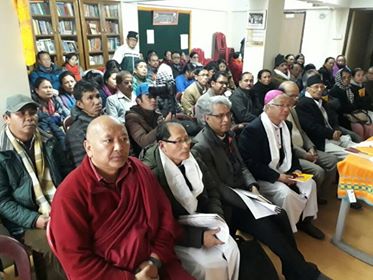 Darjeeling – In the wake of rising incidents of religious intolerance, news around upcoming Christmas celebrations emanating from Madhya Pradesh (15th December) and Uttar Pradesh (16th December), an interfaith group in Darjeeling has shown the way to religious tolerance and harmonious and peaceful living among members of all religious beliefs, 17th December.

The news from Satna in Madhya Pradesh spoke of 30 seminarians and 10 priests detained for singing carols on 14th December evening. The news from Aligarh in Uttar Pradesh tells of Hindu Jagran Manch serving notices to Christian schools not to hold traditional Christmas celebrations in their schools under threat of serious consequences (16 December).

The Darjeeling Interfaith group formed in 2005 under the leadership of Principal of Salesian College Sonada Dr George Thadathil who is also Secretary of Darjeeling Diocesan Commission for Inter-faith dialogue held a two-hour session on the theme “Peace and Harmony in the Religion.”

The meeting was held at a Buddhist place – Dharma Chakra Committee Hall in Central Plaza on Sunday from 2 pm to 4 pm.

In spite of the unusually cold weather, some100 plus inter-faith enthusiasts turned up.

“After two rounds of core-committee meeting, this is the first time that we have invited teachers from various schools and colleges to listen to experts from various faith communities to listen to their reflections on peace and harmony from their particular religious perspectives,” says Dr Thadathil commenting on the composition of the group.

He reminded all about the existing tradition of fellowship and religious harmony in the hills which has a strong interfaith bond across religious and social practices as seen especially during the event of death when people of all faiths come to pay respects to the deceased offering khadas (white scarfs).

One of the founding members of the group Prof. Irshad Ghulam Ahmed of Sikkim Central University in his reflection insisted that inter-faith meets will promote “right knowledge which only can dispel the religious ignorance that is prevalent in today’s society.”

He warned the group not to depend on “media hijacked by politicians as the sole source of knowledge.”

Sai Samity representative Mr T.R. Sharma insisted on schools and the role of teachers on the need of value education to instil religious harmony and tolerance.

Lama Pemba Tshering recalled the words of Pope Francis saying “what unites us is not religion, but humanity, love and goodness.”

Cathedral parish priest Dr Samuel Lepcha insisted that “only seeking truth through dialogue among religions can bring peace and harmony.”

Brahma Kumar Devraj underlined the need for people to be “non-judgemental, as an essential requirement for peace.” He also warned, “religion and politics should not poison the minds of people.”

Mr Anurag Agarwal, representing the business community of Darjeeling, recalled his childhood days when children in the locality from diverse backgrounds played together. The participants from the floor appreciated the venture and called on concerted action to carry forward the message to the wider society.

Bishop Stephen Lepcha, the chairman of the commission thanked the local organizers and participants for the committed participation.END

Be the first to comment on "Darjeeling Inter Faith Group Shows Way to Peace, Harmony"