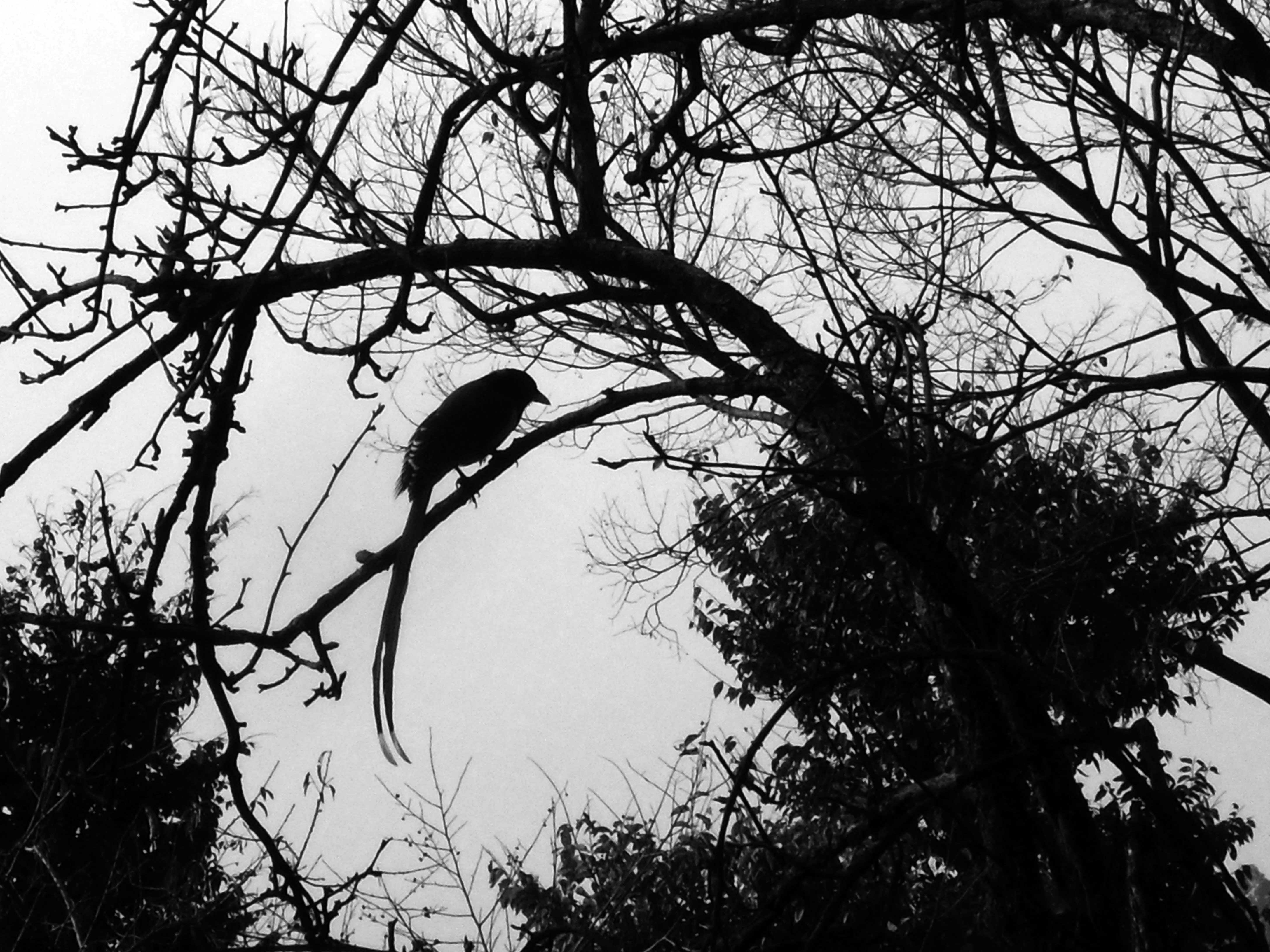 The spirits settled on the branches of the trees around the house. During the day, they were vacuous nothings held in captivity by her, roosting in their miserable state. Collected over years, they await her summons at night when she empowers them to do her bidding. When alive they were not evil people but in death, they were troubled souls vulnerable to her harnessing spells. They had remained in their time warps till disturbed by encroaching mortals. As their existence was discovered she began the hunt. Her ears were always keen to pick up rumours and gossip of strange going on. Some of these ghosts or unfulfilled spirits had managed to remain undiscovered for even hundred years or more. Each of them had some tragic death or unfulfilled desires, the turbulence of which had made them miss the crossover. In 1842 a young farmer was murdered and buried beneath some rocks in the hilly wilderness. A hundred years the area was teeming with builders. The freshly retired Gorkha Subedar-Major was very pleased with the fine piece of land he had acquired with great difficulty from the owners. Here he would build his dream house with teak wood from Burma carved by the best carpenters from Punjab. The site is rather rocky, dynamites were employed to level down the enormous boulders. The dead farmer’s resting place broke into smithereens. There was little he could do about the invasion but was very angry as one could be woken after hundred years. He created havoc and soon the buzz of strange happenings in the new house reached her. She reined him in with her powers and soon he was added to the roost. Another soul who was caught was a fakir who once lived and preached in the jungle. On his death, his followers who numbered a mere handful built a grave for him. Over the years the followers dwindled to none and the villagers also stopped coming. Nature claimed back her space and his grave sank deeper into the ground under layers of foliage and jungle growth. Half a century later, out on a recce, a band of armymen camped here. One unsuspecting Officer relieved himself at the spot where the fakir’s grave lay hidden. Within the day the healthy man suffered a heart attack and died. The mysterious death caused a stir in the village and soon it reached her ears too. The spirit of the angry fakir was caught despite much resistance as he had special powers too but all failed against Her. Sometimes some lucky ones managed to escape the roost as family members on hearing of their troubled souls conducted special rites to send them to everlasting peace.

The tasks that she set upon her roost would range from simply frights to big attacks whereupon protective spirits nurtured by people rose to the occasion. When the duel took place, it was like a full-scale laser war that ordinary mortals could not see but feel. Dogs behaved strangely during such time as they can see or sense the presence of the evil ones. Some young girls were also known to have strange bouts of hysteria as their weak auras were affected by the negativity in the air. Casualties could be in the form of a sudden death of a family dog, especially if it was black, considered to be the strongest fighters of evil. Most Gorkhali households kept black dogs to absorb the evil attacks.

She hated people. Her hatred stemmed from old slights and jealousies. Nothing gave her more satisfaction than revenge. On the face, she was a nice person, adept at listening sympathetically to woes and foes. But her mind would be dancing with glee to hear that so and so has been rushed to be exorcised or taken for ‘treatment’. With folded hands, she also visited local soothsayers and religious practitioners to check out their strength. She was talked of by people, but in frightened and hushed whispers. Nobody dared accost her. This was after all the 21st century. Nobody could accuse anyone of being a witch. She just had to call the police or the rationalists for help. Many victims went to the exorcists who would not reveal her full name but would give only her initials which were quite common, so you could not really pin her down.

Every bad person has a story and she had one too. The only daughter of rich and famous parents, she was married off at a tender age to a promising young man who turned out to be a flop. The contrast between her family and this worthless man was as vast as between a king and a beggar. Out of guilt and to help, her parents kept her, the grouchy husband and their six children with them. But it was not the same. The difference between her and the others gritted her soul to no end. She was embittered by the fact that as a married daughter, this was not her real home. Every night her drunk husband hurled abuses at her while the other couples in the Family had sweet dreams. Though much pampered by her mother, her jealousies and misery slowly allowed evil to grow in her. The only relationship she had with her forsaken mother-in-law was to learn the dark arts from her. She felt cheated by fate and it became her mission to oust everybody out of her father’s house one day and become the sole owner. Being a greedy man the husband became her partner. This was probably the only bond they had. Otherwise, they spat all the time. Strangely so, the more she schemed and plotted the sweeter her speech and countenance became.

Meanwhile, she set her spells on the Family. Quarrels and misunderstandings began. Everyone hated each other. Untimely and unhappy deaths occurred. Visitors for the night believed that the house was haunted. Only she and her brood flourished. The primary obstacles started falling. Her paternal grandparents, father, granduncle, grand aunty, young cousins died unhappily one by one. The house was now emptied of everybody except her, her family and her mother. A fresh problem developed in her life. Her youngest daughter received no suitors and despite all desperate attempts it painfully dawned on all that she was fated to remain a spinster. So, she hated all the girls in the Family circle who got married and set her roost to wreck their marriages or keep them childless. After many years her brothers retired and came home to stay. She had to move out to her own house. She got to work again. The loving brothers became bitter enemies and the Family drew battle lines.

It was the day of the annual family guardian diety Kul Puja, when a male goat is sacrificed. A very important day of redemption for the Family. If the offering is accepted it is a sign that their guardian is still there for them. The Family was under a lot of pressure. So many fights and mishaps had happened which could not be dismissed as such mere coincidences. Shadows flitted in and out of rooms, children cried at odd hours, women got into insane fits, dogs howled and disappeared. The Family was told that their demi-gods and goddesses were tied up and rendered powerless by powerful evil forces. The only hope was their guardian diety.

The evening before, a snow-white male goat was bought, fed and lovingly fettered by the family for the auspicious occasion. Now she had a spy. An old maid who milked the cows for both the houses. Spy for some odd reason looked just like her. A dirty, wizened and poor version. Spy informed her of the preparation for the puja in the Family house. As night descended she set her most vicious lot onto the job. Go and possess that stupid goat and make him impure for the deity, she ordered. Obeying her bidding they flapped off in a fraction of a second and entered the poor, unsuspecting goat. The next morning, the rites began. At 7 am, the goat was brought forward for the sacrifice. Anointed and garlanded, it had to give the signal of acceptance by the deity before the sacrifice. To everyone’s horror, the goat broke its strong rope and bolted out of the house towards the gate and then down the road. It was chased for quite some time but to no avail. A local guy found it and brought it back. It was tied up but it managed to slip its head out of the noose and skipped off again out of the gate. A family member followed in hot chase. Horror upon horror, it bounded down the road for about a kilometre, past several houses right through her gate and disappeared right into her verandah. When the relative returned empty-handed and related the incident the Family was stunned. It was already 10 am. Time was running out. Another goat was hurriedly bought and readied for the ritual. The priest started his chanting, but the goat number two did not give its signal of acceptance. Unlike the other, this one was calm but unrelenting. The Family begged and pleaded before the animal. A sense of doom and gloom prevailed in the household. Forgiveness for any trespass was sought from the guardian diety begging him not to desert them. Even the little 4-year-old son of the family prayed hard. It was now 11 am. Suddenly with a shiver and tossing of a head, goat number two gave the signal of acceptance. The Family was relieved. The sacrifice was made in one swift and clean dive of the khukuri. Tears of relief and joy flowed out of the family’s eyes. The battle was won. All the rituals concluded, by the time the meat called prasad was cooked it was already late afternoon. Finally, as per the custom, the leftover remains of the animal were buried deep into the ground before sunset. The Family was very tired at the end of the day but happy that their guardian deity was still with them. The fate of the runaway goat number one was unknown and nobody dared investigate. For the Family, it had been a strange day but with a happy ending.

Be the first to comment on "The Roost: A Supernatural Short Story"