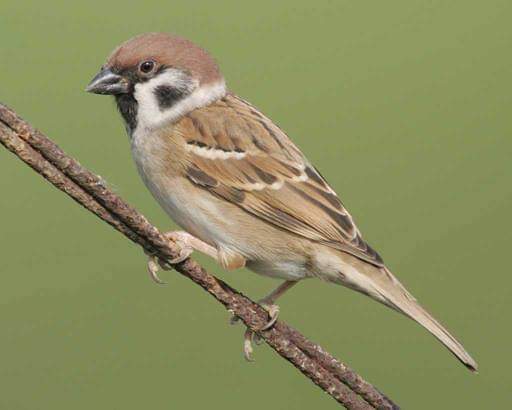 
It was just another April morning. My eyes were half awake and my fingers were already scrolling the phone screen shuffling between the headlines and news articles corresponding to my conventional practice of starting a day. Just then, I happened to come across a picture of a bhangera – sparrow. The moment hit me hard somewhere and took me for a long travel down my memory lane.

I had never noticed the thing, but then the sparrows were long gone from our place, or maybe we killed them ourselves. Sparrows were the most common birds around during my younger days and so I never paid a heed to notice them carefully. But then, in the pictures they looked more beautiful than they ever did.

I suddenly went back to the time when I was a kid who was in his lower classes of nursery school and of which I have only some faint memories left – the time when the street down my village was still to be carpeted. The good old years when snowfall was a yearly phenomenon and the sparrows, as I say, were to be seen abundantly.

I slowly started reconciling things and how the events unfolded to change everything around completely and this was the first time I was contemplating about it. The changes were moving too slowly under the shadow of time and things were too blurry for us to be thinking that something wasn’t okay; something wasn’t as same as it was yesterday.

I was growing up during the days when there were less than half the numbers of homes around our village than we have today, and I am sure it was the same for the rest of the town. A significant part of the village was green and things overall were very different – more like a John Denver song painting your thoughts under a starry sky over a glass of wine.

It is not only about the sparrows, it is significantly everything that I don’t see around our place today and the things that hold a massive chunk of my childhood memories. We would have a lot of pigeons around, and when I say a lot I seriously mean a lot. Now Chowrasta and the Chowk Bazaar are the only places left where you can see a considerable number of pigeons, while regular places and the house roofs are limited to rare visits by a few pigeons.

The Ruppees and the Doves can only be spotted if you walk through the very little forest like areas left around, and provided you have all the luck of the world. The persuasions were deep back then- Persuasions of going outside and play, to create a bond with the nature, the greenery and the trails.

Talking about the plants and trees, the only one to sustain the hard hit blow of development are the pine trees that even after losing too many of the ones in their family still manage to stand the ground. The Sisnu is trying its best to survive on the last remain patches of unused land, creeks and slopes or along the sides of the jhoras. I remember my first encounter with sisnu when someone had tricked me to hold its stem, leaving me in pain and tears. The same person later suggested me to apply my mucous on it for relief. Since then, they had been a part of my growing up. From creeping under a bush avoiding any contact with it while we walked through the “shortcuts” during our play time, to tactically slipping your hand inside the bush to recover your chungi or cricket ball – sisnu has stood it all. The epic memories however are of those threats from your parents and teachers to treat you with sisnu pani, that too “nangai paarera”.

Ban Maara and Tittey Paati on the other hand would be the instant remedial herbs for cuts and wounds sustained during the play. And similarly we would have Gol Patta for sore throat. They would be anywhere and everywhere throughout the hills. And these days when one has funeral at his place, he has to go around searching for tittey paati.

A few minutes of thought lead me to realise that the list was not limited to Banmaara, Tittey Paati, Sisnu or Gol Patta. Isskus, that would grow anywhere wildly, now only responds to cultivation. Gham Phul (small sunflower like flowers), Ghanti Phul, Powder Phul (small purple flowers with powdery white substance over them), Aiselo, Asera, Timbur, Aaru Cha, Aaru Bagara, Unyu (ferns), Bhadrasey, Thotney, etc are almost lost too or atleast are reduced to grow only at a handful of places. Even the Saipatri flowers these days are only to be seen at the market during the festive season and nowhere to be grown, except for a few privileged gardens of course.

The butterflies no longer are seen sprinkling their bit of beauty over the place, neither does the dasai kira feels itself homely with us. The kids no longer may catch lady buds from among the bunch of flowers and the friends may not be able to stick up the sticky wild leaves on each other’s back.

They certainly won’t know the feeling of sitting under an aiselo bush and enjoying the sweetness of the yellowish or orange berries on it. They won’t be loading their bamboo pyaat-pyaateys with aseras and timburs to hit each other. The wild yellow flowers won’t be a part of their play.

We have sadly killed the sparrows, the pigeons and all the unique plants we had. I don’t remember if the sparrows made a sound, but then its absence adds on to the silence in a distinct way. Our good luck now remains limited only to the milk containers these days as a pair of Ruppee would never make its way back to our home. The butterflies if alive should be missing all the flowers and the dasai should be missing the dasai kira. There are no stories of hunting down Kalej into the jungles, neither are there the mesmerising songs of Gauthali. No paraal and no khar. The only khar ko ghar to be seen anywhere would be the one below the tea stalls of Chowrasta, serving the photo interests of the tourists.

Be the first to comment on "The Lost Charm of Darjeeling: Of Bhangera and Aiselo"