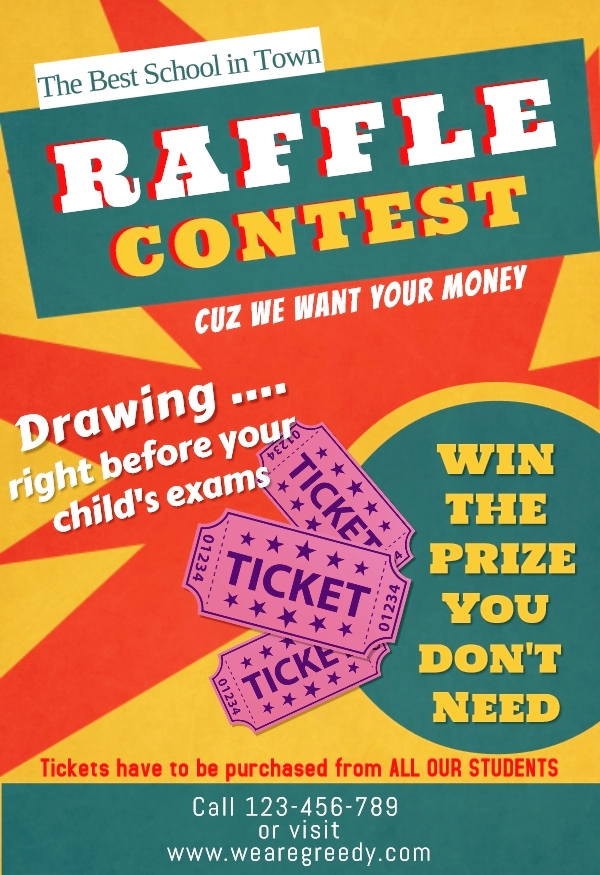 We Are Greedy School Raffle

I remember when I was in still in my nursery school, a very new concept was evolving that would later become a trend – The concept of School Raffles. Education in the hills has witnessed great many changes in the recent decades, and one of these changes has been rapid commercialization – a sad one indeed.

Now coming back to the point, I myself have never been subjected to such culture of “fund raising”, except for once when we were given raffle sheets of a small amount to support a fellow student who was fighting some kind of disease – for a very valid reason, to say. But then, I would always see my friends from other schools trying to sell raffle every year.

I hadn’t given much thought on it. But recently, I came across a little kid in my neighbourhood trying to sell lottery tickets. I took a closer look at it. The lottery was issued by his school, each ticket came at a cost of Rs. 20, and a list of ludicrous prizes were printed on it. The purpose behind the lottery was also mentioned on the ticket – it said “for building school ground”.

We all know that education is as of now one of the most flourishing businesses in the hills. And when normal means of profit making doesn’t satisfy the management, they resort to such unscrupulous ways of earning, every year on a constant basis.

If you notice it closely, there is a definite pattern that the schools follow.

The prices of the tickets vary along the repute and the economic stature of the schools, and for some very “reputed” schools, the prices are surprising. The maths is simple – You give education, you charge for it. The school fees incorporates in detail all the expenses that need to be accounted plus the profits, including vacation months when the schools remain closed. There is a special section in the fee receipt that says ‘development fees”, and even if it isn’t mentioned, it is anyway incorporated one way or the other.

So, if a school is already charging for all its necessity, why put an additional liability on the students and thus to the society?

Moreover, the lotteries are never a part of the school’s contract with its students. Not just lotteries, the schools have through the years evolved a network of systems that can suck out money from the people. Uniforms, books and copies, bags, accessories, magazines, fetes, and the list runs longer.

Education for us has always been important, and schools in the hills have been the most sacred institution. Whatever a school says is right for us, and we never mind to question the decisions of the school and humbly submit to their demands.

I maybe wrong at many places here, but yes I believe in what I have said. The society may come forward and contribute if a student in some school has some ailment and genuinely needs help. But please stop bothering people for building your ground, terraces or simply raising your bank balance. We Are Greedy School Raffle

Mahua Moitra and The Early Warning Signs of Fascism

Be the first to comment on "Schools, Raffles, Lotteries and A Humble Question – Why?"