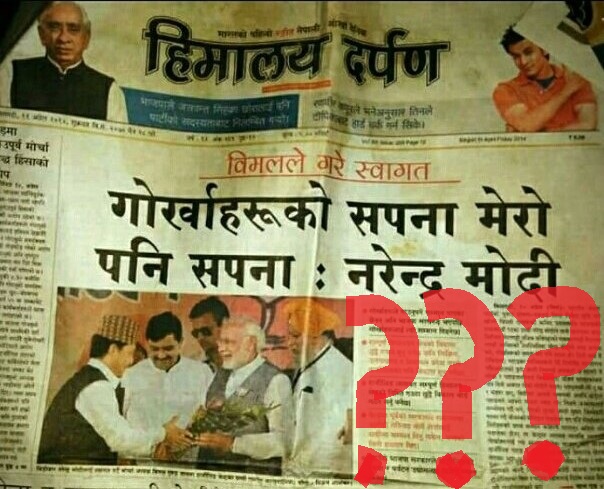 Ahead of 2014 general elections, BJP had in their election manifesto that they would consider “the long pending demand of the Gorkhas”. PM Modi delivered his speech in Siliguri on April 2014 and one famous line of his speech among the Gorkhas was – “Gorkha ka Sapna, Mera Sapna”. This assurance had indeed made Gorkhas believe that this person if elected to the highest office would definitely fulfil the only dream of Gorkhas- a Gorkha state. The other tall BJP leaders like Sushma Swaraj, Rajnath Singh and Subramanium Swamy have supported the cause of Gorkhas both inside the parliament and in public. The present HRD minister, Mr Prakash Javedkar had even said during UPA II that BJP supports the creation of a separate Gorkha state. He made this statement at the official BJP press conference when Telangana formation was being discussed. But it seems that the rise of Modi-Saha duo has changed the entire dynamics within the party and the formation of Gorkha state probably has been black-listed.

It has been a long struggle for the demerger of our Darjeeling and Dooars which were officially merged with West Bengal in 1954 under the Absorbed Areas Act. Today if we are to settle for any other setup within Bengal then it would be a very gross injustice to the 1200+ martyrs from the past three Gorkhaland agitations. Gorkhas are determined even after all the downfalls. There is a silver lining even in the lowest of the times and the future is for those who work for it. We have examples of such determination when on 10th February hundreds of Gorkhas had flagged a relay marathon from Darjeeling to Delhi along with seminars advocating Gorkha state in Patna, Banaras, Aligarh and Delhi Universities. This Kranti or inqalab, whatever one chooses to call it, is never going to cease until our goal is met.

The recently held National Gorkhaland Committee (NGC) conference at New Delhi in the presence of two Supreme Court lawyers had a discussion largely on the feasibility of the sixth schedule in Darjeeling region. The primary concern was whether the sixth schedule is suitable for an area with the non-tribal majority? The same ambiguity cornered Gorkha National Liberation Front (GNLF) in 2007 that brought Gorkha JanMukti Morcha (GJM) in the forefront. Now the same GNLF party has been batting for this extended Panchayat provision. However, one cannot deny the inconsistency of the sixth schedule if it were to be implemented in the Darjeeling and Dooars region where the strong opposition is often encountered from the non-tribal population. The slightly similar scenario was in case of Bodoland Territorial Council (BTC) which had only 27% Bodos of the total BTC population where with few other non-Boro tribes raised the tribal population. The parliament duly made some necessary amendments to accommodate the non-tribal in the autonomous region and also granted ST status to the Bodo Kacharis community following the BTC accord. Moreover, the sixth schedule may offer some degree of legislative and judicial powers but still, the area will remain under the state govt. Binay Tamang must reckon the number of times that he can ask money from the Bengal Govt in the name of development. As far as the people are concerned, development alone has not been the only and the real aspiration. The real aspiration is to have the Gorkha state that comes with a constitutional guarantee which the entire vault of Bengal cannot buy.

We have BJP leader, Subramaniam Swamy and some prominent RSS members suggesting the Union territory status for Darjeeling and Dooars region. Given the strategic importance of the region, sharing borders with three countries and closer to the tri-junction Doklam, it would be in the interest of the nation that this region be directly administered from Delhi with certain provisions like having legislative assembly, council of ministers, representative to the upper house and UT’s own high court or the nearest Sikkim High court.

Some of my friends who are the benign BJP supporters often claim that the BJP govt will surely do something for the Gorkhas before 2019. There lie some serious questions as what can we expect from the BJP govt? Is it the same Gorkhaland Territorial Administration (GTA) kind of executive power which does not involve parliament or Schedule Tribe (ST) status for 11 Gorkha communities? because if we are to be a bit rational there is no reason for us to wait until May 2019. Gorkhas have been struggling over a century for proper recognition which can certainly come only through constitutional amendments. Thousands of Gorkhas have been martyred not for executive powers or ST status but for statehood. We have waited for enough and let’s not be stupid by waiting until 2019. The BJP govt has to take the Gorkhas issues to parliament for the constitutional amendments if they are really concerned for Gorkhas and if at all they are committed on their words which they have made before every election.

SEE ALSO:  A Beautiful Tale of the Disgusting “Sigaan” and the Perils of the Wonderful Winter Season
Powered by Inline Related Posts

The parliament has only two sessions left before 2019 elections which are monsoon and winter sessions of 2018. As we know that there cannot be any budget session before the general election and if the election is held on time. All the legislative functions have to be done within these two sessions. Therefore, if the govt has any concrete plan for the Gorkhas then that must be done by the winter session of 2018. The winter session ends by the second week of December. It will be a litmus test for the BJP govt after the two sessions of the parliament and by that time we will be getting our answers straight.

We must be cautious as some may say that it will be more prudent to have a clean chit from West Bengal if we are to form a Gorkha state following the Vajpai code of forming states. So, to remind such school of thoughts, even for a bold monetary policy like demonetization none of the states was consulted. Mamata Banerji compared demonetization with the financial emergency. Besides, Modi in 2018 is far more powerful than Vajpai was in 2004. So technically, there isn’t really any hurdle for the Modi govt in bringing the Gorkha state formation bill.

The jobless youth, distressed farmers and religious disharmony have contributed enough to the anti-incumbency factor. The rising crude oil price is another thing to worry about which is likely to increase the revenue deficit of the country. The repeated failure of the govt has been observed over the past three years as they have been unable to meet the expected fiscal target. The high fiscal deficit can affect the economic health of the country. The fiscal uncertainty after demonetization and GST along with the above-mentioned crisis can possibly delay the promises made by the govt in the earlier elections. Thus, affecting the popularity of Prime Minister Modi. It is therefore very likely that the govt may call for the snap election in Nov 2018 along with other assembly polls to bypass the huge undercurrent that has been developing against the central govt after they have been unable to keep their big 2014 election promises. The early election means only one parliamentary session will be left i.e. the monsoon session which will end by August 2018. This is imperative for us to know that our demand can be met only if the govt makes the required constitutional amendments. This timeline must be anticipated and it is high time that we wake up from the slumber and smell the coffee.

Binay faction of GJM and GNLF has decided to support Trinamul Congress for the Darjeeling Lok Sabha seat in 2019 general election and thus changing the gear of the politics in the hills. Amid such situation, does BJP have any plans for Darjeeling? Is it that they have materialized enough from Darjeeling that they now take Gorkhas as their liability? Does BJP want to disassociate themselves from the Gorkha issues since the bhadraloks have more stake in the parliament? Does Modi mantra of “Reform, Perform and Transform” apply for Darjeeling? Is “Gorkha ka Sapna still Modi ka Sapna”? These are some of the very pertinent questions which they have possibly tried to answer with the indifference that they exhibited when 13 people were mercilessly killed by the Mamata administration during the 2017 Gorkhaland movement. However, we must ask our MP Ahluwalia, now a Union Minister and the BJP govt on the issues for which they have received our mandate for ten years. The Telegraph has reported that MP Ahluwalia will be visiting Siliguri to inaugurate the reopening of the passport Sewa Kendra but it is still unknown whether he will visit Darjeeling and address the people. Reform, Perform and Transform for Gorkhas only mean a Gorkha state.

It is more apparent that the BJP is unlikely to draw a single seat from Bengal in the next general election. There is also no chance for them to form a majority govt at the centre. Therefore, instead of missing the bus again we must mould the iron at the time when it is hot.