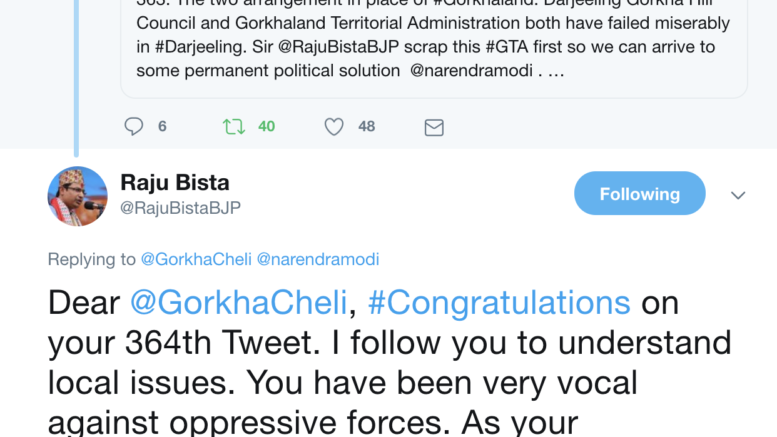 
GorkhaCheli, a Twitter personality from Darjeeling has recently been in the news for completed her tweet series for a year. Despite her hectic life as a profession, wife, and a mother, she manages to find some time and takes to Twitter to participate in discussions on different issues concerning the nation and its politics. On Twitter, she is a strong voice and uses the social media platform to raise local issues, especially her hometown Darjeeling.

For the past one year, @GorkhaCheli has been making one Tweet everyday addressed to the PM, Narendra Modi. Her tweet series is a precise day-to-day documentation of the most important political issues of the region. In an encouraging sign, the recently elected MP from Darjeeling replied to her 364th Tweet promising to take her concerns to the highest level.

Not one to give up so easily, @GorkhaCheli has suffered enough setback, right from threats by local political parties to online trolls who even threatened to harm her family. But that hasn’t stopped her from raising the issues. TheDC has been a proud supporter of @GorkhaCheli and we sat down for a small tete-a-tete with the woman herself. Here is the interview:

It was not planned. Some of us on Twitter were discussing how our voices were not being heard even after sending thousands of tweets by so many of us. So, it was impulsive on my part and I decided to remind our PM of his famous words “Gorkha ka sapana, mera sapana.” I then decided to directly Tweet him every day until he responds and kept highlighting all our local issues, the struggle for democracy, and the sacrifices made by the Gorkhas. I have also criticized the Prime Minister and his party, the BJP so many times for their silence. I feel that during the 2017 agitation, we were left us in the lurch just when we needed their support.

How has the series been received?

Those who know me in Twitter were supportive from the beginning, but there were detractors too. Some said I was being naive, some said to send the print out to PMO, some said I was nagging, while some just thought I was foolish. Many of them even laughed at me and told me to stop.

The problem in West Bengal is that that moment you say ‘Gorkhaland’ they quickly label you like terrorists. It cannot get low than that. However, I was never perturbed by the trolling or negativity that came with it.

We often see that you are constantly trolled for writing everyday to a non-responding PM. How do you take such things on your stride?

I learned to take things in stride and even joked around that my Tweets to PM was supposed to be a dialogue but unfortunately ended up as a monologue. But all this while I had some great people around me to always support me.

In the past one year, how did you see the politics of the region unravelling through your Tweet series?

After 2017 I felt we were at political doldrums. Nothing positive or even a hint of positivity was left for us. The people had almost given up hope and there simply was no end to the darkness. Although subdued, I felt that people were just waiting for a change in the politics of the region.  I also discovered and now have huge respect for the patience that our people have shown in this democratic process. The dissent against the government and caretakers appointed for the Hills was evident, but people couldn’t do anything due to pressure of the police and the local administration. The only hope for a change was through the ‘Right to Vote’. And what happened when people got the chance to exercise their voting power in the recent elections does not surprise me.

What do you make of the recent mandate that BJP got in Darjeeling and West Bengal as a whole?

For us, it was important that we get an MP candidate who will understand and relate to the sentiments of the people. However, winning with such an overwhelming margin felt like the win has restored the dignity and self-respect of the people. The win was a necessity for Darjeeling. Every voter knows that the win does not necessarily mean that we will have statehood when we know that the rest of Bengal is strongly against it. But with such encouraging results, I am hoping our issues will find a stronger voice in Raju Bista. For those who know about Darjeeling, it is understood that the politics her is not between us and the rest of Bengal. We have just been highlighting the history of Darjeeling, and how the current setup in the Hills is just a temporary arrangement to ease the work of administration.

How do you plan to take forward your objective of directly appealing to the PM?

While I will continue to speak for a separate state or UT, I also plan to highlight all the current situations, happenings, and achievements of the Hills people. My main focus has always been to create awareness about why historically and constitutionally our demand is legitimate. To let the nation know Gorkhaland is not fighting for separate country but a state within India. It is not to create rift or division, but to bring in support for our cause.

Why Twitter and why not any other social platform?

Twitter has a wider reach to the right people. I have seen how social media has an impact on various issues and especially how protests on Twitter can bring the change. Only in our case, we are a very small group which almost feels like close-knit friends now, raising voices for our issues. I am lucky to interact with well informed and insightful people who are well versed on our issues. Their support has been always a strength when I was trolled or even questioned our character. I am forever indebted to few who have been constant strength for me in the media where trolling can really nasty. I remember one such person who requested the new members to be active even if it is by tweeting songs. I do that too. I hope we get many more members in there so we can be heard. Strong and loud.

Thank you @GorkhaCheli for your immense contribution to building our online presence and narrative on Social Media. We look forward to reading your insightful tweet every day and hope that the Prime Minister himself takes note of your efforts someday. We will continue to rally behind you until then.