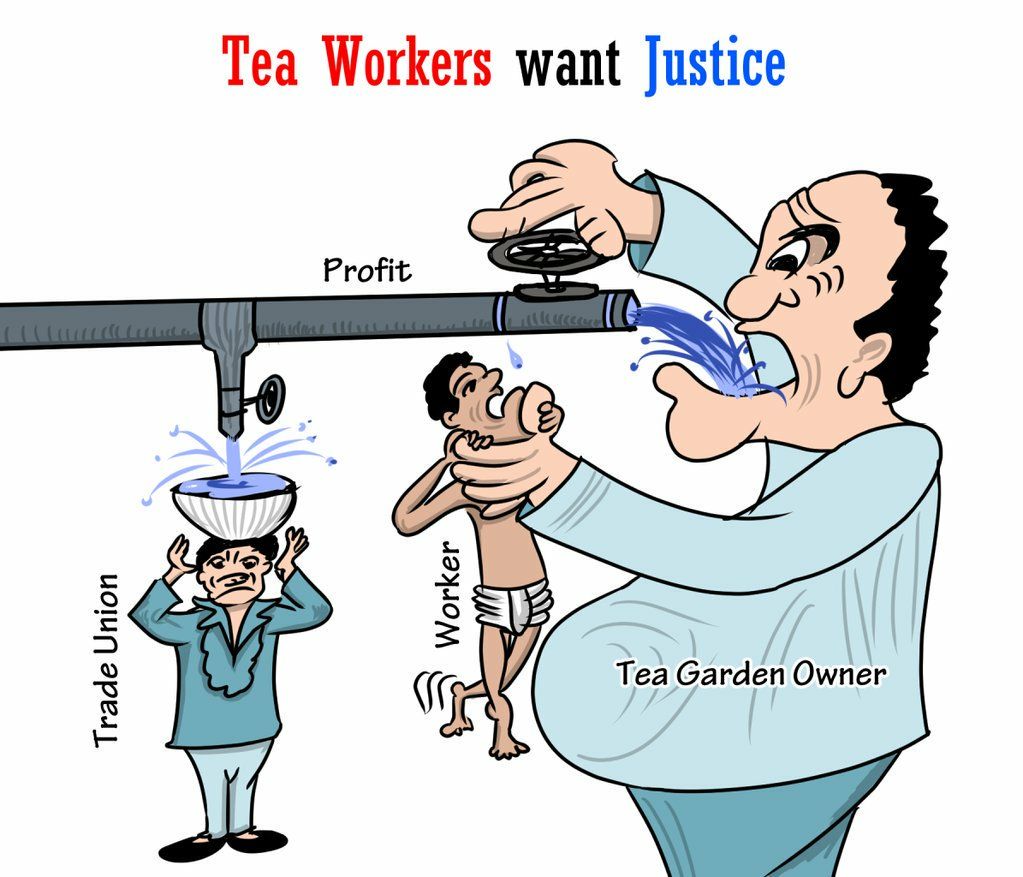 The most valued brand of all the tea around the world is our own homegrown Darjeeling Tea which has a tag like “champagne of tea” and some refer to Darjeeling as “Mecca of tea”. The total tea production in Darjeeling is less than 1% as compared to the gross national production. However, the quality of Darjeeling tea has always attracted the international market and most of the premium quality tea are all exported to the foreign countries. DARJEELING word and logo is the first Geographical Indications to be registered in India, under Geographical Indications of Goods (Registration and Protection) Act, 1999. The DARJEELING logo is copyright protected and registered with the Copyright Act, 1957. Darjeeling word and logo are protected as Geographical Indications and as Certification Trade Marks in European Union, USA, Australia, Egypt, Canada, Russia, Lebanon, Japan and Taiwan. The Makaibari Tea, an iconic Darjeeling tea brand, has created a record by booking orders at a record price of $1,850 per kg (Rs 1.11 lakh). Usually, most of the owners have never disclosed the market price of the premium quality tea.

Plantation – a colonial and regressive system:

Tea plantation was started at a time when there was no concept of civil rights and slavery was legal in America. The first tea plantation in Darjeeling was established in 1852, during the industrial revolution. The business model with the primary objective of profit maximization. The colonial set up left by the British is still in place run by the neo-colonialists. The tea-workers and their families who have lived and worked for more than 150 years now contributing to both the state and national exchequers for generations have no land rights. Daily wage earners, the main stakeholders have never received the profits in the form of wage or bonus. The labour in the plantation are the most exploited workforce in the organised sector where the licence of the tea companies are granted by Tea Board, a statutory body under the Ministry of Commerce & Industry, Government of India (GOI) formed in 1954, under Section (4) of Tea Act 1953. A regressive set-up like plantation is against the human development and denies the workers in pursuing the basic human needs like to explore, to grow, to develop and to maintain the highest level of self.

The Plantation Labour Act (PLA) 1951, directs the garden owners to provide housing, medical, ration, educational facilities for workers ward, water and other welfare facilities. The tea estates of Darjeeling hills have severe scarcity of drinking water. Natural spring water and Jhora are only sources of water. Almost all the tea gardens have no creche and labour welfare officer. The tea workers condition of Dooars are far worse than it had already been. A writ petition was filed in supreme court by the International Union of Food & Agricultural Workers and it was observed by SC in 2010 that hundreds of workers have died of starvation due to cut in ration supply and unavailability of drinking water since 2002. The reports were submitted in the court that the workers had to drink water from the contaminated river streams. It is appalling that both the central and state government have not taken any strong measures in solving these problems. The court had directed the central govt to carry out its statutory duties in the mismanaged tea gardens.

The Tea Act, 1953 binds the central govt to grant relief to the workers under any critical circumstances like the govt in the past have granted thousands of crores of relief fund to the farmers in Maharashtra, Madhya Pradesh, Karnataka and in various other states. This Act also empowers the Central Government to investigate loss of the tea estate, can undertake the tea unit if the owner has absconded after mismanagement or have habitual default in the payment of wages, or provident fund dues of workers and other employees. I wonder why the GOI hasn’t carried out any independent audit in all of the tea companies with transparency and adequate disclosure as their perpetual lies of running in loss has become habitual.

The nexus of the owner, state and central govt :

The administration of tea gardens are under the state government whereas the tea industry is controlled by the union govt. The power which can be used to improve the living condition of the workers lie with the state authority. The chief minister had promised on September 2017 that the tea labourers would get their 2016-17 bonus in two installments. First before Diwali 2017 and the second installment after Diwali. It has been more than five months and the next Diwali is approaching but the labourers have not received their second installment of 2016-17 bonus. The tea companies have always flouted the labour laws under the nose of the state and union govt. Since, the payment of bonus to industrial employees is mandatory under the Payment of Bonus Act, 1965, on the basis of the employers’ earnings in the previous fiscal. The PLA 1951, directs the state govt to enforce the minimum wage under minimum wage Act (MW) 1948, for the workers revised every five years by the GOI. On June 2017, the Labour Ministry, GOI after observing the rising consumer Price Index for industrial workers had issued a direction to all the state/UT govt to enforce the MW. It was also mentioned in the same notice that the MW must not be below Rs 176 per day, w.e.f. 01.06.2017.

The Bengal govt has always been under the influence of the tea garden owners and as a result of which the MW has never reached the labourers. The unskilled workers in Beedi factory in West Bengal are given more than the prescribed MW directed by the Labour Ministry of GOI, (info available in website of Labour commissionerate, Govt of WB) whereas the Tea workers in Darjeeling are paid as low as Rs 132 per day. This indifference of the Bengal govt compels any right thinking person to question whether the wage disparity is due to the fact that the tea labourers in West Bengal are largely from Gorkha, Rajbanshi and Adhibasi communities. The MW for the plantations workers in the neighboring state Sikkim is Rs 300 per day, in Kerala Rs 350 per day including the health insurance, in Karnataka it is Rs 263.29 per day and in Tamil Nadu Rs 241.31 per day. There lie the difference in the will of each state governments and disinterest of the Bengal govt in implementing the MW. The “belayati saheb” attitude inherited by the political class in kolkata are the real bourgeois and fake socialists.

Tea industry is considered both as an agricultural and industrial activities. Corporate tax is imposed on 40 percent of the profit, agricultural income tax is imposed on the remaining 60 percent under Income Tax Act, 1961. Tea is one of the major contributors to the state exchequer through GST, plantation tax, agriculture income tax, basic land tax, professional tax, income tax, etc. Tea industry has been benefited by GST in the form of input tax credit that was not available previously. The second source of revenue for the state govt from Darjeeling is the “tea-tourism” as thousands of tourist comes Darjeeling to explore the century old tea gardens and its scenic beauty. In 2013, the former President of Darjeeling Chamber of Commerce, B M Garg had claimed that the tea industry in the hills generates an average of Rs 450 crores revenue annually, which is equal to the revenue from the tourism in the hills. So, according to him, the total revenue from Tea and Tourism is 900 crores annually leaving aside the revenue from timber and hydroelectricity. Former PM, Dr Manmohan singh compared Demonetization to an organised loot and legalized plunder. The “organised loot and the legalized plunder” has been happening in Darjeeling since the inception of the tea plantation. It is not only the draining away of the local natural resources but also the unfathomable exploitation of the human resource.

With a pinch of salt :

The total population of Darjeeling hills from 2011 census was twelve lakhs (total 18 lakhs, six lakhs from non Gorkha majority plains). Darjeeling has 87 operational tea Gardens which directly employs more than 85,000 odd workers. Considering, a family with an average of six members makes a total of more than five lakhs of the total population of hills who are directly affected by the tea industry. The people from Darjeeling town so far have not been able to relate with the core problems of tea workers. Only handful of them have expressed solidarity and supported the workers issues. It must be realized that the community becomes stronger only when the weaker section of the community are strengthened. Ignoring the tea garden issues is not going to benefit the community. Therefore, if the core issues of the workers go unaddressed then it is for sure that the political future of the community is certainly going to have a downward trajectory. Ignore the tea-worker’s issues, their basic human rights and days are not so far that the we will have a neighborhood with the settlers, not less than a hundred km down from south and far south-east. Sooner the realization, better for Darjeeling-Dooars. The famous French philosopher, Vilfredo Pareto said – “It is the task of the elites in any society to provide the leadership to maintain the equilibrium of the social system”.

SEE ALSO:  Darjeeling-Walking Through The Mists of Time
Powered by Inline Related Posts

Firstly, the fact that the land and land reform is a state subject and that the total land engaged for tea production across India is close to 1.4 crores acre which makes the “nationalization of tea garden” untenable under the federal structure of India. The least central govt can do is an undertaking of the tea estates under Tea Act 1953. The undertaking doesn’t seem to be a good idea as its been more than two years that seven sick tea gardens of Duncans were undertaken by the central govt still they haven’t recovered yet and the workers condition has not changed at all.
Secondly, the Gorkhaland Territorial Council (GTA) was formed from a concept called corporate governance. The position of chairman, chief executive officer, executive and non-executive positions are all found in the board of the corporate structure. The signing of the GTA agreement was a mockery of the Gorkhaland supporters made by the leaders then,

IF GTA had some extra powers –

The above mentioned four departments are the state subject under the constitution of India. The transferring of which can only be done by passing a separate bill in parliament. The PLA 1951 and Tea Act 1953 also must be duly amended. If these extra powers were under the GTA then they perhaps could have addressed the workers problems.
The observation can be made here that the permanent solution of the issues of both the tea workers and people of Darjeeling-Dooars cannot be solved unless the issues are taken to the parliament.

The tea Labourers should be aware of their rights and the people who are informed on Labour rights, must guide them. The inspirational story of 4000 odd tea estate workers of Kannan Devan Hills Plantations must be shared as much as possible. In September 2015, the women tea workers filled the streets of Munnar hill station without any trade union and political leaders. The women workers alleged that the trade union leaders had cheated them and was not working on their behalf but in the favour of the management. THE WOMEN’S PROTEST WAS SUCCESSFUL AND THEIR DEMAND OF 20% BONUS WAS ACCEPTED BY THE MANAGEMENT WITHOUT ANY TRADE UNION LEADERS.