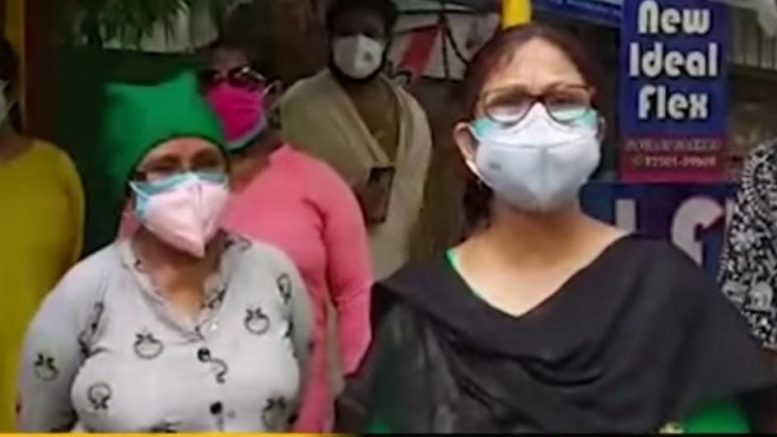 
Private hospital in Siliguri have often come to disrepute due to their shoddy treatment practices and overinflated bills. Almost everyone in the region has a horror story or two to share when it comes to dealing with private hospitals in Siliguri. But many are concerned with what Abhishek Sarkar, whose parents died just recently, had to go through. They are calling out the inhumanity exhibited by one of the private hospitals, which has forced a son to hit the streets in protest, while he is still observing the funeral rituals of his parents, alleging misappropriation of billing by the said hospital. He stands in the streets joined by his well-wishers who are outraged at the “lack of medical and moral ethics” on part of the said hospital.

The issue of irrational inflation of hospital bills in Siliguri has been haunting the middle-class in the region, since the arrival of COVID-19, which has become worse through the second wave. This time around, people have been left to fend for themselves by the State Govt. No special effort has yet been made by the Govt to check the blatant exploitation by private hospitals. Several complaints are erupting from various private nursing homes in Siliguri regarding the billings, the extent of some of which is beyond the means of any normal family to afford. The blatant loot perhaps results from the lack of adequate public medical infrastructure in North Bengal, as a result of which the people from the entire region are having to depend on the private hospitals in Siliguri.

In other states, governments have stepped in to put a cap on the COVID treatment. In Uttar Pradesh the most a hospital can charge is Rs 15300 per day and includes the cost of bed, food, amenities, PPE, and all treatment relevant to the condition. The rates will also club the cost of management of underlying co-morbid conditions like hypertension, diabetes among others. Even the best private hospitals in Delhi are today charging Rs 18000 per day for COVID treatment, following a cap put by the state government.

But, in West Bengal, there is no such provision, yet.

In our region, the aggrieved people don’t dare to raise their voice against such instances, as they are already too stressed to be protesting. Moreover, the respect for frontline workers who are battling this pandemic prevents many others from speaking out, as no one wants to paint these brave hearts in a bad light.

But, what are people to do, when hospitals become more concerned about profit-making than treating the patients?

Abhishek, a resident of ward no 18 in Siliguri, had a similar experience, which he is not willing to accept, and has decided to take a stand against the alleged wrongdoings that he has faced. After his entire family tested COVID positive, he and both his parents had to be admitted to a private nursing home at Collegepara in Siliguri on 2nd May.

He was discharged from the hospital on 11th May after recovery, and a bill of over Rs 1.77 lakh was produced against his treatment.

Unfortunately, though, his mother died on the 20th May, followed by his father just 4 days later on the 24th May.

To his surprise, the hospital had billed him over Rs 7.3 lakhs his mother and later, over Rs 8.3 lakhs for his father. A cumulative bill of over Rs 17 lakhs for the treatment of 3 people staying at a hospital for a cumulative period of 49-days was something unimaginable for Abhishek. While the first two bills were already taken care of, receiving the enormous bill for his father opened the floodgates of outrage he had been holding back.

Abhishek alleges the nursing home of producing inappropriately inflated bills and expresses his disappointment on the rates that have been mentioned in the breakup of the bill. He further said that the nursing home in both the cases only informed him about the demise of his parents, immediately after he expressed that we would take them to the NBMCH respectively.

Following the situation and unable to pay the entirety of the demanded amount, Abhishek reached out to the local leaders for help, who in turn took the matter to the concerned authorities, after which his father’s dead body was released by the Nursing Home. But getting the politicians involved didn’t go quite well with them, who, as alleged by Abhishek, have allegedly “threatened him of legal consequences in return for non-payment of the outstanding bill, which stands around Rs. 5 lacs after the deducting the advance and the payment made by his insurer.”

When we contacted few doctors to comment on the situation, they said that “any treatment involves the usage of different facilities, equipment, and medications, and so a proper remark could only be made if all the details are examined”.  They however added that the “amount seemed very improbable”. One of them also suggested that “the patient family should approach a medical expert/doctor with the detailed bills and get them scrutinized, following which a complaint could be filed if misappropriations are to be found”. “There are numerous organizations presently that are working against the extravagant charges by the hospitals, which would be happy to guide the patient family”, he added.

In fact, Abhishek himself is planning to file a complaint against the nursing home.

We, on our side, with very limited knowledge of the medical field, do not know if the hospitals are right or wrong. We are still surprised by the kind of bills that the hospitals are producing in the wake of COVID, which is completely inconsistent with the pre-COVID times. When people were already bothered by the outrageous commercialization of healthcare services, such added burden, if the allegations are true, breaks the backbone of the trust that remains on the private institutions.

Note: We tried to reach out to the hospital concerned for comments, but couldn’t. So we are posting the story, without naming the hospital.

Youth March for Peace in Siliguri

Be the first to comment on "A PRIVATE HOSPITAL IN SILIGURI ACCUSED OF OVER-BILLING: Son Forced to Protest, Both Parents Dead"