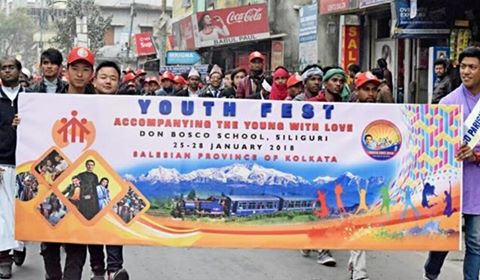 Siliguri — A group of young people holding a four-day international youth festival held a peace rally witnessing to the fact that in spite of racial, ethnic, linguistic and religious differences, it is possible for humanity to live in peace.

Some 500 young people belonging to Don Bosco group of institutions from the states of West Bengal, Sikkim, Bihar, Jharkhand, and neighbouring country Nepal participated in the peace march held on Saturday 27 January.

Accompanied by their teachers and mentors – Salesian Fathers, Brothers, Salesian Family Sisters, Teachers, Salesian Alumni and other esteemed dignitaries marched along with young people in Siliguri, the second largest town of West Bengal and the gateway city to Nepal, Bhutan and hill stations of Darjeeling, Mirik, Gangtok.

The youth fest spreading the message of peace, joy, happiness and love held at Don Bosco School Siliguri had the theme: ‘Accompanying the young with love.’

“Though we are representing different regions, speaking different languages, yet we do belong to one family, the society and the world at large,” stated the Youth Director of the Salesian Institute of Kolkata Br. Lawrence Mondal.

Br Mondol claimed, “The rally was indeed a gesture to show ordinary people, peace is the only desirable outcome which could intensify the love for humanity.”

The peace rally 2018 marched from Don Bosco School Siliguri along Don Bosco Road, crossing over to Sevoke Road at Don Bosco Moore covering a distance of some 4 km.

The peace marchers dressed in their ethnic outfits and holding placards and signing peace and harmony songs walked silently communicating the message of peace.

The colourful rally which began at 2 pm with a short introductory speech given by the Vice Principal of the host school Fr. Dilip Mondal was a crowd puller along the route.

The four-day event held from 25 to 28 January were packed with activities promoting harmonious living and cultural extravaganza celebrating ‘unity in diversity.’