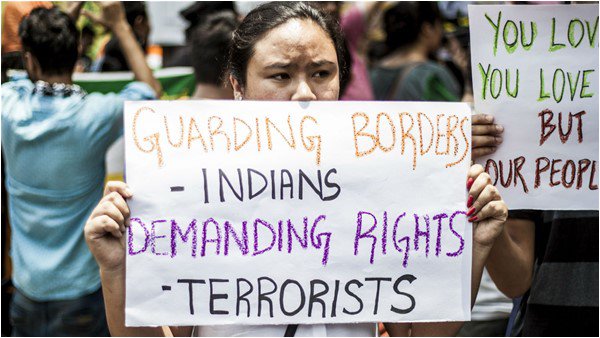 
“I never really understood why Harry Potter had a character who everyone referred to as He-Who-Must-Not-Be-Named, until recently” says Dhanraj Maams. It had been a while since the two of us had got to hang out together. The last time we met he was in heavy duty election mode.

D Maams is weird that way; he will talk to you about everything under the sun, like literally everything, and bring it down to a relatable topic, which will make things crystal clear.

Like that one time, a TV news anchor was announcing “scientists have finally created metallic hydrogen by applying almost five million atmospheres of pressure to liquid hydrogen. In its metallic state, hydrogen could act as a genuine superconductor and could revolutionize everything from energy storage to rocketry…” and he goes, “But what happens when they take away the pressure? Its unnatural for such pressure to be sustained forever, so their superconductivity cannot be mass replicated and its unsustainable… it’s like Bengal government imposing unsustainable pressure on our people, Newton’s third law postulates, every action has equal and opposite reaction, so Mamata will have to face public ire, our region will explode out in rebellion.”

That’s why, I wasn’t least surprised when he referred to Harry Potter. He may be Fifty ko, but his heart is still Fifteen kai.

“But what brought about this revelation?” asked I

“Haina, she is definitely a Slytherin” says he.

SEE ALSO:  ANYONE UP FOR HANGING - Them Syndicates of Yore
Powered by Inline Related Posts

Confused, “He-Who-Must-Not-Be-Named”, you mean? I ask

“Haina, She-Who-Must-Not-Be-Named – The loveless” says he

Ahhhh.. he was talking about Nirmaya – the Loveless. See how smoothly D Maams did it, from Lord Voldemort  to Nirmaya, a smooth transition.

“Indeed it is, I have been thinking about it for a while… and only the other day, my suspicions got confirmed, she wants pure bloods, only pure bloods to live in HER state… anyone who is not like her, who doesn’t cater to her line of thought, who is impure and unworthy of living in a pure state ruled by her” he adds.

“What confirmed it?” Asks I

“Didn’t you see? She wants everyone living in her state to speak the language she speaks... else they don’t have a right to live in her state… she is phenomenal” he adds.

“She is mad that’s what she is, and a fascist… she is today what Hitler was back in 1939s and what Voldemort was in Harry Potter… a reckless politician raking up ultra-nationalism among her people, so that she can crush all voices of dissent” countered I.

“Voices of dissent? What voices? Which dissent? By whom?” says he

Pissed off, I yell “Areyyy maams, don’t act like you don’t know… She-Who-Must-Not-Be-Named started by trying to impose her language on us…and shot dead our youths for protesting against her linguistic imperialism remember?”

“You mean, the Terrorists, who were supported by Maoists in Nepal, and were hands-in-gloves with militants in North East?” them? Us?

Perturbed I was, “yes us, she labelled us terrorists…”

“So”? says he nonchalantly

“Aren’t you pissed off?” asks I

“Why would I be…? we are not the only ones she has called terrorists… she labelled the agitating doctors terrorists and outsiders… she called a student who dared to ask her a question on rape – a Maoist, she says anyone chanting Jai Shri Ram is an RSS outsider… I am actually totally honoured to be in this August company of people, whom she sees as outsider, terrorists, Maoists… and to be honest, that’s what we – the Gorkhas are, outsiders… we don’t belong in the land of the Pure bloods… we are outsiders and so is our land… which is why we need a state of our own, where we the impure can thrive and prosper. Had Germany and Japan not been resisted and stopped, had they not been tamed by force, they would have continued to massacre millions of people… fascists all over the world from Hitler to Stalin to Mao to Mussolini to Pol Pot to Jyoti Basu to She-Who-Must-Not-Be-Named all have one thing in common, they all believe in the superiority of their race, language, literature, culture, society over everyone else’s, and we the simple hill folks definitely don’t belong in a state run by such despots and their supporters… Just like how the world got united to help the Jews establish their own country, our nation India should get together to help us build a state of our own, so that we can thrive and prosper away from these slytherin lot, who never consider others as being equal to them… our nation needs to see, we will never be treated as an equal in such a pure-blooded state… we are not from their state, and we DO NOT want to live in their state… they can keep their language, their culture or lack of it, their unoyon and their abhodrota… we simple hill folks will find ways to survive without any of it… we need to be free… free of this madness…” ranted he in one go.

There was silence for a while, and the whole shop exploded in applause… this was the second time Maams was getting a standing ovation from all of us…

Ironically, as time passed both Hitler and Voldemort eventually turned out to be HALF-BLOODS. Hitler had Jewish and African ancestors, and Voldemort who hated the half-bloods, was himself a muggle born.

If any of these desires of ours resonate with you… shout out proudly… “we are outsider… we don’t want to become your insiders… give us our state and set us free”… till it reaches She-Who-Must-Not-Be-Named.