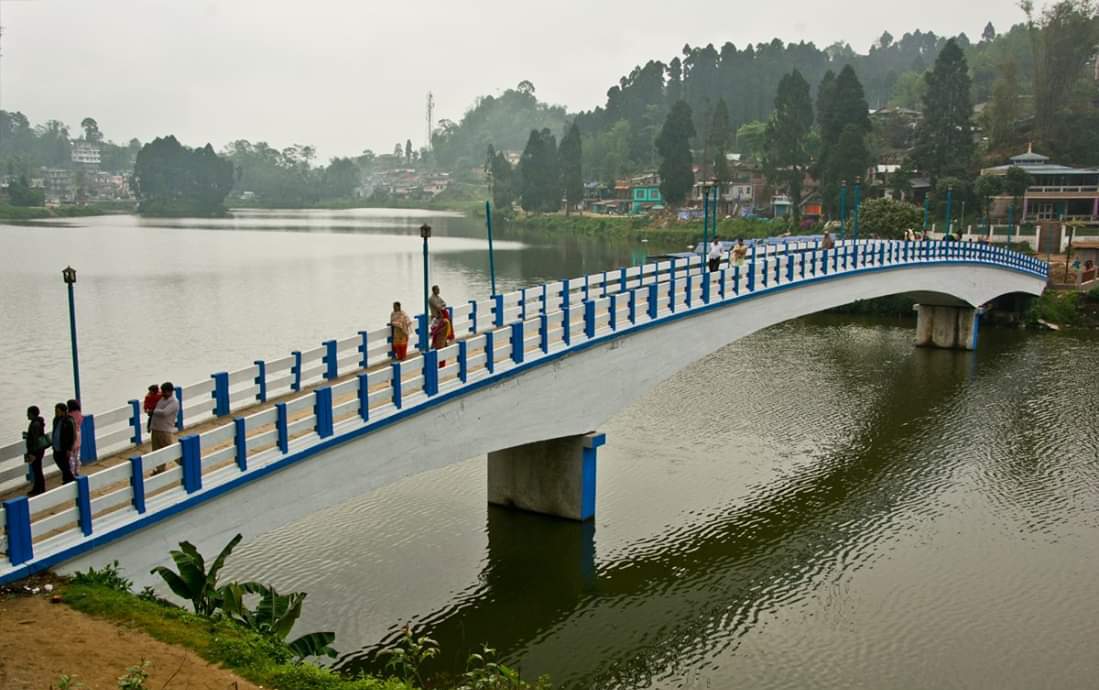 “If this is Switzerland, I would rather not live here” exclaimed a tourist.

This tourist, a friend actually, is from Kolkata and visits Darjeeling ritually every Christmas for a week, and goes back after celebrating New Year here. She is very aware of how things are politically and otherwise, both in Bengal and Darjeeling.

She has seen visuals of “London” and parts of “Europe” unfold right before her eyes. She has seen development happen. Everything developed at a break-neck pace. Buildings turned from red to white and blue, so did the bridges, culverts, even electric pole and taxis. She being a Spanish football team supporter doesn’t like Argentina much, so you can imagine her distress when the entire city, in fact the entire state of West Bengal, gradually transformed and developed into a giant Argentinean Flag replica.

Darjeeling was her only salvation. She comes here, for one week in a year, just to regale in the green and orange and pink and yellow, and of course red and all other colours she doesn’t get to see much in her part of the country anymore.

“I can’t believe development has made its way to the hills too” she says with a little hint of sadness in her voice.

“You know Mirik lake? that bridge there” she says, in a tone that  expects answers

“As in rainbow?” says she

“Huhh? I thought it was named after the rainbow shape of the bridge?” says she

“Nooo… Indreni Thapa was with the INA, along with Saheed Sabitri Thapa after whom the park next to the bridge is named, blew themselves up to stop British tanks from attacking INA troops” explains I

“Park, what park? I thought, someone was preparing the grounds to plant paddy there… there’s no park, only mud, endless mud” exclaims she.

“There used to be though” says I

“Ahhh, development, see Unoyon… it has happened there too” says she.

“Anyway, never mind, that bridge remember, the rainbow shaped one, that has also been developed, now it looks like a perfect Argentina flag” says she. I don’t know what to say, so I say nothing.

Mirik lake these days looks like a disaster zone. There is a thick layer of oil floating on the water. The fishes are barely alive. Boats that would earn money for the locals are not on the water anymore, but lying on the shore rotting. Ironically a shop has come up inside the lake, not on the shore. Switzerland Much – The boats, are learning how to walk on the land

I just shake my head, and add, “Same with almost all public infrastructures in Kurseong and Kalimpong. Kalimpong mela ground remember? Even that looks like Argentinean flag now, so does their main road.”

“Vikash, see that’s the definition of Unoyon…” says she.

As we head to Mahakal, “man, who are these people, are those the people from Switzerland?” she screeches.

“Beggars” I explain, trying to be helpful

“Righhtttt” says she, obviously irritated by my inability to comprehend her sarcasm

Before I can answer, she blurts out, “Could they be from Switzerland? Where do they come from? What are they doing here? Who brought them here? All of them have a kid each… like all of them… look at them… look… see, even that one over there… oh God her too, that little one too… see see… can you see?” She keeps on pointing out. Switzerland Much – the good people of Switzerland?

I don’t know what to say. I know she must have seen thousands of beggars in her life; she comes from Kolkata after all. But her reaction was weird to say the least, till it actually hit me, and it hit hard.

Indeed all those beggars had a kid each. How come all the beggars here are all female, with one kid each?

It almost felt like someone had put up an AD saying, “Wanted Single Mothers With One Child – for excellent begging opportunities in Darjeeling. Please note, this opportunity is just for single mothers with a single child, single mothers with double child may apply for similar begging openings in Kolkata, Delhi, Mumbai and Bangalore. Calls for Hyderabad and Chennai posts will open shortly”

“Don’t you guys have government officials or NGOs, that work for the welfare of children here?” she asks.

“We used to have, but the District Child Welfare Officer and his wife got arrested for allegedly selling off orphan children to the highest bidder, now I am not sure” says I. “We also have lots of NGOs, they do everything for them, they cut their hair, trim their nails, give them bath, clean clothes and feed them food… they do that every three months or so…” I say with pride in my voice.

“They put up pics on Facebook too.. of their doing good… see see…” I say, scrolling my phone in an attempt to show her the awesome work our hill NGOs do.

She looks at me aghast.

“You mean to say, no child welfare organization or government official or people associated with NGO have ever asked these women why their children are begging. Or who brought them here? Or where they originally came from?” wonders she

“Well, you know how it is… if you question anything these days, you are labelled as being racist, and inciting communal hatred and cases are slapped against you… so everyone keeps quiet” explains I.

SEE ALSO:  Remembering Dr. B. M. Barua -- A Distinguished Scholar of Indology - 1st Indian to Get a D.Lit From University of London
Powered by Inline Related Posts

She is livid with rage, “find me, find me the phone number of these people, give me, give me your phone… I want to call them” demands she.

Being a big city person, she has a big city rage. I find it cute, but naive.

“Don’t call, you will get me arrested” says I

“Cuz the big brother and their bigger sister listen to all all the calls in the hills, if they know, you are raising trouble and I am with you, they will come and arrest me. They don’t like trouble makers here” explain I.

I guess that hit the bull’s eyes or balls, whatever that expression is, I can’t ever remember that one proper.

Her anger ebbs. She understands how things are. I told you already, she is astute.

“If this is Switzerland, I would rather not live here” exclaims her

“Oh don’t worry, things will become better… they always do…” I try to cheer her up.

“I know, they will… but these children…” she is really concerned, I can see that

“Don’t worry, NGO people will come and feed them… and they will post pics on Facebook… you can check later and feel good” says I

“Unoyon huh… Vikash… Development… I am fed up of it and its blinding pace… I was thinking of moving here to escape all that, but seems like that epidemic has caught roots here too…” she is still angry.

I don’t say anything, as having an opinion against development is highly dangerous these days.

“I don’t know what to do next year for Christmas?” says she

“Do what you always do, come here” says I

“I can’t… my system won’t digest all this development, I guess I will move away to another country,” says she.

“Anywhere, but definitely not Argentina, or Switzerland… I have had enough for a lifetime” says she

We both finally find something to laugh about.

Switzerland Much: This is the Saheed Sabitri Thapa Park in Mirik – tara papi le dekhdaina Switzerland Much – Kalimpong has also become an Argentinean fan city Switzerland Much – Mirik Lake, come for the scenery, enjoy the oil spill Switzerland Much – Store on the water, boats are learning to walk on the shore