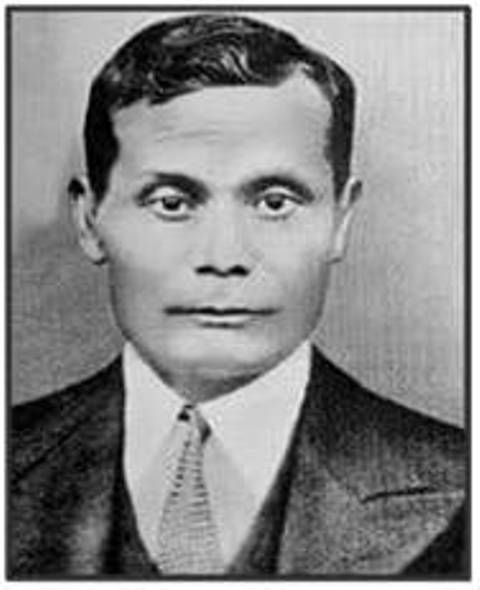 Indologist Dr. Beni Madhab Barua but more famously known as Dr. B. M. Barua was born on 31 December 1888 in Mahamuni Pahartali of Chittagong (now in Bangladesh) and died on 23 March 1948 in Kolkata.

He received his formative education up to matriculation in Chittagong where he excelled as a student. He graduated  from the Baharampur  Krishnanath College in 1911 in Pali with a first class. In 1913 he passed his M. A. in Pali with a first class first from the Calcutta University. In the year 1914, Ven. Kripasaran had recommended the name of Dr. B. M. Barua to the Government of India through Sir Ashutosh Mookerjee, the Vice Chancellor of the Calcutta University who sent him to the University of London on a state scholarship to pursue higher education after which he was awarded with the D. Litt. degree in the year 1917 thereby becoming the first Asian recipient of this degree for his thesis titled,  “Indian Philosophy — it’s origin and growth from the Vedas to the Buddha”.

The Bengal Buddhist Association was founded in the year 1892 by Ven. Kripasaran Mahasthavir to work for the revival and regeneration of Buddhism in India. He was a contemporary of the Anagarika Dharmapala of Sri Lanka who established the Maha Bodhi Society of India in 1891. Ven. Kripasaran and Anagarika Dharmapala had made representations to the Calcutta University to introduce the study of Pali to which Sir Ashutosh Mookerjee had accepted.

On his return from London he was appointed as a Lecturer in the Dept. of Pali and subsequently became the Professor and Head of the Deptt. of Pali, University of Calcutta. He was appointed the University Professor of Pali in 1925 for his outstanding merits and continued to hold this post till the time of his death in 1948. He was also attached with the Departments of Sanskrit and  Ancient Indian History & Culture where he taught.

Dr. Barua was a reputed Indologist of his time and has written extensively on Pali, History and Archaeology and other related subjects of Buddhist Studies. Some of his well-known books are Lokniti (1912),  Maniratnamala (1913),  Grihivinaya (1913),  Mahasatipatthana Suttanta (1914) which were published by the Bauddha Dharmankur Sabha.

He was associated with many organisations and institutions. He was also the General Secretary of the Bauddha Dharmankur Sabha. It was with his initiative that the three storeyed Arya Vihar was constructed with funds donated by the great industrialist Seth Jugal Kishore Birla and was inaugurated by Dr. S. Radhakrishnan in 1937. He was instrumental in setting up the Nalanda Vidyabhavana by the Sabha in 1935 to promote Pali and Buddhist Studies and was inaugurated by the reputed scholar Dr.  B. C. Law.

Due to his scholastics he was awarded the Dr.  B. C. Law Gold Medal by the Royal Asiatic Society of Bengal. The Vidyalankara Pirivena (University)  of Sri Lanka had conferred on him the title of Tipitakacariya for his work on Buddhism and Buddhist Studies in the year 1945.

He was also the Editor of Indian Culture,  Buddhist India,  Visvabani and Jagajjyoti. These were very high quality journals which received his efficient editorship. The Jagajjyoti  started in 1908 is still being published by the Bauddha Dharmankur Sabha and is widely circulated. He was a prolific writer and authored many books and wrote hundreds of articles which are not only learned but monumental works on Indological Studies.

Dr.  Barua was associated with many social organizations and societies. He always contributed financially to these institutions which provides help and relief to the poor and the needy. He was always concerned with the education of the boys and girls that they should attend schools and colleges and that their career should not hamper. He contributed towards their education by paying their fees which even his family members never knew. It was only possible to know about it when after his death the office chamber was being cleaned and out came the payment receipts of the students whom he helped. Apart from scholarship his other facet was philanthropy and charity.  The Assam Sahitya Sabha (Ahom Xahitya Sabha)  had in its meeting held on 8.1. 1925 passed a resolution recognising Dr. Beni Madhab Barua as a respected scholar and well wisher of the Assam Sahitya Sabha along with a host of scholars amongst whom was also Dr.  Suniti Kumar Chattopadhyaya.

The Bauddha Dharmankur Sabha had on 19 April 2012 installed a bust of Dr. B. M. Barua in the Dept. of Pali, University of Calcutta with the kind cooperation of Prof. Suranjan Das,  Hon’ble Vice Chancellor celebrating his 125 Birth anniversary.

In recognition of his works and his facet of philanthropy, we have initiated the Dr. B. M. Barua Scholarships to be given to the meritorious students hailing from the economically weaker sections of the society since the last many years. This is to help the students and also to remind them that they too have a responsibility towards society when they are in a position to give back what they have received especially when their education itself is so heavily subsidised in a country like India. The Scholarship Fund was started from 1996.

We have also started the Dr. B. M. Barua Memorial Lecture from the year 2011 where scholars from India and Bangladesh delivered the Memorial Lectures. This year Prof. Baidyanath Labh, Vice Chancellor of Nava Nalanda Mahavihara, Bihar will be delivering the memorial lecture.

The Bauddha Dharmankur Sabha (Bengal Buddhist Association) is privileged to be a part of this celebration and feels happy to share the life and works of Dr. Barua with the world thereby enriching the tangible and intangible cultural landscape of India. It is an opportune moment to reintroduce Dr. Barua and his works to modern scholars which will help understand his relevance.

Wishing everyone a very Happy New Year and a year full of love, peace, happiness and prosperity.

May all beings be happy.

WRITES: Bhikkhu Bodhipala is the General Secretary of Bauddha Dharmankur Sabha
(Bengal Buddhist Association) Kolkata, India and can be reached at: bodhipala.bdg@gmail.com Be the first to comment on "Remembering Dr. B. M. Barua — A Distinguished Scholar of Indology – 1st Indian to Get a D.Lit From University of London"