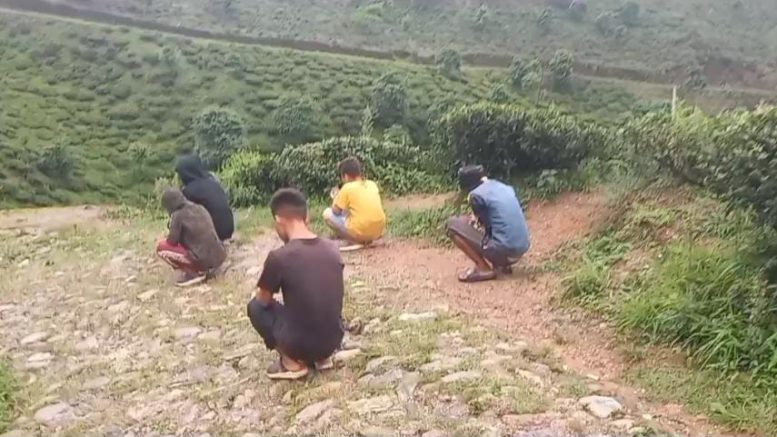 
“Online Classes” was a term added to the popular lexicon after the COVID pandemic forced schools and colleges across the country to shut down. Today almost everything is being done online – schooling, office work, meetings, and sometimes even wedding ceremonies. The digital world is a great equalizer, it provides equal opportunities for all, as long as they are connected to the network. Tragically for the majority of students from Darjeeling hills, Terai, and Dooars accessing the network itself is a battle, they keep on losing. Other than those lucky few who live in towns, or on the right side of the mountain where network signals are strong, the majority of the people from rural regions here do not have access to cellular networks.

Imagine, the plight of a child, whose parents hardly earn Rs 6000 per month working in the tea gardens buying her a smartphone so that she can attend school online, and her having to travel for miles every day just to access the cellular network to attend it. The majority of the students in North Bengal are forced to live this reality.

Frustrated about the difficulties facing their village, Anil Thapa the President of Sumripani Gram Sudhar Samitee under Darjeeling District shot off a letter to Ravi Shankar Prasad the Minister for Communications, “Lack of internet services to our kids is nothing lesser than the heinous crime barring them from the rights of having a better education. We do believe that we too are a part of “Digital India” that our beloved PM dream and aspire of… are we lesser Indians to suffer and live in this grim situation forever?” [sic] he questioned. Dipendra Dipzo Khati, Secretary of the organization says, “We are living in a dark zone, there is no network coverage for the majority of the people in Pokhrebong valley, how can our children ever hope to become competitive, they are being deprived of their right to education as enshrined in our constitution. We too pay taxes, we too are citizens of the same country so why has the government failed to provide basic internet facilities for our region?”

In Todey-Tangta, which falls in Kalimpong District, the situation is even grimmer. The majority of the residents here are reliant on farming for their subsistence. Due to the lack of internet and cellular connections of Indian companies, around 1500 students from the region here are forced to rely on whatever little internet they can access using the Bhutanese network. But income is low, so not every parent can afford to pay for access to the Bhutanese network, which costs around Rs 200 per day. Residents here have similarly written to Chief Minister Mamata Banerjee, “It’s been ages, that India acquired its independence but the present day scenario of Todey-Tangta still reflects the acrimonious circumstances which seem unconvincing for the rest of the country. It is extremely disheartening that even being a part of this country we have to rely upon our neighboring country Bhutan for modern-day facilities like telecom and internet”. [sic]

In Milikthung, which falls under the Mirik sub-division, around 1200 students are similarly suffering. A letter from the Nava Pravat Sangh, a village-level body, to the Union Minister of Communications reads, “we don’t have any means of communication i.e mobile networking at our place… our villages Kharbani, Chotakothi, Tingling, Piplaybotey, Noldara even don’t have any network. In this pandemic situation of Covid, students are having their online classes, but our students are lacking or unable to attend their online classes due to network problem.” [sic]

On March 19, 2021, Telecom Minister Ravi Shankar Prasad had informed the Parliament that “Over 1.54 lakh gram panchayats are now ready to provide high-speed broadband services under BharatNet project. We are targeting 5519-gram panchayats (GPs) to provide internet connectivity through satellite media, as on March 1, 2021, 3587 GPs have been connected.” Could it be possible that all the remaining gram panchayats that are yet to be connected are those from the Darjeeling hills, Terai, and Dooars region? Even if it’s not, the reality is, the majority of the villages in North Bengal are deprived of internet connection.

“A BSNL internet service tower in our village could help a lot. We would like to request you to initiate whatever it takes to reach out to the concerned offices to help us with better internet services in our village” is how the letter by Sumripani Gram Sudhar Samittee to Darjeeling Member of Parliament Raju Bista concludes.

BSNL which itself is in dire need of rescuing, can it come to rescue these villages and the students who continue to live in the “internet dark zone”. Will the students from North Bengal ever get a level playing field as the students from the rest of the nation?

There are many such questions, but no one willing or able to answer them.

This article was originally posted in The Statesman.