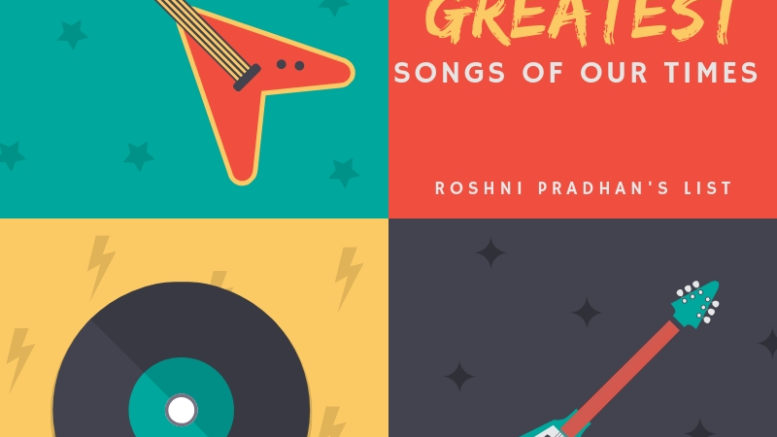 Many of these songs have been ground breaking and influential all over the world. Songs that have been written as a protest, or for human rights, songs that promote brotherhood of man and the fight for injustice. Songs that had the power to shake the world and will some continue to do so.

Here are some songs that most of us can relate to:

Ol’ Man River, a 1927 song from the musical ‘Show Boat’, was composed by Jerome Kern and lyricist Oscar Hammerstein II. It is notable for several aspects: the lyrical pentatonic-scale melody, the subjects of toil and social class, metaphor to the Mississippi, and as a bass solo. It talks about the hardships of the African Americans that contrasts with the uncaring relentless flow of the Mississippi River.

Many musicians and musical groups have covered the song since the 1920s, but the version by Paul Robeson has become a pop standard. The numerous versions include ones by Frank Sinatra, Harry James, Sam Cooke, Sammy Davis, Jr., Al Jolson, Cilla Black, Django Reinhardt, Ray Charles, The Beach Boys and Aretha Franklin.

Though considered slightly racist in its original form, the words have been altered to suit the times prevalent during the performance.

The reason I have mentioned it here is because of the Indian connection — Dr. Bhupen Hazarika. Known as the ‘Bard of India’, Dr. Hazarika (or Bhupen da as he is lovingly called) has recently been awarded with Bharat Ratna in 2019.

In 1949, he was in New York on a scholarship for a PhD program. Here he befriended Paul Robeson, who also happened to be a prominent civil rights activist. It was Paul who influenced him in his song Bistirno Parore based on the theme of Robeson’s Ol’ Man River.

Though the original song was in Assamese, Bhupen da later translated & sang it in Bengali and Hindi as well. The Hindi version was used in the Movie Gangajaal (2003).

In 2017, this song was translated in Nepali by the students of Jadavpur as a protest to showcase the hardship, struggle and suffering faced by the Gorkhas in Darjeeling.

Originally a gospel, this song became associated with the Civil Rights Movement after being introduced by Guy Carawan in 1959. It became the movement’s unofficial anthem as it was performed at rallies, folk festivals and concerts by the likes of Peter Seeger and Joan Baez.

The song is most commonly attributed as being lyrically descended from “I’ll Overcome Some Day”, a hymn by Rev.Charles Albert Tindley that was first published in 1900. The modern version was published in 1947 under the title “We Will Overcome” in an edition of the People’s Songs Bulletin.

Since its rise to prominence the song (and it’s different versions in different languages) have been used in a variety of protests worldwide, a song to express unity in a good cause. In 1963 Joan Baez led a crowd of 300,000 protestors at the Lincoln Memorial with this song and in 1968 Rev. Martin Luther King Jr. quoted the lyrics in his last sermon before he was assassinated.

At just 21 years of age, the folksinger-songwriter released his second album, The Freewheelin’ that featured the classic ‘Blowin’ in the Wind’. It came out a year before the passage of the Civil Rights Act. His voice signalled the coming of a new generation, one ready to confront the injustices of the time and unwilling to settle for war or indifference.

This classic has been translated into at least a dozen languages, featured in countless movies and played live over 1,200 times by Dylan alone.

His other song ‘The times they are a changin’ was recorded in 1964 for the album of the same name and reflects Dylan’s own worldview as a folk activist fighting for justice for the people of the world.

In October 2017, the world sat up and acknowledged his contribution to the society as Bob Dylan became the first songwriter to win the prestigious Nobel Prize for literature. He received the prize “for having created new poetic expressions within the great American song tradition”, the award citation said.

Lennon’s most well-known song about peace & brotherhood is considered one of the greatest song ever written. He famously said that the track is “anti-religious, anti-nationalistic, anti-conventional, anti-capitalistic…but because it’s sugar-coated, it is accepted.”

This classic continues to inspire a vision for a better world for people around the globe.

You may say I’m a dreamer — these must be the most famous lines ever written and copied.

After witnessing harsh lives of Haitians in the seventies, Bob Marley was inspired to write this song with fellow Wailers member Peter Tosh. Originally recorded by the Wailers, Marley’s re-recorded solo version is the one that has stood the test of time and is one of his most enduring numbers.

Who would have thought that this reggae hit would go on to endure as an international human rights anthem?

The Irish rock musician Bob Geldof of the Boomtown co-wrote this song with Midge Ure of the band Ultravox, in aid of Ethiopia. Geldof recruited more than 30 British pop stars (including members of U2, Culture Club, and Duran Duran) to participate in the making of this song. It took a month for the song to be recorded & released just in time for Christmas. In just a month, the song (credited to “Band Aid”) raised over $3 million. ‘Do They Know It’s Christmas?’ depicts the stark contrast between the ‘first world’ and the ‘third world’. It also inspired the ‘We are the World’ song by USA for Africa.

Inspired by the harmonious path blazed by Band Aid’s “Do They Know It’s Christmas?” Harry Belafonte thought of organizing an All American charity concert for Ethiopia. his manager, Ken Kragen, believed a charity record would generate more money. Kragen enlisted Lionel Richie and Michael Jackson to write the song. Quincy Jones (who was instrumental in bringing the project to life), Stevie Wonder, Bruce Springsteen, Ray Charles, Bob Dylan, Tina Turner, and 40 other stars participated in the recording session. Columbia Records distributed the record for free. Recorded by the United Support of Africa (USA), it was released on March 7th and became the #1 song in the United States and England within two weeks. It ultimately sold over 10 million copies and raised $50 million for famine relief.

Following the devastation caused by the magnitude 7.0 M earthquake in Haiti on January 12, 2010, a remake of the song by another all-star cast of singers was recorded on February 1, 2010. It was named ‘We are the World 25 for Haiti’.

In a 2001 Internet chat with fans, Jackson said that “Heal the World” is the song he was most proud to have created. The video eschewed his own superstar visage for footage of orphans in war-torn Burundi. He eventually created “heal the World’ charitable organization, through which he strove to put the lyrics’ altruistic message into practice. Founded in the wake of the song’s release in 1992 with the aim ‘to improve the conditions for children throughout the world,’ the Heal the World Foundation drew millions from Jackson’s Dangerous tour proceeds and Super Bowl XXVII half time show performance fees — plus smaller donations from fans.

“I Want to Break Free” was a song about emancipation, breaking out of the box society tends to hold people in. Queen further highlighted that point with a music video that featured band members dressed in women’s clothes. The song has been used by many as an anthem against oppression and will continue to be for years to come.

In 1992, the American rock group 4 released a song ‘What’s Up?’. It went on to be a chart topper and has since become a queer anthem since all its members were Lesbians.

The song appeared on their first album Bigger, Better, Faster, More! And even though most people refer to the song as ‘What’s Going On?” the band deliberately titled it ‘What’s Up?’ to avoid being confused with Marvin Gaye’s 1971 song ‘What’s Going On.’

Youssou N’Dour collaborated with Neneh Cherry and her husbandCameron McVey to write this chartbuster that was performed at Human Rights concerts with support from Peter Gabriel.

This is an anti-rascist song that refers to the first moments of a child’s life.

‘7 Seconds’ is about the first positive 7 seconds in the life of a child just born not knowing about the problems and violence in our world…..That tune grew on its own, completely out of proportion. It was out there doing its own thing. But that is a dream when you write a song.”– Neneh Cherry’
Three different languages were used in this song: English, French and Wolof, which is a language spoken in Senegal, Gambia, and Mauritania

Though the list is too long but here are some songs that have been influential.

I hope that we shall keep hearing music that speaks for the masses in the future too.