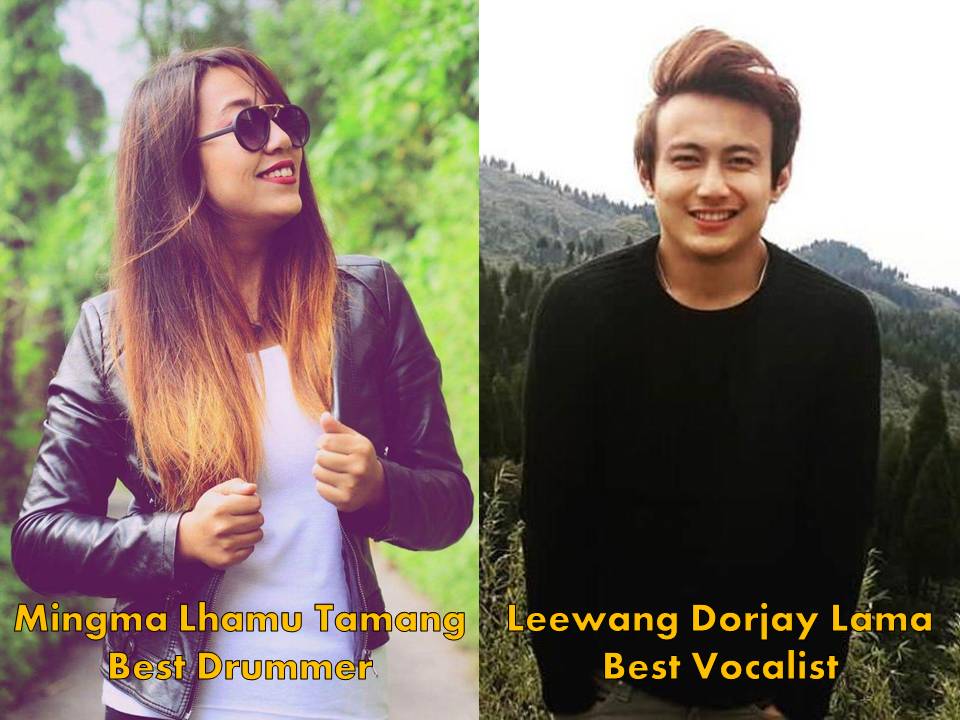 Living up to the reputation of their predecessors and that of our region as being the “heart of western music” in India, two Darjeeling rockers enthralled the audience at the recently concluded Hornbill International Rock Contest (HIRC) 2018.

While Leewang Dorjee of Meraki (Darjeeling) was declared the ‘Best Vocalist’, the drum-roll for ‘Best Drummer’ went to Mingma Lhamu Tamang from Vishnu.

Coincidentally both of them had recently performed together in Darjeeling.

Showing that women rockers in India have arrived, two female rockers walked home away with the top individual prizes while the champions had two powerful female performers. In the individual category, Nash Longkumer (UDX) collected the ‘Best Guitarist’ title while Shalini Mohan playing for ‘Perfect Strangers’ took home the ‘Best Bassist’ honour.
Lewang Dorjee of Meraki (Darjeeling) was declared the ‘Best Vocalist’. We had featured his latest song Runaway on our platform recently.

You can watch it here

The individual category carries a cash prize of Rs 25000 along with other music accessories. The finale had two bands from Jharkhand and Nagaland, and one band each from Delhi, Darjeeling, Sikkim and Bangalore, and Assam. Lewang Dorjee of Meraki (Darjeeling) was declared the ‘Best Vocalist’ The judges for the HIRC 2018 were Derek Julien, Derek Julien, iconic guitarist of Waterfront, one of India’s greatest rock bands; Among Jamir, who plays for Bollywood music director Pritam and himself a contender on the first Hornbill National Rock Contest; and Sonam Sherpa, lead guitarist of renowned band Parikrama since 1991.
A total of 24 bands, including five from Nagaland, competed at the HIRC. The other contesting bands were from Karnataka, Delhi, West Bengal, Maharashtra, Jharkhand, Assam, Sikkim, Darjeeling, Mizoram and Meghalaya.
Nine finalist Moongphali (Delhi); Vikrit (Ranchi, Jharkhand), UDX (Dimapur, Nagaland), Vishnu (West Bengal), Her Illegal Practice (Sikkim), Highway 69 (Ranchi, Jharkhand) Perfect Strangers (Bangalore) Since 90’s (Dimapur, Nagaland), and Ambush (Diphu, Assam) competed for the coveted title.
Arguably the biggest domestic rock fest and indisputably the highest prize money rock contest in India, the HIRC has become a big draw since its introduction in 2006 as Hornbill National Rock Contest. [TheDC News Desk, We are most grateful to Mr. Aashwin Pradhan for providing us the video footage and pics of Leewang posted here]

71 Year After Independence – People Forced to Carry Their Sick and Infirm at Night in Hope Gaon, Dhajey, Darjeeling