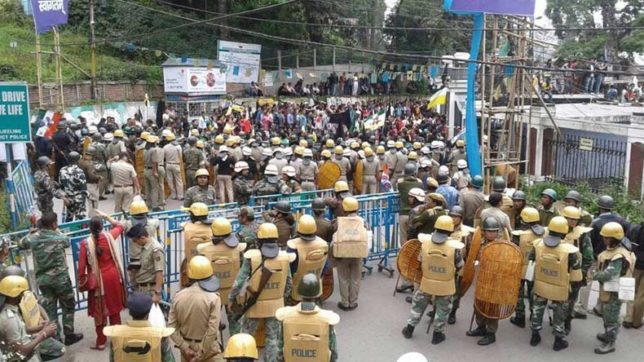 It almost feels surreal that, this day last year 8th of June 2017, Darjeeling hills, which was heading towards second term of Gorkhaland Territorial Administration elections erupted in protests, flames, and tear gas shells.

A lot has changed since that fateful day. Here is how things unfolded.

MAY 15th – The Announcement

In a conveniently timed announcement, following the end of Municipal elections in the hills, on May 15th, 2017 Bengal’s Education Minister Partha Chatterjee had declared the implementation of a three language policy, making Bengali compulsory in all schools across the state. On May 16th, 2017, WB Chief Minister Mamata Banerjee had reiterated the said policy, and said, “Students have the freedom to take any language of their choice as a first language, second or third language. If the student chooses Bengali, Hindi, English, Urdu, Gurmukhi, Nepali, Alchiki as the first language, he/she may opt for two other languages of their choice. One of the three languages has to be Bengali.”

This obviously caused protests across the hills, and situation went from bad to worse when the Darjeeling police filed a suo motto case under sections 120B, 153A (b), 505 and 34 against literary figures and heads of educational institutions and GJM leaders who had attended a meeting on May 30th, 2017 to discuss the government’s decision to make Bengali compulsory in schools. Other than GJM leaders Bimal Gurung, Binay Tamang and Roshan Giri, cases were drawn up against Jiwan Namdung and Prem Pradhan, former presidents of the Nepali Sahitya Akademi, Rev. Joy Halder, the rector of St Paul’s School, Fr. Peter Lingdamu, principal of St. Robert’s Higher Secondary school, Shri. Derrick Pradhan Vidya Vikash Academy, Shri. Prabhat Mukhia, Professor St. Joseph’s College, Shri. Pemba Bomzan, president of Gorkha Dukha Niwarak Sammellan among others on May 31, 2017. This caused public emotions to soar, as majority in the hills felt that filing of FIR against attending a public meeting to discuss a proposed government policy, was against the spirit of democracy and the fundamental right to freedom to speech and expression enshrined in our constitution.

The same day police was filing a suo motto case against school heads in Darjeeling, Bengal CM Mamata Banerjee was meeting school heads in Kolkata. Therein she declared that CBSE and ICSE schools in Bengal will have to teach Bengali as one of three languages up to Class X but students do not have to write the board exam in the third language, “teach the language (Bengali) in schools but don’t hold a test in the board exams. Then it’s fine,” Mamata had said in response to a question from a school principal.

However, in that same meeting, she had later reasserted in Darjeeling context that Bengali will have to be taught, she had said “Let the students of Darjeeling study Nepali, let the students of Terai study Hindi. Let them study in accordance with their capability. If I can speak Nepali, what is the harm if a Nepali speaks Hindi or Bengali? They also have different languages. Each community has its own language. I respect all the languages. I fail to understand what the problem is. You teach them Hindi, English. But then teach Bengali as the third language as well. Can’t you teach Bengali as the optional language? Can’t you teach Bengali as the third language? You study your language according to your preference, but Bengali has to be studied up to Class X.” This railed up people even more.

On June 5th, amidst protests lead by GJM leader Binay Tamang, Mamata had arrived in Mirik, and announced that all of the issues and concerns raised by politicians in Darjeeling regarding the language issue were “lies and fabrications.” The newly formed TMC controlled Municipality in Mirik had managed to get a substantial crowd to attend her meeting, and they all cheered at this announcement. GJM in-turn demanded a written assurance that Bengali won’t be imposed on the Gorkhas. The government contended that since the official order had not been given, there was no need to issue a written assurance.

That same day, Mamata announced that the Government of West Bengal would hold a Cabinet Meeting at Raj Bhawan in Darjeeling on the 8th of June, 2017. Such a meeting had not been held in the past 44 years.

In an atmosphere which was already volatile, this announcement was akin to adding fuel to the fire.

Mamata had arrived in Darjeeling late on June 7th and she had faced protests from the GJM cadres who had assembled outside Gorkha Rangmanch Bhawan. The situation was very tense.

On the 8th of June, 2017 hundreds of GJM cadres were already on their way to Darjeeling to attend a rally against Mamata’s proposed three language policy. Even though Mamata had announced the day before in Mirik that it was a lie, GJM was not willing to let go of the issue so easily.

Fearing widespread protests, the administration started to stop vehicles plying from Lebong region to enter Darjeeling. Many of these vehicles carried school student who were writing their half-yearly exams. Due to the traffic jam and cops preventing vehicles to head towards Darjeeling town, these students had to forge their exams and return back home. Once the word of this high-handedness on the part of administration spread, thousands of parents and commoners unaffiliated to any political party also joined in the protest march. Crowd of hundreds quickly soared up to thousands.

As the cabinet meeting was being held at Raj Bhawan, thousands of protestors had started to make their way to the Richmond Hills. Police decided to hold them near Gorkha Bhawan, and thus started the confrontation.

Protestors would later accuse police of throwing bricks at them, and the police would accuse the protestors of unleashing violence.

Hundreds were injured in the confrontation, several government vehicles were burned down. As tensions ran high, Mamata deployed the army in the streets and GJM in turn announced strike on the 9th of June as a protest.

What happened after that and how things unfolded, will have to be written in the coming days, but suffice it to say, on a hindsight it seems very plausible that, perhaps the West Bengal government had anticipated all the unfolding events, and even shaped them. The announcement of the three language policy was a bait, and Gorkha leadership fell for it – hook, line, and sinker.

Much has changed in the past one year, yet much remains the same.

What has, however, remain unchanged, is the will of our people to not give in, and the sad everyday reality – the discrimination, oppression, and suffering that people in Darjeeling, Terai and Dooars have to bear. In fact, the lives of common people are today no better, if not worse, than what it was a year ago. Uncertainty looms large over the fate of our land and its people, and despite numerous attempts at making the ‘hills smile’ – there is a collective frown, from which we are yet to recover.

But recover we shall.

Though a separate state of Gorkhaland seems like a distant dream at present, but like the Caretaker GTA Chairman Binay Tamang had recently said, “even though the fire has been doused, things are smoldering beneath the surface.”

To have a state of our own, is a dream that has been passed down from our forefathers, and a duty we owe towards our children and future generations, and this I believe, is what will cause people to raise up time and again.

As Gandhiji had once said, “When I despair, I remember that all through history the way of truth and love have always won. There have been tyrants and murderers, and for a time, they can seem invincible, but in the end, they always fall. Think of it — ALWAYS.”