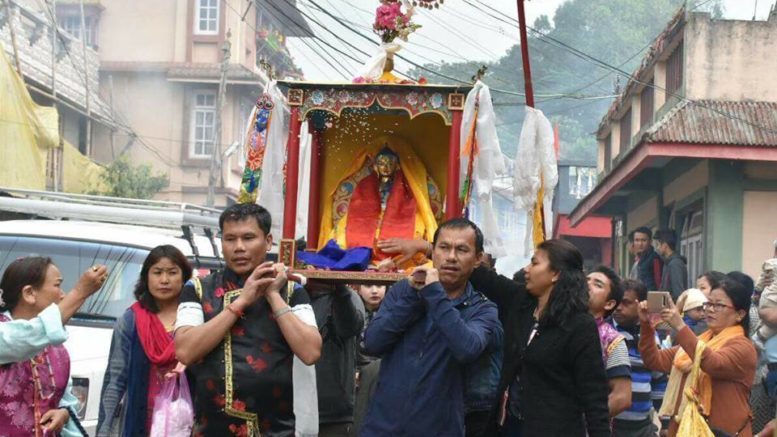 
Buddha Jayanti or Vesak is the most important of festivals of the Buddhists all over the world. It is celebrated on the Full Moon Day of May (Vaisakh) and is celebrated as the thrice blessed day as all the important events in the life of Lord Buddha — His birth in Lumbini, His attainment of Enlightenment in Buddhagaya and entering into Mahaparinirvana in Kusinagar took place on this eventful day.

The General Assembly of the United Nations (UNO), by its resolution 54/115 of 1999 recognized internationally the Day of Vesak to acknowledge the contribution that Buddhism, one of the oldest religions in the world, has made for over two and a half millennia and continues to make to the spirituality of humanity. This day is commemorated annually at the UN Headquarters and other UN offices, in consultation with the relevant UN offices and with permanent missions, which also wish to be consulted.

The exact date of Vesak varies according to the lunar calendars used in different traditions. In the countries that follow the Theravada tradition following the Buddhist calendar, it falls on the full moon day of vaisakh or May which typically falls o the 5th or 6th lunar month. The date varies from year to year in the western Gregorian calendar but falls in April or May. In China it is the 4th month of the Chinese lunar calendar coinciding with the first full moon of that month. The word Vesak itself is the Sinhalese language word for the Pali variation Vesakha. Vesak is also known as Buddha Jayanti or Buddha Purnima in India, Bangladesh and Nepal, Hanamatsuri in Japan, Seokka Tanshin-il in Korea, Fo Dan in Mandarin or Fat Daahn in Cantonese in Chinese speaking areas, Phat Dan in Vietnamese, Saga Dawa (sa ga zla ba) in Tibetan, Vesak Bochea in Cambodia, Visakha Bucha or Visakha Puja in Thailand, Waisak in Indonesia, Vesak or Wesak in Sri Lanka, Hari Wesak in Malaysia, Voxakha Bouxa in Laos and Kasone la Pyae in Myanmar.

On this occasion in many Viharas a small image of the baby Buddha is displayed in front of the altar in a small basin filled with water and decorated with flowers, allowing devotees to pour water over the statue, depicting a symbolic event when the devas and spirits made heavenly offerings to him.

This is a day of great religious and spiritual significance for the followers and practitioners of Buddha and His teachings as on this day they go to the Viharas/Temples/Monasteries and take part in the prayers and meditation and listen to discourses. They observe sila (moral vows) and practice meditation (samadhi), make offerings (dana) to the Bhikkhu Sangha. People decorate the Viharas and their homes which gives a festive look on the occasion. Buddhists distribute food, medicines, fruits, milk, biscuits, breads and nourishments to the patients in the hospitals, orphanages, old age homes and juvenile homes. They make special effort to bring smile and happiness to the unfortunate, the old and the infirm and the sick and the needy. Monks recite/chant the sutta/sutras uttered by the Buddha himself 2600 years ago to invoke peace and happiness, love and compassion, unity and brotherhood, well being and prosperity for the individual, society, country and government. Buddhists are reminded of their role and responsibility to live in harmony with people of other faiths and to respect the beliefs of other people as the Buddha had Himself taught.

SEE ALSO:  Dear Sikkim – We Are Indebted To You
Powered by Inline Related Posts

Buddhism is a tradition that focuses on personal spiritual development. It is a way of life to be practiced based on Sila — the observance and practice of moral vows, Samadhi — the practice of meditation for mental purification and Prajna — wisdom gained through experiential wisdom. Through the development of these one can gain insight and access to the four Brahmaviharas or sublime states which are metta — loving kindness, karuna — compassion, mudita — sympathetic joy andupekkha — equanimity.

The Buddha in His long ministry of 45 years advocated the importance of unity, brotherhood, non-violence and peace and His teachings or Buddhism as we know it, is not a weapon to create anarchy and annihilation but is a way of life to be lived by practising the cherished Buddhist precepts of pancasila, to enlighten oneself through oneself to achieve Bodhi and open up the hearts for peace and piety of life. His message has been a message of love and compassion for all human beings that are born and yet to be born just as a mother loves her only child. The Buddha never differentiated among race, caste, religion or ethnic groups rather he emphasised on peace and harmony among all the people of the universe. The message of His Enlightenment is a message of hope, goodwill, unity, brotherhood, compassion, love, togetherness and purity of thought.

Although we all know that the Buddha’s first sermon was of the Four Noble Truths that of Suffering (Dukkha), Cause of Suffering (Samudaya), the end of suffering (Nirodha) and the Way to eradicate Suffering (Magga). And the way to eradicate this Suffering was through the practice of the Noble Eightfold Path of – Right Speech, Right Action, Right Livelihood, Right Effort, Right Mindfulness, Right Concentration, Right Understanding and Right Thought and this is sub-divided into three parts of Sila, Samadhi and Prajna. And when a practitioner diligently practices these one can reach a stage of perfection where they are free from craving (lobha), attachment (raga) and hatred (dosa). Reaching this stage of perfection is also called as Brahmavihara or Abode of Peace and tranquillity.

The last words of the Buddha was “Appamadena Sampadetha, Vaya Dhamma Sankhara – practice mindfulness, everything is impermanent”. In one word we can say that Brahmavihara or the sublime abodes is the message of Vesak.

Vesak denotes peace, harmony and goodwill and the day should be marked to resolve all differentiations, all conflicts whether they are religious, social, ethnic, racial or domestic as the Buddha’s teachings reflect on all people to live together in peace, harmony, piety and tranquillity. Today on this occasion of Buddha Jayanti or Vesak let us try to dispel all sorts of negativities and hatred, ill-will and anger and instill in us metta, karuna, mudita and upekkha so that we can create a world where we can all share our love and compassion, unity and brotherhood, equanimity and togetherness with all — high or low, big or small, rich or poor.

The Buddha’s message to all mankind was not to harbour evil thoughts, to do good and to purify the mind and by doing this, one could develop ones own mental growth by respecting each other, by embracing the good of the others, by helping and cherishing the earth that has given us this opportunity to enjoy its nature and above all by radiating boundless love towards all those who are born and yet to be born just like the mother who loves her only only child. This is the message of Vesak – Buddha Jayanti.

The 21st century is posing us a great challenge to work for peace. There is mayhem all around. Intolerance and impatience is hurting and damaging us. Killings in all forms have increased manifold. Impatience and non-rationality is raising its ugly head at a much faster pace. Regionalism and Nationalism have become the buzz words today threatening us with the very idea of globalisation. Cold blooded murders in the name of religion has to stop at all costs. No religion asks us to kill one another to prove its hegemony. Yet people are blindfolded with ignorance and following the nerds of hatred like herds of wilder beast. We need to sensitize people to respect people of all gender and especially the women folk. Man – animal conflict will also have to be arrested which is also rising at a more speedier pace. We need to care for the environment.

On this occasion of the Vesak let us rededicate ourselves to reverberate the earth with the message of the Master that of love and compassion, unity and brotherhood so that we can all live with each other in harmony and peace and togetherness. The onus in on us to choose to live and let live or destruct and perish.

The Buddha says “love and compassion has no way, it is the only way.”

Wishing all a very Happy Vesak or Buddha Jayanti. May we all be well, happy, peaceful and prosperous.

Bhikkhu Bodhipala is a buddhist monk and can be reached at: bodhipala.bdg@gmail.com