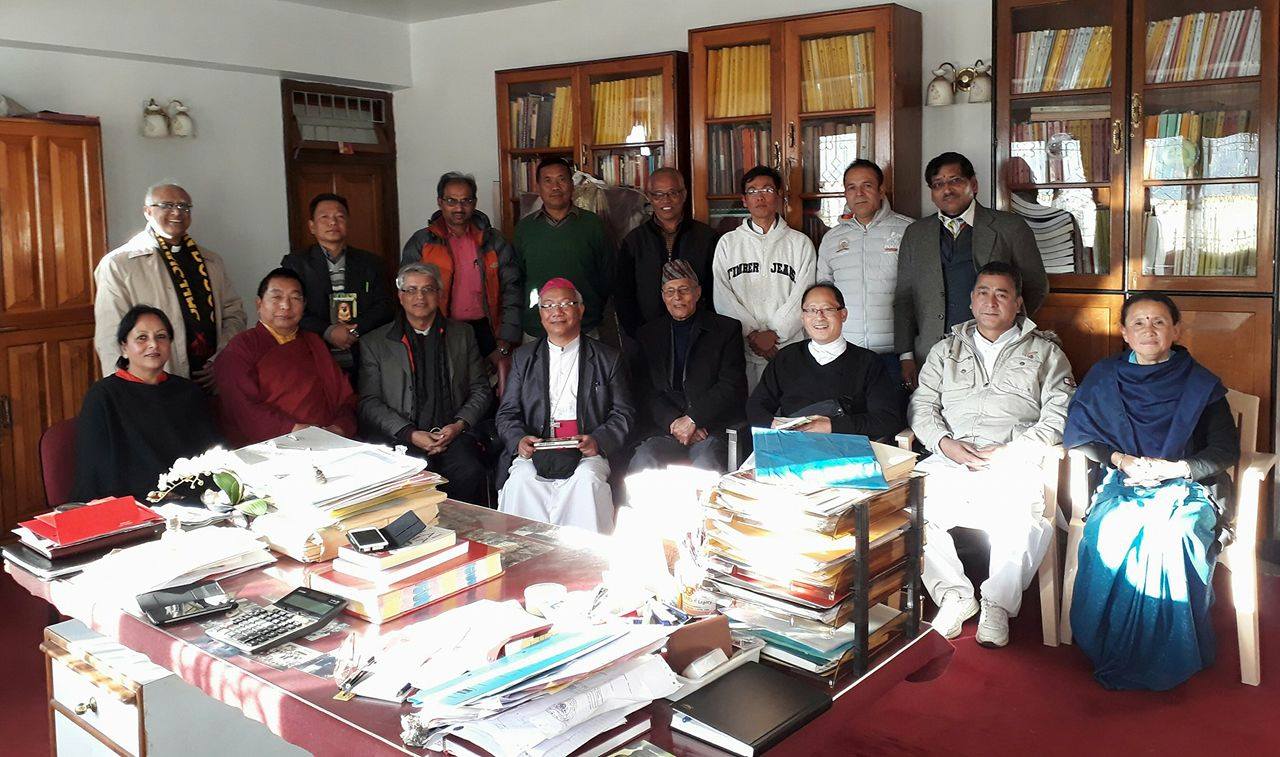 Darjeeling – At a meeting held at Buddhist Dali Monastery in Darjeeling, 3 December, heads of five religious affiliates and two NGOs agreed to meet with their delegations for a fellowship, on Sunday 17 December 2017. Some 120 leaders and teachers from various religious groups are expected to participate at the meeting scheduled to be held at Dharma Chakra Hall in the second floor of City Plaza Darjeeling. Director of Dali Monastery Senior Buddhist monk M.T. Gyatso hosted the meeting at Dali Monastery attended by 16 members including Bishop Stephen Lepcha of Darjeeling and Principal of Salesian College Dr George Thadathil who is also Secretary of the Inter faith Commission of Darjeeling diocese.

The religious faiths present at the meeting included Christians, Buddhists, Muslims, Sai Bhakts, Brahma Kumars, and NGOs Manav Uthan Sewa Samity and MARG. Recalling the words of His Holiness Dalai Lama when some one asked him which is the best religion Bishop Lepcha said, “The religion which takes one to God. At the same time one which makes a person a better human being.” In October 1986, Pope John Paul II held the “World Day of Prayer for Peace at Assisi”, the first time such an event had occurred. Major religious leaders, including the Dalai Lama and the Archbishop of Canterbury, joined with the Pope to call for peace, unity, and inter religious understanding.

Bishop Lepcha giving the background of the Darjeeling meeting encouraged all saying, “Let’s keep spreading the message of Peace and living the spirit of Assisi.” Monk Gyatso insisted on avoiding the obstacle of our ego in our efforts toward inter religious harmony. He warned the group “ego can come in the way of building peace and harmony, just like bad politicians – same thing could happen to religious leaders.” Gyatso reminded all, “We are traveling in he same boat in the same river which has currents and turbulences even though everyone hopes to reach the same destination safely.”

Salesian College Sonada senior faculty and Member of Minority Forum Sonada Dr Terence Mukhia recalled how a small town like Sonada has 14 denominational Churches and the need for harmony. Dr Mukhia underlined the special inter-faith situation in the hills saying, “Darjeeling has all types of religious followers in the same household.” Head priest of Cathedral parish Dr Samuel Lepcha complimented saying, “Our identity is in our differences.”

Built in 1971, the Dali Monastery also known as Druk Sangag Choling Monastery is located 5 km away from Darjeeling Town. The Dali Monastery which belongs to the Kargyupa sect is now the head quarters and residence of Drukchen Rimpoche the XII, who is the supreme head of the Kargyupa sect of Buddhists. The gompa is also known for the visit of the current Dalai Lama, Tenzin Gyatso, who came to Darjeeling in 1993 to spread Buddha’s teachings in the region.

Be the first to comment on "Darjeeling plans interfaith harmony meet"