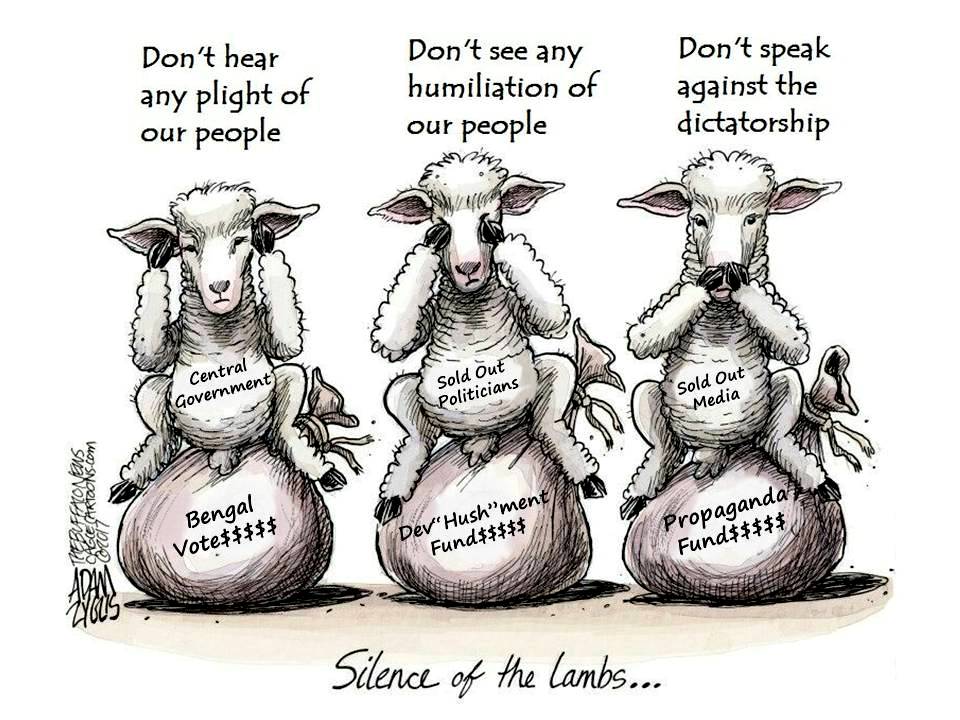 Of late, a very scary trend has started in our Darjeeling hills, notices are being issued to those Gorkhaland supporters who have gone underground or missing, asking for them to show up at various designated Government offices with ‘relevant documents by a certain date’, barring which their names will be removed from the voters list.’ In a democratic nation like India, where Majority will always thrive, this is a very scary scenario unfolding for the minorities, and especially for micro-minority communities like the Gorkhas, it could translate to the end of any and all forms of resistance and rebellion against the powers that be.

Legally and technically, the district administration is entitled to seek revision of voters list, and as per rule if a person doesn’t live at a local address for over 6 months, her/his name can be removed. The most famous such case was the removal of former Prime Minister Atal Bihari Vajpayee’s name from the Lucknow Municipal electoral list in September of 2017. However, Mr. Vajpayee had been residing in Delhi for long, and the removal of his name didn’t really affect his fundamental right as a citizen of our great nation.

However, in Darjeeling region, the district administration is using this rule to target those Gorkhaland supporters against whom various cases have been filed, and who have gone or remained underground, for fear of injustice looms large.

In such a situation, the people who are missing, cannot and in all likelihood will not, file for their names to be transferred to other jurisdiction to register as voters. Removal of any name from an electoral roll means such individuals cannot exercise their basic duty as a citizen of our nation – to elect the government of its choice. In a country like India, where criminals of all hues and colours thrive, it is rare for the state government to pursue individuals in a manner which deprives them of their citizenship rights. Case in point, Vijay Mallya still features in the electoral list in Bangalore, and Sanjay Dutta – a convicted terrorist supporter/helper also features in the voter list of Mumbai.

What is worrisome in this exercise the district administration has embarked upon, is that, it cruelly curtails our ‘right to protest’ against a powerful government. The government, in such a case may slap severe charges (actual and fabricated) against any individual forcing him or her to go underground, and then the government may proceed to struck off the name from the electoral roll, thus barring that individual from becoming a part of the democratic process of our nation – they won’t get to vote or contest in elections. Which translates to the government, if it so desires, being able to slap cases against its political opponents, cause them to run and then remove their names from the electoral roll, thereby emptying the political field.

Moreover, the government may, if it so decides, start this process of review for everyone from the micro-minority community who have lived outside their home constituency for over 6 months. Imagine, if such a scenario were to play out, almost everyone who were yelling ‘Gorkhaland’ at Jantar-Mantar or writing and shouting for/against it from anywhere outside Darjeeling region, may actually not retain their voting rights in Darjeeling, if the government of West Bengal decides to take a more draconian stance.

What is really worrisome, in all this is the silence of ALL THE GORKHA POLITICIANS. May be, many are secretly rejoicing at the prospect of having the names of their most detested opponents removed from the voting list, but what they seem to fail to realize is that someday, this same tool of oppression can be and will be used against them. As the Nepali adage goes, ” ऊसलाई  खाने बाघले तिमिलाई पनि खान्छ है  – one cannot ride a tiger forever, the tiger will eventually get hungry and run out of other animals to devour.” Their silence speaks volumes about how strongly they feel about the welfare of our community.

In comparison when BJP threatened to kick out illegal Bangladeshi refugees from Assam, the Chief Minister of West Bengal Mamata Banerjee went on record to challenge the BJP and threatened them with dire consequences if even a single Bangladeshi was touched – forget Indians, she fought for the rights of Bangladeshis, and here in our hills, the Gorkha politicians who are busy serving under her, are instead defending cops who allegedly threatened one of our Gorkha mother and a sister with rape.

Perhaps such is the curse of being born a Gorkha, we seem to be loyal to everyone else, but our own people.

The politics of Vendetta which had consumed a generation of our people, has today infested our community again. When Subash Ghising was removed from the hills GJM had rejoiced, today when Bimal Gurung is removed and hounded similarly, GNLF is rejoicing, so is AT-BT group of GJM. While CPRM, ABGL and JAP have maintained a seemingly dignified silence, their silence too speaks out loud about how they feel about the whole issue. In the race to play the politics of vendetta, the Gorkhas are losing big time. Today we have become so fragmented that we cannot even dare to speak against this hounding out of Gorkhas from our own lands.

It has begun with the missing GJM leaders, but I am certain, this is just the beginning. The Bengal government will use this on everyone of us, who dare to raise our voice for the welfare of our community and people. From asking for “Family tree since 1950” to those who went to seek residential certificate the Bengal government has made it abundantly clear that they view all of us with suspicion. If we are not careful today, a day may come when the Gorkhas will be rendered homeless. Much like what happened in the rest of North East could end up happening here, and we may end up being rendered homeless in our own lands.

So, please speak out against what’s happening in Darjeeling today. Because if we let this trend continue, soon a day may come, when you may want to speak out, but your tongues may have been cut without you even realizing it.

Remember, “if you are afraid to speak out against tyranny, you are already a slave”