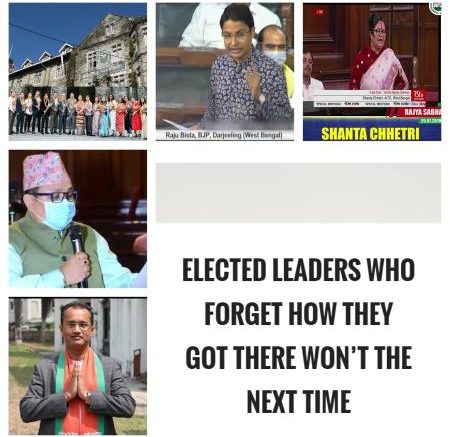 
As a relief from the daily dosage of ‘Breaking News’ about Darjeeling leaders touring the Hills and ‘interacting’ with locals, people changing parties again, and experts giving their opinion on everything, the last week has perhaps been one of the most productive week in politic. Here, we revisit some of these events:

15, March, 2022: Darjeeling Lok Sabha MP, Raju Bista raised the demand for three ropeway projects in Darjeeling Hills under the newly announced ‘Parvatmala’ Scheme of the Central Government. The Central Government in its Union Budget 2022-23 has announced a National Ropeways Development Programme Scheme to be taken up under PPP model for ecologically sustainable alternative in place of conventional roads in difficult hilly areas.

In his demand, Bista raised ropeway projects in the following locations:

15, March, 2022: Rajya Sabha MP, Ms. Shanta Chhetri raised the ST issue for 11 left-out Gorkha communities and stated that West Bengal had already approved in 2014 and requested the House to seek an explanation from the Central government for the unreasonable delay in granting the ST status.

11 March, 2022: In the ongoing West Bengall Assembly, Kurseong MLA Bishnu Prasad Sharma in his question to the Labour Minister regarding land rights for the workers.

Cyber Crime in Darjeeling – Told to File GD in Siliguri

1 Comment on "Darjeeling Politics & Issues – The week that was"