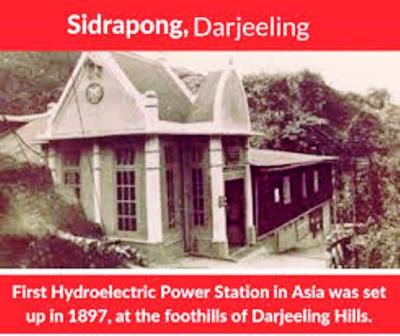 
Yuvraj Pradhan from Point Homestay, Darjeeling sends his experience and interaction with people in Sidrapong about its rich history and heritage. We agree Yuvraj says that Google can only provide us with basic information, but nothing beats meeting the people at ground zero and understanding their stories. Here is an account of his experience:

In a February weekend, I went for a solo ride discovering our own hill around Sidrapong Hydel Power. During the visit, met Shri. Dadi Ram Chettri (known as Sano Bhai Daju in his neighbourhood), a fourth generation of the family taking care of the Sidrapong Hydel-Power plant since its inception.

According to Dadiram, ‘the British after discovering the potential of a Hydel Power project at Sidrapong, had to.first get the permission of the Maharaja of Bardhaman who owned the tea garden in Sidrapong at the time. The British negotiated with the Maharaja for setting up the power plant and were finally given permission.

The project was inaugurated 10th Nov 1897 by C.C. Stevens, the acting Lieutenant Governor of Bengal. This began the functioning of the Sidrapong Hydel-Power Station, the first Hydel Power station in India.

The Joy of First Ignite

On the day, People were very excited to see how the light will glow. For many, making electricity out of the water was nothing short of magic. The town was filled with people from all over the tea gardens, up to the Shrubbery Ground.

Many had packed their lunch to be had at the venue and excitement was everywhere “Aaju batti balcha” waited everyone. in the evening ad daylight was dying out, the Power House started the Electricity supply. Everyone jumped in happiness, some. emotional, and some even crying at such an out-of-the-world event.

SEE ALSO:  Encounters of a Different Kind in the Dark Cold Evenings of Darjeeling
Powered by Inline Related Posts

The villagers and people who lived on ‘Dhipri Batti’ (oil lamp) felt nothing less than heaven when the electric bulbs sparked and lighted their house.

Some described it as starts, while others even They described to others wrote songs like the famous “Darjeeling Sahar Batti ko Lahar Baikunda Jhasto cha”

In the first phase, electricity was distributed as follows:

With the passage of time, the demand of electricity began to rise. The Single Phase Turbine could not meet the demands and had to be upgraded to the Three Phase Turbine.

The State Electricity Board kept Sidrapong Hydroelectric Power Station in top most priority and did not give any chance to have any minor defects until the Rammam Hydro Project came into existence. The Rammam project had higher capacity and generated many Mega Watts & brought huge revenues).

As soon as the Rammam Hydro Project was introduced, the downhill began for Sidrapong Hydroelectric Power Station. It was stopped for many years and left to neglect. Landslides damaged many of its channels but no immediate were taken to revive the station.

The Hydro Project could have been installed in any of the places nearby location, but why did the British zero down at Sidrapong? It is because Sidrapong is located in the centre of the three streams, geographically towards the concave base of the Hilltown.

SEE ALSO:  A Betrayed Queen and the Union Territory of Darjeeling
Powered by Inline Related Posts

The station has installed 3 Turbines, with each Turbine producing 200 kW & 6,600 volts each. At present, only one unit is functioning to generate electricity.

At present, there are about 11 families comprising about 40 people including children & senior citizens. Before 1978, there were about 60 families most of whom migrated due to the following two reasons:

For the First time, Mr.Subash Ghishing (the then Chairman of DGHC) had constructed that road to uplift tourism in that spot. But it was not entirely successful.

Secondly, during the time of Mr.Bimal Gurung (the then Chairman of GTA), the road was reconstructed. And now in 2019, the road condition not being in an excellent condition it takes 45-50minutes to reach Darjeeling town (12Km).

Having personally experienced, I feel taking a four-wheel like Jeep or Land Rover will be a more convenient way to reach Sidrapong.

To conclude, I strongly feel that our Heritage must be reserved, stories must be shared, and we must show respect and love to our place like it deserves.

The West Bengal State Electricity Board (WBSEB) should focus on keeping the station functioning and also take advantage of the huge water resource around.

The local Administration should also take a keen interest in it. Although 12-13 Crores had been provided by GTA, nothing convincing development had been seen by the locals till date.

Heritage should be preserved as heritage, without dismantling it. Our strength lies in our Heritage and destroying old structures to make way for new ones will only kill the charm of the place. Without heritage, we may even stop receiving the few tourists we get now. Improving infrastructure around the place will attract more people, like the one being don’t at Sandakphu road. Just Sidrapong or Sandakphu, Darjeeling has rich heritage and charm in the international tourism circuit and we must do the best to keep our reputation intact.

The Administration must give attention to the Good Quality Road. A good mode of transportation can attract a good number of domestic and international visitors, resulting boost in the economy.

Even the local students have to walk for 3hrs just to attend their schools. As most of their time and energy is spent on travelling, there is very little time for them to focus on their studies.

We must also not forget that Sidrapong is located 12 km way from the main town. With the pathetic road conditions and limited mode of transport, people face huge difficulties during medical emergencies. Perhaps the administration can look into holistic development of the place rather than addressing issues only when extreme situations.