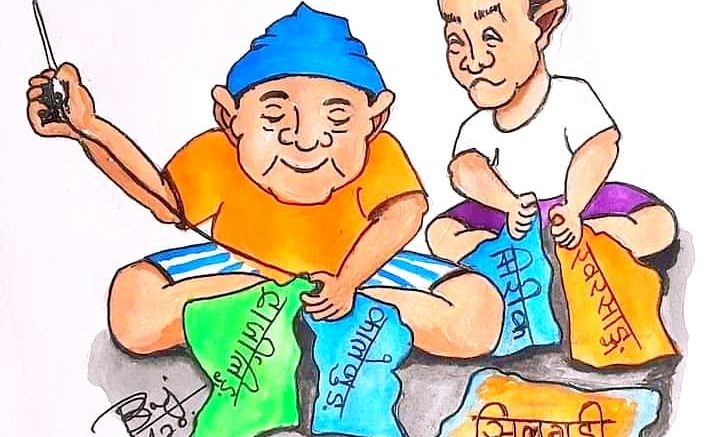 Elections in Darjeeling have never been so consequential, as previously it was contested on issues like Gorkhaland, but most importantly the leaders were able to appeal to the voters emotionally. On the other hand, the voters too were swayed emotionally to the cause of Gorkhaland. So, since 1986 whichever party raised the demands had won a majority of the Municipality seats, after all the Statehood is the ultimate goal of the people of the Hills.

However, in the present context of politics in the hills, the contest ahead seems to be all messed up and confusing for the voters. On one hand, we have GJMM who are contesting in 22 seats and have conceded 10 seats to the ruling TMC party. They are openly not in alliance with TMC, but likely to be in an electoral alliance. On the other hand, GNLF and BJP seemed all tightened up to contest together. They have even issued “Sankalp Patra ” together in a press meet.

The third front is the newly formed Hamro Party spearheaded by Ajay Edwards who has recently garnered much support from the youths from his social media campaigns and Edward Foundation’s scholarship programmes. With promises like raising 100 crores from the tourist for Municipality, Ajay Edward is leaving no stone unturned in campaigning and appeasing voters.

SEE ALSO:  Portrait of an Artist: Luthor "to become our people"
Powered by Inline Related Posts

However, Edwards arch-rival in the election in all likeness is Anit Thapa and his party BGPM. Their call for the Civic Poll is to “Save Regionalism.” and it is one of the main agendas in their manifesto. Other smaller parties like AIGL, CPRM are likely to support anyone of them or field independent candidates.

So, it is obvious that after the results are announced either two or more political parties have to come together in all depictions to form Boards. The proposition however is not that simple. The only theory that looks favourable is that Edward’s Hamro Party and Thapa’s BGPM may come together to form the Board as both of them are going to the polls without carrying extra baggage.

The other hypothesis can be either BGPM or Hamro Party have a coalition with TMC and may form the board. GJMM and TMC can also make Board if they win. However, in all motion, it’s a win-win proposition for the ruling TMC and a lose-lose situation for the regional parties.

Lastly, another argument is that if GNLF manages to win some seats and BJP loses, would the GNLF think twice before going into a coalition with TMC to form the Civic Board or with any other parties like BGPM or Hamro Party or even with GJMM? GNLF has been long away from power. They would definitely desire to get some even if they have the remotest chance or even at the cost of an alliance.

Can the Darjeeling Municipality election pave the way ahead for a newer alliance and strengthen regionalism or would it further deteriorate the existing localism and pave way for TMC to further establish their dominance. Would it be the end of the saffron brigade in the Hills? Would the election be a deciding factor for some politicians to retire from active politics and seek refuge elsewhere? Or Would it permanently sabotage the demand for Statehood?