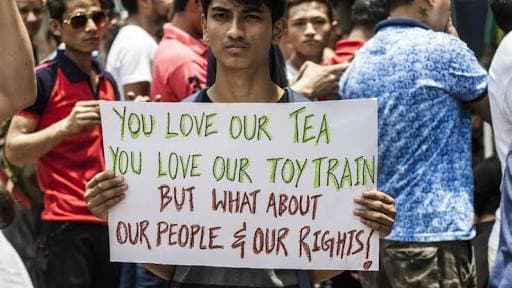 Everyone knows that Darjeeling has always been known best to the world for its Tourism and Tea. So, most of us are aware that Darjeeling Tea has its own standard place and is the costliest among all in the world markets and generates huge revenue from it.

Having said that, do we know how much the people who work on the ground level get paid? Most of us do not know or simply don’t want to know maybe due to our ignorant nature or just because most of the youths reside in towns and cities.

I would like to tell that the labourers who work throughout the rainy, hot and or chilly days for 8 to 9 hours a day for 6 days a week get paid only Rs 150 as their daily wage. And recently on 6/8/18 the wage got hike of Rs 22 and now they will be paid Rs 172 per day.

So, is this fair for those workers who happen to have their families, children who go to school and have to look after the health and hygiene of the families . This mere amount that they get paid is not even enough for a family consisting least of 4 people.

The Tea from Darjeeling Hills generates crores of rupees. Why are Government and the company owners the only ones who are benefited from it? Don’t the workers on the ground level have the right to basic standard living?

Many questions arise when one goes into this topic. Tea Garden Workers must have minimum wage of at least Rs 300 to Rs 350 per day in order to run their livelihoods smoothly. Remember, if Tea Gardens fail to flourish then the economy of our very own towns will also have to face the damage.

SEE ALSO:  Perceptions: My four-year-old and I
Powered by Inline Related Posts

On closing I just want to say that if the condition of Tea Gardens doesn’t evolve, then sooner or later all the Tea Gardens shall be closed as there wont be a single person who will want to work on these Tea plantations.