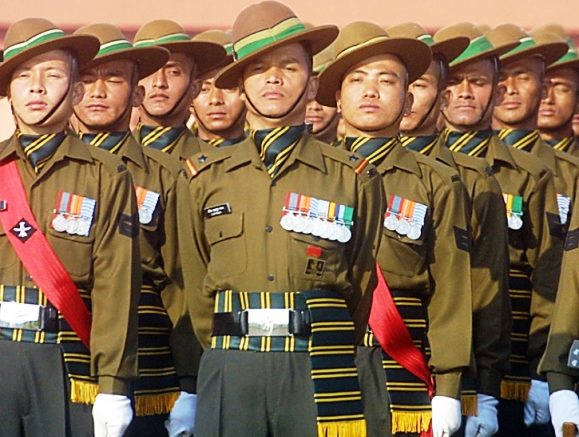 
Standing in an isolated, freezing bunker on the Line of Control in Kashmir, a young Gorkha boy—nineteen years of age, newly trained in the art of war, and eager to prove the worth of his blood—receives orders from the platoon Commander—a smartly dressed Lieutenant—who too is new to the art of war. Full of “Josh”—the only thing that keeps the men running up there—the officer, freshly trained from the National Defence Academy, Pune, and the Indian Military Academy, Dehradun, pumps his men with motivation by reciting the ballads of the brave, and narrating the spunky ventures of their “Paltan” in crisp Gorkhali.

Their “Paltan”, or Battalion, is one of the finest in the army. It is the 3rd Battalion of the 5 Gorkha Rifles, abbreviated as 3/5 GR.

It is going to be their Battalion’s first foray in the Kargil War.

Meanwhile, in a world that is non-existent to them, in New Delhi, some powerful men, oblivious to the condition of the soldiers up there, blissfully take decisions which play with the soldiers’ lives in a way similar to the strings of a puppet being controlled by a rookie.

“Under no conditions will your men cross the Line of Control, as it may escalate the conflict manifold. Reduction of flying sorties by fighter squadrons from Srinagar and Pathankot to be put into immediate effect.”

Many applaud this stance of the government. But the reader is smart enough to judge its prudence. Either you take the risk or lose men’s lives…

The young boy strips his rifle, cleans it and reassembles it. He slings his sheathed “Khukri” around his waist, over his ammunition pouch. Full of patriotism and the mystical “Josh”, he gets ready to be a part of the Battalion’s advance party to the objective which they are supposed to take.

The young Lieutenant gets briefed by his Battalion’s Commanding Officer. He is to lead the advance party into the enemy’s plain sight and capture the enemy’s machine gun post, to serve as a decoy to cover the advance of the Battalion’s main segment towards the objective. He is aghast. His mission is similar to a fanatical, suicidal mission. But he has learnt to obey without questioning. With a brisk salute, he leaves the Commanding Officer’s den. He writes out the last letter to his family, which is a custom in the forces, whenever a soldier goes on a mission during the war. He remembers his parents, kisses the photograph of his sweetheart for the last time, gets into the jeep, and proceeds towards the magazine to collect his weapons…

Artillery shelling begins. It comes as a precursor to the Indian attack on the hill feature by 3/5 GR. After thirty-five minutes of non-stop shelling by the Artillery Units, the Gorkhas move in. The young officer, with fear in his heart and an unconcerned look on his face to hide his fear―which is contagious―charges towards the enemy lines, his men following him. The Battalion’s war cry breaks the silence of the cold morning, and the enemy is caught sleeping. However, the enemy soon mans its posts and the initial advantage of surprise that the Gorkha advance party had, dies out. The young Lieutenant knows the worst, for the responsibility of his men’s lives rests upon his young shoulders, as the leader.

The young soldier follows his Lieutenant. He forgets all of his erstwhile patriotism when he sees blood splutter from one of his close comrades’ mouth, who has been hit in his abdomen. The Lieutenant urges him to move ahead and take cover. The young soldier knows that the orders are the most sensible, but he just cannot leave his friend at death’s door, in the enemy’s plain sight. Suddenly, his dilemma ends as a second bullet penetrates his comrade’s skull, thereby martyring him.

Overcome by a rare mixture of anger and fear, the young boy makes a solitary charge at the enemy position and jumps in front of the enemy machine gun. The Lieutenant tries to restrain the boy from exposing himself to the enemy, but the boy moves as a man possessed. He dodges some of the enemy bullets and reaches up to the enemy’s machine gun post. He knows he has received multiple shots. He does the best thing that a real man could have done. Knowing that there is no going back, he grabs the enemy’s gun barrel―sticking out of the machine gun post, firing at the rest of the advance party―and takes an entire burst of the enemy’s machine gun fire in his chest, thereby entering the league of the revered few who get the chance to live and die for their motherland.

The Lieutenant is enraged and amazed at the same time. In a war, you pay for time with blood—the Lieutenant knows this only too well. As soon as he sees the temporary lull in the enemy barrage due to the young soldier’s actions, he moves up to the machine gun post with a platoon, and lobs grenades into the MG post, thereby pulverizing it and achieving his objective. Out of the thirty men assigned this task, eighteen survive. The casualty count could have been much higher, but for the action of the young Gorkha soldier. The officer knows this fact very well. His voice breaks down as he informs the Commanding Officer about the victory. He doesn’t want to fight as an officer ever again. An officer in the Indian Army is always responsible for his men. His men are celebrating but he is a hollow man. He has led his men to victory, but only he realizes what he has lost.

Meanwhile, the decoy provided by the Lieutenant’s men allows the Commanding Officer to attack the main hill feature. Upon reaching the top of the hill, each soldier of the Battalion’s main assault part unsheathes his “Khukri” and pounces upon the enemy bunkers like a tiger. As the enemy realizes that it has met its match, it flees to regroup. As the tricolour flies on the hilltop, a solemn Lieutenant observes it from the captured MG post. The Battalion is victorious but he has lost a part of his heart with all the men whom he has lost. His first battle has been a success and he is praised by all, but he knows that if he ever has to fight again, it will not be for the Battalion, not for God, not for good or evil. It will be for the man next to him, and the billion people who trust him with their lives—who can have a good night’s sleep because of him being out there; who can live normal, civilized lives because people like him are out there to live an abnormal, extraordinary life, ready to sacrifice it for their sakes…

“No one remembers a warrior until the enemy is at the gate.”

Letter To The Editor, Local, VoxPop