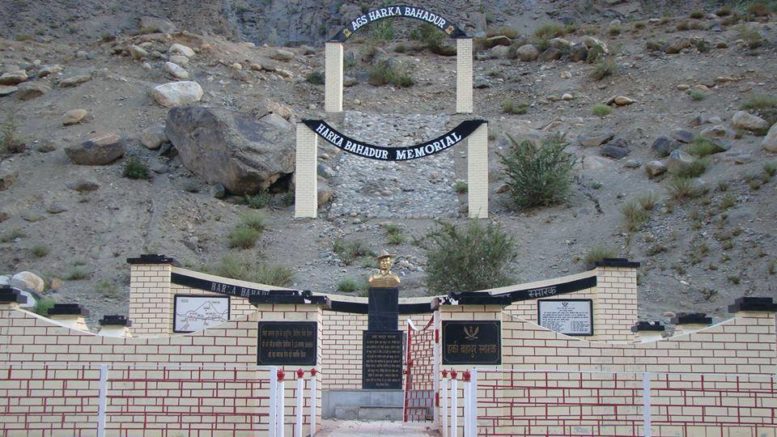 
July 26th is celebrated across India as the Kargil Vijay Diwas to commemorate the glorious victory of India over the Pakistani forces in 1999.

But what about the forces themselves? Who do they celebrate?

When it comes to Kargil there is only One Hero – in fact, a LEGEND who stands the tallest. As far as the forces are concerned there is One Giant who along with his brave comrades literally saved Kargil for India, and that did not happen in 1999.

It happened in 1948, during independent India’s first war.

TheDC is proud to present the story of a Gorkhali legend who has continued to inspire generations of soldiers serving in the Indian army in Kashmir.

Barely a few months after independence, Pakistan invaded India via Kashmir with an overwhelming number of forces, and such was the disadvantage our troops were in, that India was on the verge of losing the entire Kargil region to Pakistan.

The main problem was that our troops could not reach the battlefield due to a lack of roads, and they had to reach Leh via Zojila, Drass, and Kargil. Despite poor facilities and equipment, hard work by our Engineers helped in moving the Tanks to reach up to the Zojila pass – in what is called THE BATTLE FOUGHT ON DONKEY TRACKS – But it was still a long way from the actual battlefield.

As in Kargil in 1999 when the 1/11 Gorkhas were the First battalion to be deployed for Kargil, back in 1948 it was the 1/5 Gorkha Rifles under the command of (then) Lt. Col Anant Singh Pathania, who was incidentally the first Indian officer to command the Gorkha Rifles and win a Military Cross, began moving northwards in the direction of Kargil.

During the course of the 1948 war, the most fearful battle was fought for the then Khera bridge which connects Kargil to the rest of India and it was vital to both sides from strategic, military, and geopolitical aspects.

Since the Pakistanis had captured the Kargil area, they were well entrenched in the area with superior firing positions and well-supplied armory. On the other hand, the Indian army had been on a move for a while and the supplies were not as regular, also they were in inferior positions which exposed them to firing by Pakistani troops.

The battle at Khera Bridge

The 1/5 Gorkha Rifles were engaged by a strong force of Pakistani defenders at the Khera bridge over the river Shingo. The battle was so fierce and the Indian troops were so disadvantaged that at one stage of the war the capture of the bridge seemed to be by all means impossible and unlikely. Until one Gorkha soldier decided that loss or withdrawal was simply not an option.

The main problem for the Indian troops was that the enemy was too well set and they could not keep on fighting the enemy from a distance, they needed to take the fight to the enemy or give up. The battle was fierce and most of the troops guarding the bridge were American-trained Pak soldiers with heavy machine guns.

Despite all the odds young Subedar Harka Bahadur Rana and his valiant men of 1/5 GR managed to cross the Shingo river, take the fight to the enemy in the positions where they had felt invincible, and beat them into surrendering or retreating.

Sub. Harka Bahadur and many of his friends died in the operation but the Gorkhas marched ahead till they fought up to Kargil. As one of the pictures will show, before Sub Harka Bahadur and his friends decided enough was enough, it was Pakistan on the other side of the bridge, now the border is more than 5kms away.

Given that so many of our brave hearts have given their supreme sacrifice for our motherland in Kashmir, nowhere in Ladakh or the entire Kashmir will you see a memorial solely dedicated to a single person? The memorial dedicated to Sub Harka Bahadur is an exception.

Sub Harka Bahadur Rana earned that rarest of the rare honor not only due to his valor and dedication for our motherland but also for that rare indomitable spirit that turned the course of the war and helped in conjoining Kashmir with India forever.

Lt. Col. Anant Singh Pathania who commanded the mission was decorated with Mahavir Chakra, and Late Subedar Harka Bahadur Rana won Military Cross for his bravery and exploits. Today a new bridge has been built by the Indian Army and is known as Harka Bahadur Rana Bridge.

In Military circles, it is said that the battle waged by Col. Phatania, Sub. Harka Bahadur Rana and their men of 1/5 Gorkha Rifles were one of the hardest battles ever fought.

While others chose to ignore or forget our brave hearts, we refuse to forget the real Legends of Kargil – like Harka Bahadur, without whom there would be no Kargil in India.

Be the first to comment on "Remembering the Original Legend who saved Kargil: Subedar Harka Bahadur Rana, Military Cross"