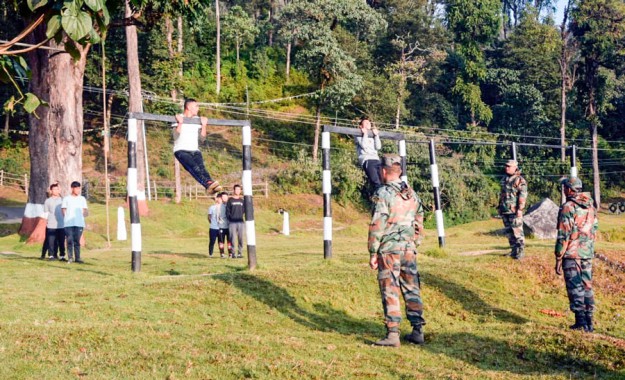 
“Heads I Win, Tails They Lose” that’s how I felt when I was younger, much younger.

In all this I am reminded of my days in college, when I too had a brief stint with the Army.

When we were young my father always wanted us to excel in studies. We were rarely given pocket money to explore the world. However money was always there for studies, exams and interviews.

One day a friend’s father told me that I should join the army. He told me that it was great to serve the nation at the forefront. Well for that I had to sit for an exam and then I would be called for an interview at SSB at Bangalore, Allahabad or Bhopal. The journey and stay would be all sponsored by the Indian Army. Well the second part was more exciting for me rather than the first, as I could then travel all by myself at government expenses. I started preparing for the written test. Competition Success Magazine came to my rescue of preparing me partially.

In 1996, I quietly filled up the UPSC form for fifty rupees and then one fine morning I told my father that I had filled up a form and Sunday I had to sit for an examination at TNSSS in Gangtok. He gave me a disappointed look. I was the only son so he wanted me to be around when he would be old. He didn’t say that but I could read that in his expressions. Mom just said OK but I could see that same expression on her face. They always thought going to paltan was equal to losing a son.

Saturday I came to Gangtok and sat for the exam on Sunday and then returned back. I was sure I had done exceptionally well . The second option of going around free was too tempting for me. Three months later the results were declared and I had cleared for both the Army and the Airforce. I again informed them about it.

Voila… the centre was 17-SSB at Bangalore just as I wanted. With all the requisite haircut, two white half pants, a white T Shirt, Black shoes and White keds, Trousers and formal shirts (both which I didn’t posses as I wore mostly jeans and T shirt) I boarded a train to Bangalore and reported at the centre.

Psychological test , Group discussion, Group Tasks and Personal interviews is what followed for the next four days. They wanted to test if I had “Officer like Qualities”. The assessments would start early morning at 8AM and we would be free by 12pm after lunch. The next 8 hours would be ours . We spent that time to explore the city and would rush back to the unit before 8PM in the evening. Bangalore was a fun city. I was having a roll.

Once I cleared the interview, I would then have to go through a preliminary Medical test before moving to Mysore for the PABT (Pilot Aptitude Battery Test)…. What happened during the Interview is another hilarious story. I will share it someday. I prayed hard. I wanted to clear the SSB so that I could go to Mysore… just to see the city of course.

Surprisingly I had cleared the SSB interview. I felt nice that I did possess the Officer Like Quality… But was rejected by the medical board. First a temporary rejection due to my weight (I was 8 kgs over weight) and then due to knocking knees and flat foot…I could not go to Mysore 🙁

The reality was – I was rejected by the Army. Forever!!!

I called home and informed that I was boarding the train back. My father asked me if I had been selected, cause my voice did not sound disappointed enough. He did not know that my intentions of appearing for the SSB interview were different. When I told him that I failed. His voice suddenly changed. He couldn’t hide his excitement, yet he wanted to console me. I could actually feel the excitement on his face through the telephone line. As a father he thought I needed his assurances.

“Come back he said. There is nothing there for you. Don’t feel sad. The army does not deserve a bright kid like you” he said. I simply said “yes” and kept the phone back.

Many years later I asked my Mother about it. She smiled and said that my father was very happy that day. He actually celebrated my failure…

Well! he did not know that for me It was – Heads I Win, Tails They Lose

In Fifty rupees I had done Bangalore Darshan …