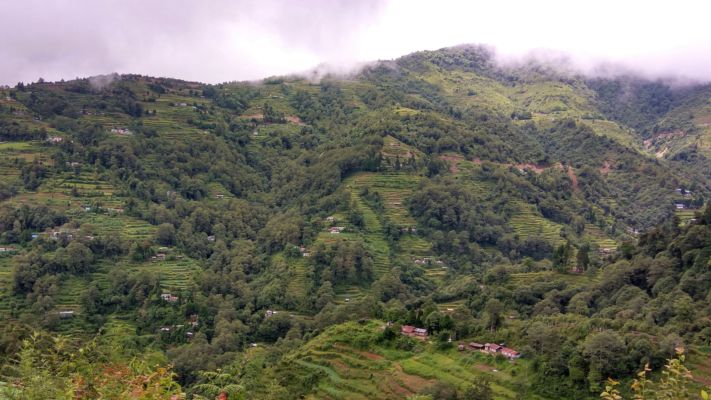 
Although Darjeeling and Kalimpong districts of West Bengal and the state of Sikkim have been projected predominantly as tourist sites, the mainstay of the rural population continues to be agriculture. According to Census 2011, the majority of the population here are rural (60.58% in Darjeeling-Kalimpong & 75.03% in Sikkim) and agriculture is the main occupation. Here farming communities depend on wage labour, small businesses and tourism (homestays) to augment their income from agriculture and all these were also closed during the lockdown period.

Our recent survey on the impact of COVID19 on rural communities in the Darjeeling-Kalimpong area revealed the inability to sow key crops owing to the closure of seed shops and the inability to sell food and cash crops due to supply chain disruptions were two major impacts of the pandemic related lockdown.

Therefore, agriculture income, which is the primary means of sustaining the life of farmers, was negatively impacted. Here farming communities depend on wage labour, small businesses, and tourism (homestays) to augment their income from agriculture and all these were also closed during the lockdown period. This had larger livelihood impacts like food insecurity, access to medical facilities, an increase in debts, etc. All these are bound to have long-term negative impacts on the livelihoods of these mountain communities.

The Darjeeling-Sikkim Himalaya is part of the Himalaya Biodiversity Hotspot with rich biodiversity and diverse ecosystems but with multiple threats particularly related to climate change. The region is also rich in food crops. Here, agriculture and the surrounding natural ecosystem (forests, natural springs) are closely linked.

The agriculture system practised is a mixed crop and livestock management model. Food crops, horticulture crops, cash crops, and livestock rearing are the key components of this farming system. This is done in small patches of land and is highly dependent on the forests and its resources which provides tangible (water, fodder, litter) and intangible benefits (soil conservation, climate regulation, cultural and spiritual functions) and sustain farm production.

Like in all other mountain areas farming in Darjeeling-Sikkim Himalaya is already riddled with challenges:

These conditions have led to widespread changes like the replacement of food crops with cash crops, abandoning farming due to urban migration for better livelihood opportunities, and opting for daily wage labour which is perceived as “less risky” than agriculture. The current COVID-19 pandemic has further aggravated already existing risks for these mountain farming communities.Over the years after suffering losses, this interaction which was once of ‘tolerance’ has evolved into ‘conflict’ for farmers. The farms in these villages are frequently raided by wild animals throughout the year.

The proximity of the villages to forests that fulfills the resources required for sustaining farming results in human-wildlife interactions which are often negative. Over the years after suffering loss, this interaction which was once of “tolerance” has evolved into “conflict” for farmers. The farms in these villages are frequently raided by wild animals throughout the year. Communities perceive that this is driven by an increase in wildlife population and habitats (forests) that are contiguous with the villages as a result of effective conservation.

The other driver identified by them is habitat degradation by human activities and thus wild animals venture into agriculture land for food resources. Unlike in the low lands where large mammals are the main conflict causing species, in the mountains, we recorded 15 species of small mammals and birds causing huge loss of crops (26 different crops) and livestock. Our monitoring of depredation during 2013-2014 in six villages showed that some of the predominant problem animals were Barking Deer, Wild Boar, Macaque, Indian Hare, and Porcupine. These were responsible for 848 depredation incidents with a loss of 6,682 kg of food crops worth Rs 2,49,642 in the same period. A farmer reflecting the frustration of the farming community affected by crop depredation What to do? Monkeys are going to displace us soon. They don’t allow us to eat any of the crops we have cultivated. Soon, we may die of hunger.

Agriculture has been severely impacted by COVID19 and villages with crop and livestock depredation face more vulnerabilities. In the post-COVID period, the road to recovery will be slow and with the return of migrant workers to their villages, there will be competition for available wage labor and other employment opportunities.

Rural communities may face severe cash crunch for accessing medical facilities, meeting costs for children’s education, purchasing essential items, and agriculture inputs. While the government continues to give food supplies these are limited and now with reduced purchasing power access to affordable and nutritious food items may be compromised. In the post-COVID 19 period, the focus will certainly be on ensuring agriculture income of rural communities, but with crop and livestock depredation so rampant, mountain farmers may be compelled to give up farming and thus be pushed more towards poverty.

Writes: Vikram Pradhan & Sarala Khaling. Vikram Pradhan is a research associate and Sarala Khaling is the regional director at Ashoka Trust for Research in Ecology and the Environment (ATREE) regional office for Eastern Himalaya-Northeast India in Gangtok, Sikkim. The work on monitoring crop depredation was supported as part of a Tata Trusts project.

"JAI GORAKH" The boys on the way back from the RD

FROM NEPAL WITH LOVE Devotees from Nepal, those