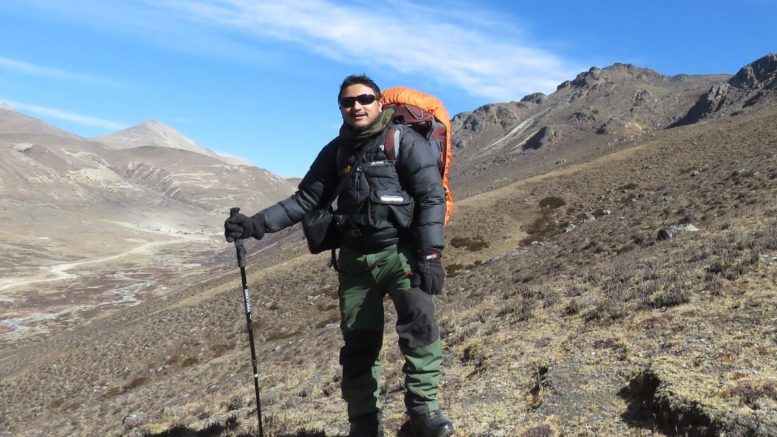 TheDC team send a warm “Shout Out” to Atharva Singh, a proud son of Darjeeling for etching his name in the annals of Birding in India and also for keeping the Darjeeling flag flying high

Atharva is a Ph.D scholar at the National Environmental Engineering Research Institute (NEERI) and a Research Scholar from Bombay Natural History Society (BNHS). His discovery has made our hills proud!!

A team of scientists from Bombay Natural History Society (BNHS), Mumbai, while exploring the high-altitude coniferous forests of Arunachal Pradesh, has recorded a rare species of bird which has been identified as the Three-banded Rosefinch after detailed observations.

According to assistant director of BNHS, Dr. Girish Jathar, this species is a resident of Southern China and vagrant in Bhutan. Thus, this is the first confirmed report of Three-banded Rosefinch from Arunachal Pradesh, a new addition to the list of birds from India.

The bird was recorded on February 8, 2021, but the team some took time for confirmation. “We recently published this finding in the journal Indian Birds. Our team is conducting intensive surveys of finches across the Eastern Himalayas as a part of an ongoing study funded by Oracle,” said Dr. Jathar.

Dr. Jathar further said that during one of these surveys, BNHS researchers Atharva Singh and Himadri Shekar Mondal first photographed a male and a female individual of this species at Sela Pass, Arunachal Pradesh, at an altitude of 3,852 metre above the sea level. “This pair was seen with a flock of White-browed Rosefinch, a species commonly seen in this landscape,” he said.

The species belongs to the family of finch, Fringillidae, which are seed-eating passerine birds with a distinctively conical bill.

Atharva Singh, lead author of the published work, states that the Three-banded Rosefinch may be using the high altitude temperate coniferous forest of Arunachal Pradesh as a passage while migrating from China to Bhutan.“Thus, this landscape is a potential corridor for this species.

Little information is available on the ecology of this species,” said Himadri Mondal, who is the second author of this paper.

Dr. Jathar, who is leading the Climate Change and Himalaya Program at BNHS, mentions that the altitudinal record of this species sighting from India is higher than its previous known altitudinal records from China. Hence, it opens up interesting ecological research on the species in the future.

This new addition of birds for India by scientists from the BNHS highlights the importance of intensive surveys in the least studied landscapes like the Eastern Himalayas.

[With inputs from Times of India and The Hindu]

Portrait of an Artist: Mosaic Thoughts