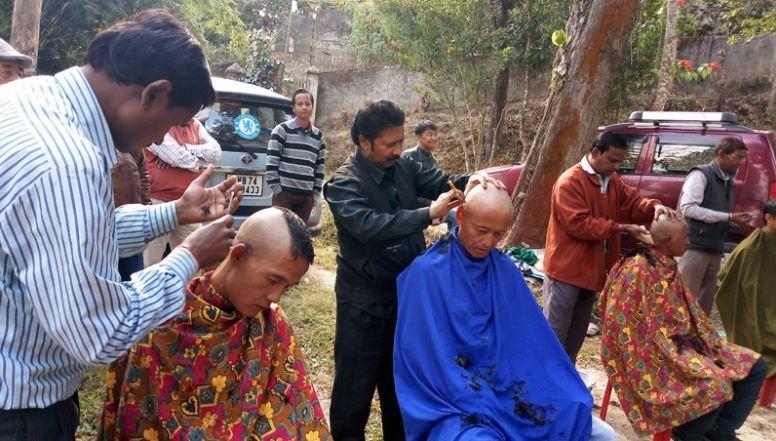 The youth wing of Jan Andolan Party yesterday tonsured their hair, as a protest against the “politics of division played by West Bengal, and certain hill based political groups working in collusion with West Bengal to douse the Gorkhaland demand.”

Accusing the Anit Thapa- Binay Tamang (AT-BT) faction of GJM, and Gorkha National Liberation Front of selling out the Gorkha dreams, and self-respect of the Gorkhaland martyrs by auctioning off their sacrifices at a price tag of Rs 2 Lakhs, the JAP Youths tonsured their head, as a mark of mourning. While 15 JAP youth activists tonsured their head yesterday, more youths and Party leaders are expected to join the protest.

Speaking to the press, Mr. Bhupen Rai the General Secretary of JAP Youth wing said, “though tonsuring one’s head may seem like a small affair, but for us this is a very personal expression of disgust and loss that we have felt. We are mourning the loss of Gorkha unity, and the death of self-respect among certain politicians who have rushed in to sell off the Gorkhaland demand for their own persona benefit.”

Be the first to comment on "JAP Youths Tonsure Hair to Protest “Sell Outs, and Politics of Division Played by West Bengal”"