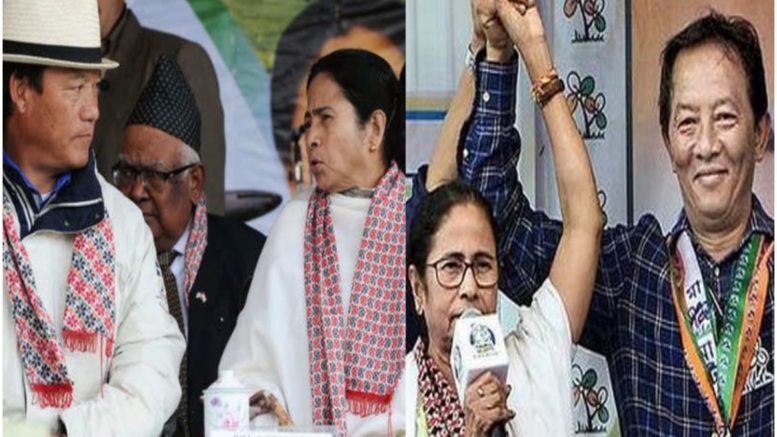 
Now, with the announcement of poll dates by the Election Commission for the West Bengal Assembly elections and the state going into the electoral mode, for the first time in the Darjeeling Hills, the century-old emotive issue of Gorkhaland is conspicuous by its absence, as it has been put to the back burner by the principal parties GJMM 1 and 2 after almost a decade.

It must be remembered that ever since the emergence of GJMM as a dominant hill party piggybacking on the sentimental issue of Gorkhaland, the issue had been made poll plank even at the Municipality elections, and all the logic-defying citizens continued to vote despite knowing that the Parliament is the only appropriate forum to address their aspirations. Like rats dancing to the tune of Pied Piper, hill people continued to blindly follow the so-called Gorkhaland leaders who could even prophesize the date of state formation unbeknownst to New Delhi.

Between 2007 and 2017, anyone criticizing the GJMM party or exercising democratic rights by showing allegiance to TMC would amount to a sort of seditious act. It was only in 2017 that the party thought it was opportune time to press ahead with the Gorkhaland agitation under the garb of linguistic imperialism for the state government had just imposed the Bengali language to be compulsorily taught in schools across the state, the order that it rescinded later on.

The fall out of this ill-conceived, strategy-less agitation is before all of us to see amidst the exchange of tirades between the two warring factions of GJMM. What has been more painful, demoralizing than the failure of agitation itself is the manner in which the GJMM leadership cowered before the CM Miss Mamta Banarjee, once their bete noire. Their political gambit of allying with TMC by seriously compromising the century-old emotive issue of Gorkhaland has not gone down well with the large section of the conscientious population who value self-esteem above political manipulation.

The upcoming assembly election comes as an acid test for the leaders of both GJMM factions to redeem their political image from being compromised leaders who can’t strike an honorable bargain with the state government. After all, by eating their own words, backtracking their resolve, common people are feeling being cheated and opine that their allegiance to the state government has been more of a Faustian bargain since they all have traded the century-old martyrs’ dream of a separate state against their immunity from nagging legal cases arising from the ill-conceived agitations.

However equally irksome has been the silence and lethargy of the BJP in according tribal status to the eleven Gorkha communities and working towards the vaguely defined permanent political solution. Hill people still feel let down by the saffron party despite helping it win in three successive general elections from the constituency and are still sluggishly hopeful that it would deliver something positive in the interest of the region.

It is in this catch 22 situation that the Hills has been caught now, and the denizens would be cautiously going through their manifestoes, being partly sentimental in choosing the lesser of evils would be the only political choice left for all. Only on May 2, would we be knowing if the Faustian bargain has really struck a chord or not with the hill citizens.

“BJP Leaders Have Been Hoodwinking the Hills” – alleges Aroop Biswas

The Rise of “Hamro Party” and the Fall of “Hamro Sapana”