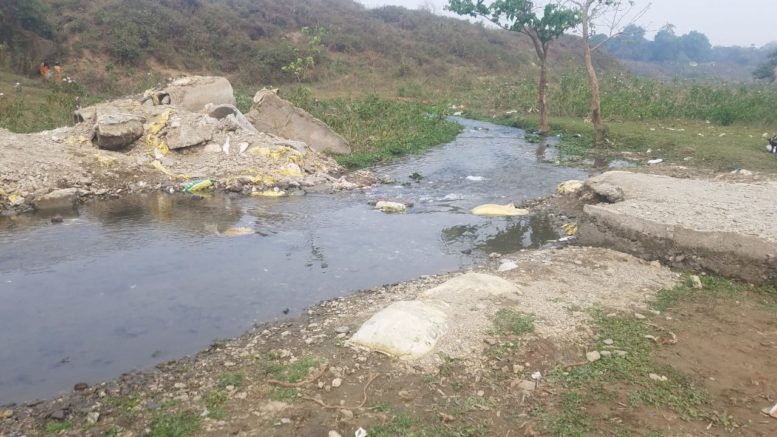 
The villagers at Painakumari near Garidhura woke up to loud noise at around 1:15 AM on 5th February, 2019. By the time they realized what was going on, it had already been too late. The narrow bridge they had worked very hard to rebuild, after months of painstaking labour, was being destroyed in front of their eyes. What followed was described to us, as a “night of horror.”

This is what we have been able to ascertain so far after talking to the villagers. They have requested us not to use their names, so we are keeping this in a report format, but all that we are reporting here on is based on what they have told us.

Painakumari is a village which has been existence since the British period. Back then the entire area was a dense forest. The village naturally grew and today there are around 500 households. The villagers have access to all the modern facilities – phone, electricity, internet, tv etc, except for road.

The village sits next to the Sukna Army camp because of which they have not been given permission to build a road.

Their only connection to the main road used to be through a concrete bridge built back in 1988. This bridge would only allow for a bike to pass, and there was no through fare for the vehicles.

The monsoon of 2018 wrecked havoc on the village, and much like every other part of Terai, Painakumari also witnessed damages to their infrastructure, due to flood. In their case, the infrastructure being the long concrete bridge that connected their village to the highway.

On the 27th of  August, the bridge collapsed, and on the 28th children from the village going to school were nearly washed away due to raging torrent. Thankfully they were saved by elders who were also passing by.

This got the villagers to realize, they cannot take risk with their children’s lives. So they decided to pool in their resources together and fix the bridge, and that’s what they did.

They played Deusi together and collected funds, people gave donation according to their abilities. Some who were building homes donated cement, while others volunteered to help with the physical labour.

Thus, in the true spirit of cooperation, the villagers started work on rebuilding the Bridge on Painakumari Khola from the first week of November, 2018. Everyone volunteered every Sunday with the work, and thanks to their collective efforts and concrete spun pipe, the work was finally completed in four weeks time.

All through this, the Army people did visit the site of bridge construction, as Painakumari khola is also their water source. So they would ask, what’s going on and those present would explain that they were fixing the bridge. The Army folks didn’t object. But all that was about to change.

On the 4th of February one captain EME Captain Sachin came with some troops and threatened to destroy the bridge. Villagers say, this was because, according to the army the Bridge was too big. The villagers however showed that the bridge could still only transport one motor-bike and that vehicles couldn’t pass. Captain Sachin too left.

SEE ALSO:  The Flags of Our Fathers - We shall carry forth with pride
Powered by Inline Related Posts

Later around 5 PM the army under the command of one Col Diwakar Sikh Li came with JCB and additional forces including police to break down the bridge. The villagers say Col Diwakar was rude and threatened to run JCB over them. But the villagers kept their peace and pleaded with the army personnel not to destroy the bridge, which they had built painstakingly.

Eventually after much coaxing and discussion, around 8 PM, an agreement was reached that the width of the bridge would be made smaller. They villagers however told Col Diwakar, they wouldn’t be able to reduce the size that very moment as it was late into the night, and that they would undertake the work in the morning. Col Diwakar and his team left.

We are uncertain what happened after that, since after repeated tries to the Army Spokesperson Eastern Command, all our calls have gone uninformed.

However villagers have told us that the army personnel used force. In the milieu five people had been grievously injured, three of them are women and one of them is a senior male – DB Kaucha (60+), Lila Sharma (50), Laxmi Rai (40+), Januka Chettri (35), Hemraj Chettri (30+).

Following this, the villagers have lodged a General Diary with the Garidhura police against the Army and the Capt Sachin and Col Diwakar, and continued their protest.

Today the SDM Kurseong came to the venue where the villagers are protesting, and requested them to lift the dharna. He has assured them that due action will be taken.

Will the villagers ever get justice; will their children have a safe path to walk to school when the river rises again, the villagers are worried.

WISHING YOU ALL A VERY HAPPY REPUBLIC DAY

LETTER TO THE EDITOR: Drug Addict Menace in Middle