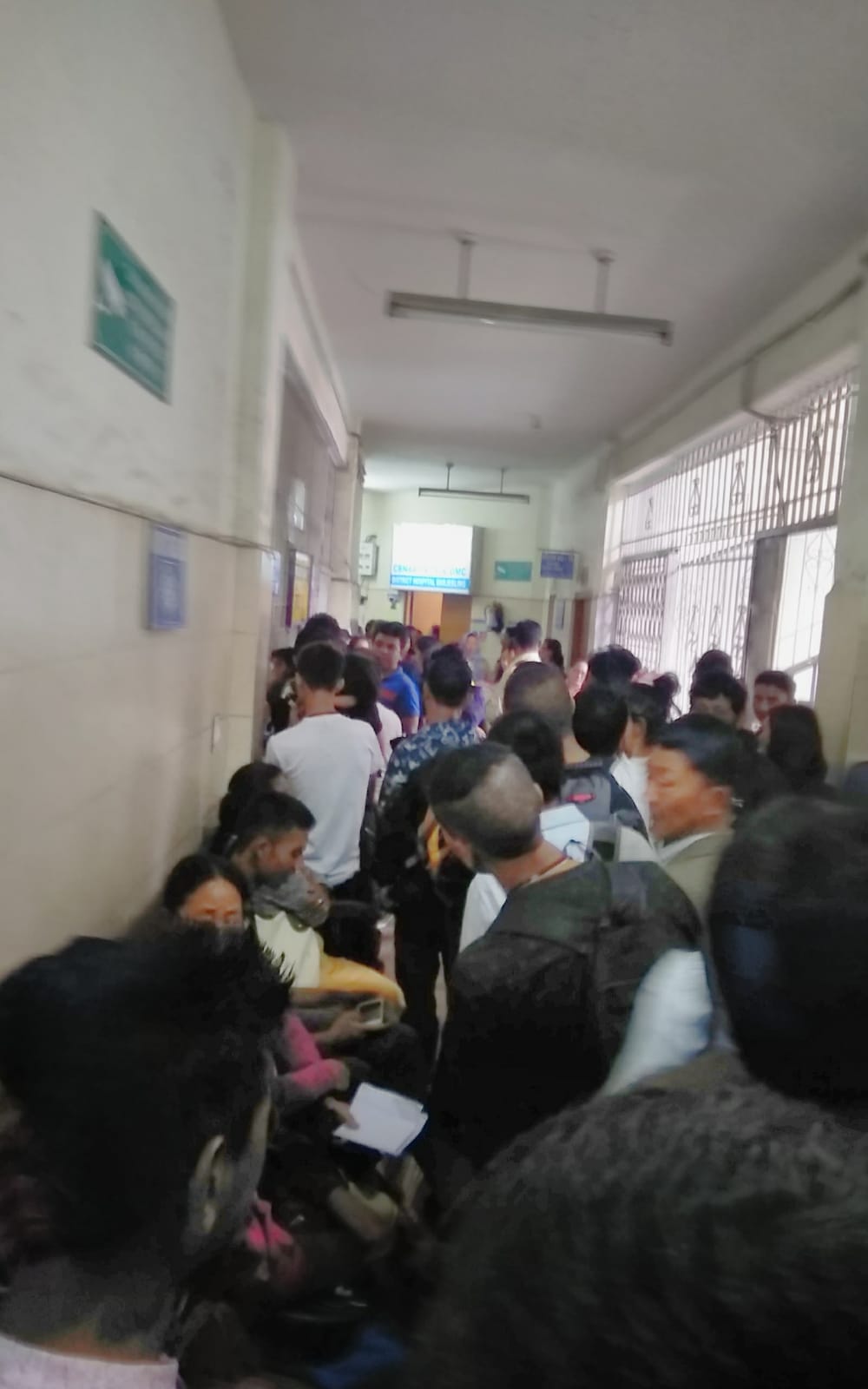 Dear Editors,
I have a not so good experience to share about dismal health facilities in our hills, and also have some rants to rant. Requesting you to kindly give space on your platform.
The Experience
In recent days I am having some medical issues or to be specific some sort of gastrointestinal discomfort – To be more specific and simplify – Bhudi poleko. When home medics and other stomachache medics couldn’t comfort me, I thought to reach out to professional medical help i.e., to doctors. I spoke to some friends and got to know about 2 Gastroenterologist (Don’t know if there’s more of them) in Darjeeling in two Private Hospitals. As it’s a health issue which I should not neglect so I thought to go for the specialist service. Hence I started early from home, took the first bus (30 kms away from Darjeeling town) and reach one of the renowned private hospitals at around 9 AM in the morning. By the time I reached there, the hospital was already crowded. I reached to registration (appointment) section and what I was told just shock me. My registration number came to 40 and for that, I was told to wait or come at 3 PM.
A wait of 6 hours.
6 hours may sound not too shocking in normal circumstances but in a Medical situation, isn’t that bit longer to wait? Though it wasn’t an emergency situation, it was still worrisome.
So I thought to give a shot in another private hospital. I was in another private hospital in the next 15 minutes. Reached there and found the same scene – Crowded, and when asked about the appointment with Gastroenterologist the reply was same. In fact, the waiting time was more than the previous one. They asked me for the wait for 7 hours, which would make it at 4 PM.
Felt sad, enraged, desperate. I started searching or other options but found nothing. At last a friend of mine suggested going to the district hospital Darjeeling (Commonly known as Eden Hospital). Though I was also told that I may not get gastroenterologist there – Not sure if it’s just today or there’s no gastroenterologist available in the district hospital.
So without wasting any time, I reach OPD section of District hospital Darjeeling. As it’s a government hospital and check up is free, I was expecting a crowd, but the crowd I saw there was far more than what I was imagined it would be like.
I felt like I am in some sort of emergency medical camp there (picture posted). A huge line up had formed just to get appointment tickets.

I am not sure if it’s same every day or just today only. From the people in queue around me – someone said “Yestai Ho”, someone said “yeti saro ta hudaina aru bela” and someone said “Aaju ta kamti po hola”, and another one added “ladies haru ko ta jhan laamo cha… para sama”.

Here I also noticed that this space in OPD section of district hospital is multipurpose. Its space for the line to stand to get the appointment tickets, its space for patients, their relatives, and hospital staff to walk, it’s also space for patients to wait for their turn to visit the doctor – WAITING ROOM.

There I remembered a TV debate last year where a TMC leader claimed in live TV that “Didi has made super-specialty hospital in Darjeeling”. May be she was talking about this MULTIPURPOSE corridor. The rush suggested it was indeed super special, even fish markets down in Calcutta are less crowded.

Finally, after an hour of standing in line, I got my ticket and as expected I was asked to visit the General physician in Room No 13. Thela-thel gardai I reached to the room no. 13 only to find long queues again. I joined the queue and many of those who were behind me in Ticket counter line too joined me. I wondered to myself ‘was there not much doctor available so they were sending all of them to that general physician?’ By then it was past 11 AM and hungry – as I had started early I hadn’t taken my breakfast – with a gastrointestinal problem, things started turning troublesome for me. I thought I should quit this here and get out from there.

Then I hear someone saying “Paanch Paanch jana halcha, chito huncha”. I asked her “Paanch Paanch jana?” She said “hajur ekfero maa paanjana check garcha”. I was surprised and a little shocked to hear that. But then I looked around. The crowd of some hundred people and that time limitation. We CANNOT BLAME doctors and staff for that… maybe they are trying their best to reach all the patients.

There, that “Paanch paanch jana” thing made me decide to not leave but see and experience how the things go.

Between my wait, I looked around me, saw any senior citizens, sick and weak, some barely able to stand, some parents holding their babies, waiting for their turn to get a ticket, turn to visit the doctor. Talked with a very old Baajey and found he is from Dhajey and has come here for blood sugar test. Dhajey is like 40 Kms away from Darjeeling town, and this poor old man had to come all the way here, just to get his blood sugar tested. I simply couldn’t believe the everyday struggle our people have to live through.
And as told, I saw the group of 5 patients was taken in at once to that room. I waited for my (our) turn and it did come much earlier than I was expecting. We the group of 5 entered, 3 medical attendants were inside, 1 was doctor and other 2 lady staff (could be nurses). We were told to sit in a long stool. First one (from their side) in the row was called. Within a minute that patient was out – Of course, the doctor finished with him, 2nd patient too was out of room in the next minute. I was in third and went forward near to the doctor when my turn came.

Me: “Yaha” – while showing where I am having trouble

He forwarded that paper to one of the lady staffs; she wrote something in another paper and told me to get those medicines from room 22. I thanked them and came out.

That’s it. In a minute I was out of that room. The doctor barely touched me. Maybe he is Experienced enough, or, as I said earlier, he (they) need to cover the hundreds of patients within a limited span of time. Maybe that is the best they can offer. While coming out I saw the crowd and thought to myself, No, we cannot blame the doctors. If they are to examine each of those patients properly it would take them week/s.

So whom to blame??
The Rant
So who is to be blamed? Who is responsible for this mess? Hospital administration? Or so-called Developmentkaari local leaders? Or so-called Development ki Devi who keep landing again and again just to self-boast of work that is never done? Or we as a society too responsible for this?
I know this experience of mine will be related by many, some with past experiences and some with future. Many may find it like making “Mountain of a molehill”. But I need to, even if it is so.
Dear editors, I am not an expert on these things but just as a layman, I would like to ask few questions to concern authorities and people here with SOME SUGGESTIONS:

I may be making a mountain of a molehill but just look around you… moles have made or are making huge mountains of tall claims of development. Just open your eyes and see, it’s not just about a particular medical facility, but each and every issue we are related to.
Please do ask, who is responsible.
डाडु पनिउ
My friends tell me that Siliguri sub-divisional hospital has more doctors, more staff, and more facilities than Darjeeling District Hospital. This made me realize that the colonialists will never do anything better for us – they come, they take, they go. They are here to take and not to give. A state that cannot provide us with basic health facilities promises to usher in development in our region, I guess only the delusionals would believe it.
Reflecting on this made me realize that until and unless we get डाडु पनिउ (statehood of our own) in our own hand, we won’t be able to serve ourselves as per our need, and our wants.