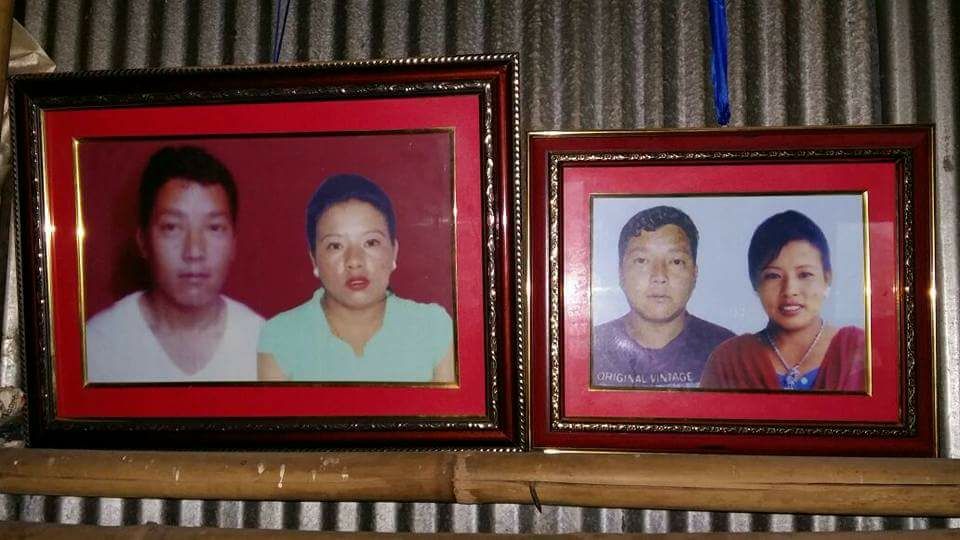 Yesterday, I visited a martyr’s house. It was in a place called Magarjung tea estate (T.E.), which is 33 km from Darjeeling and 1,500 km from where I live – Delhi. I wasn’t told where we were going. I thought we were going on a road trip. And a road trip it was: from Darjeeling to Sukhiapokhri, past Chamong T.E. and down Tarzum to a sleepy village with a few orange trees overlooking a gurgling brook. But that’s about all the beauty one will find here. The double-storey house didn’t have much to boast about. A low doorway led into a single, mud-plastered room. A bed, an alter, and a cushioned bench with a wooden backrest crowded the dingy room. What stood out though was a recently-framed photograph of a man, a silk khada framing his young face. His name is Ashish Tamang.

I won’t be surprised if the name doesn’t ring a bell. Public memory is short.

Unfortunately, time has stood still for his aged parents. Why wouldn’t it? They’ve not only lost a son but their moral and financial support. Retired and jobless, the father talks about a dismal future without his son. Deep lines run across his features, probably deepened more by the prospect of spending his old age in hopelessness, despair, and abject penury. The mother doesn’t speak much, and understandably so.

We call for the wife. She is working in the tea gardens – pruning tea bushes, and but comes home complaining about not getting time off from work every day. Apparently, some officers from Block Development Office had come, asking for her to submit her husband’s death certificate. She wanted to know why, but they didn’t tell her, ‘so I declined’, she told us.

She lives on the floor below where Ashish’s parents live. We take off our shoes before setting our feet on the clay-plastered bare floor. Here too, an alter, a bed and a single bench fill the room. Tin walls encase the single room, adorned with a row of framed certificates featuring her husband’s passport-size photograph – certificates given by various political outfits. And conveniently forgotten, no doubt.

We ask her how she is doing. Life has to go on, she philosophizes. After all, she has two school-going children: a daughter going on to class 9 and a boy who cleared his 11th standard but is seriously considering dropping out and lending a hand to his mother. “As long as I can walk an hour and a half to the tea garden and pluck leaves, I want my children to study,” she says. How are you managing, do you receive any support, we ask. She shakes her head to indicate ‘no.’ She picks up a knapsack and shows us where the bullet exited, splintering the metal support inside the strap. “I washed the blood off with a lot of difficulties,” she says. That must have been a tough, heart-breaking task. But life has been tougher – living in constant fear, being picked up from her workplace at odd hours, interrogated, threatened, bribed, cajoled… She comes across as a hardy, but a surprisingly sharp lady. She tells us she has successfully thwarted all attempts to put compensatory money into her hands – through all of the aforementioned methods. I marvel at her fortitude. A lesser mortal in her place would have buckled.

A local NGO had come by a few days back and offered to help support her daughter’s education. She gracefully accepted the help on the condition that she would provide them with bills. The integrity of the highest order and I look at her with respect. My friend who represents Darjeeling Together initiative offers to support her son on behalf of the group so that he completes his higher secondary education. (The boy has already been to a recruitment camp at Bengdubi, albeit without success). She accepts graciously, not bothering to count what has been placed in her weather-beaten hands.

As we drive back in the evening, a thick fog envelops the road through Sukhiapokhri. The same fog, I realize, was upon those of us who sat far away from ‘Ground Zero’ and waged useless war with those who believed in continuing with the strife – even if it meant following a leader who was underground – just so to maintain the momentum.

Keyboards warriors and armchair critics, it is time to lift the veil of fog.

The Gorkhaland Movement Of June 2017: A Darjeeling Perspective