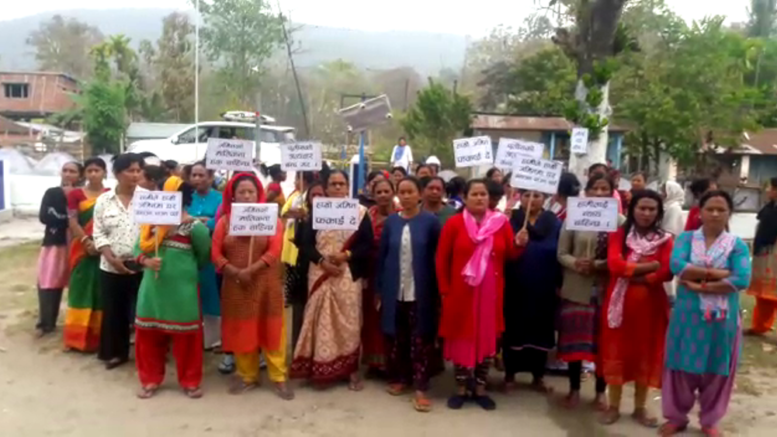 
Garidhura a small hamlet which acts as the gateway to Mirik and Kurseong on the Pankhabari road is rife with tension these days. Local residents are out holding protest marches against the police, whom they accuse of “land grabbing.’

According to the locals, in 1995 a local Mr. CB Chettri had donated 6 cottha land for a police out-post to be built. But gradually, the police have usurped land that the locals have been tilling for generations, and build and expanded their quarters.

Locals allege that for the past couple of years the administration and police have been harassing them. “Whenever we try to construct our homes, police and administration demand to see land documents and prevent construction, but they themselves are expanding their quarters on lands our forefathers have tilled on, seems like they don’t need any papers” says a miffed local.

The locals have alleged that not only land, Garidhura police have also usurped an under construction home that belongs to Kedar Chettri, and have transformed it into police quarters. One of the locals added, “Those in authority are misusing their powers. They ill treat the locals, they talk in abusive and threatening way, and the land that has been with local families for generations, where we cultivate are being snatched from us…”

The locals have informed us that, if the administration continues to harass them, they will go on a hunger strike, and submit all the government issued documents including PAN Card, Aadhar Card, Voters ID to the police, and boycott the upcoming Loksabha elections.

“Those who have sworn to defend the public are themselves indulging in gunda-gardi like this, and usurping our land… where do we turn to? The Central Government needs to intervene, because we are feeling insecure, we need justice and only the Central Government can give us that.”