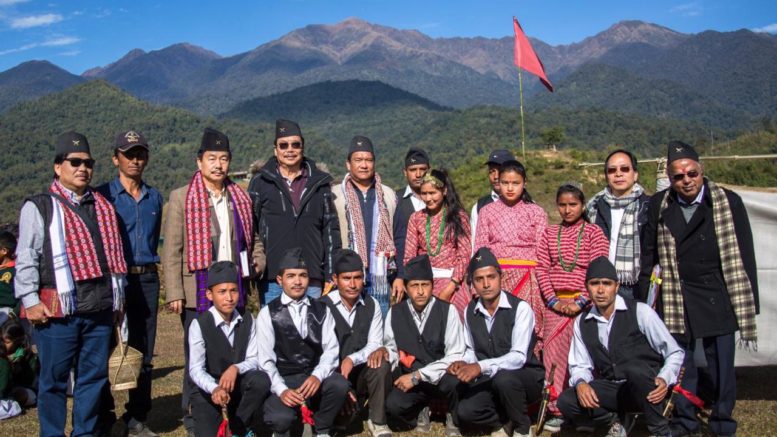 
Over the past few days, at least three people have been killed during violent protests over granting PRC to six non-Arunachal Pradesh communities living in Namsai and Changlang districts — Deoris, Sonowal-Kacharis, Morans, Adivasis, Mishings, and the Gorkhas living in Vijaynagar. The PRC would have entitled land rights, benefits and education support for these communities who have been settled for decades. However, alleging “large-scale demographic invasion of outsiders with the new entitlements under PRC,” other tribes launched a state-wide protest, even burning down the house of the state’s Deputy Chief Minister.

Succumbing to pressure from the protestors, the state government under BJP’s Pema Khandu has decided to drop all discussions on extending permanent resident certificates (PRCs) in the near future. The demand for issuing PRC and opposition to it by the powerful All Arunachal Pradesh Students’ Union (AAPSU) is not new. The politics over the PRC issue is also not new as well.

In 2013, Chief Minister Nabam Tuki during his last visit to the Vijaynagar valley prior to state assembly elections promised consideration of the long-pending issue and even issued Residency Certificates (RCs) to about 20 senior citizens. Pema Khandu, the current Chief Minister on his recent visit also announced that the people living there would soon receive a permanent solution as a New Year gift to the people.

It is indeed embarrassing for the BJP government to make such a sharp U-turn fearing political backlash by the opposition who have been demanding the resignation of the Chief Minister and Union Home Minister Kiren Rijiju, who is also from the state.

Although the government set up a joint high power committee (JHPC) formed to look into the intricacies and assess local anxieties, AAPSU alleges that the committee was overriding ground reports. With both the general elections and state assembly elections coming soon, the PRC issue is once again being used to gain political mileage and consolidate votes.

As is the norm, the ruling BJP government blamed the opposition Congress for inflaming passion. However, the fact remains that brutality of the protest and the scale of street rampage has confused everyone in the state, which has never witnessed such extreme protests. Only time will tell who gains the maximum political mileage out of the situation.

The Gorkha connection to Vijaynagar

The beautiful valley of Vijaynagar is home to Assam Rifles ex-servicemen (mostly Gorkha) and Yobin people, and who were settled in the region in the early 1960s, during the Indo-Chinese War. The valley is surrounded on three sides by Myanmar and the other side is flanked by the large expanse of the thick forest of Namdapha National Park. The closest Indian town is Miao, 157 km away and a 7 days trek while the closest Myanmarese town is Putao at 40 km. The road connectivity is almost negligible but the village has an airport which is used for emergency situations or sometime to drop food supplies to the region.

Since Independence, this territory has been administered by the Nehru-Elwin approach of ‘Least Intervention’ with NEFA serving as Guide Book for all policy matters. The foreword of NEFA begins with Nehru’s famous statement “Tribal rights in land and forest should be respected…. Some technical persons from outside, no doubt, is needed. But we should avoid introducing too many outsiders into tribal territory”.

In 1964, about 200 families of Assam Rifles mostly from the General Duty rank were settled in this hostile and inaccessible valley. The valley is grouped into 9 villages of Daragaon, Ramnagar, Phaperbari, Gairigaon, Chidudi (Shantinagar), Mazgaon, Top Hill, Buddha Mandir and Two Hut.

As per the All Settlers Welfare Association website, the settlement process continued till 1970-71, followed by the demarcation of Indo-Myanmar International Border in 1971-72 in this sector. Until 1972 settlers could not move out from Vijaynagar without escort and after the border demarcation, no further settlements were made in the area or elsewhere in Arunachal. It must be noted that if India had not made planned settlements and claimed stake on the region of the unoccupied territory, it was certain that Myanmar would have made their claim on the area as a contiguous territory of Kachin State.

“We did not come here by chance,” says Bhumi Upadhyaya, a local Gorkha whose family was one of the early settlers brought into the valley. “Before the wars, this valley was empty and barren. Our fathers and grandfathers were sent here by the government to stake a claim in this region for India. Many of them were forced to migrate to this god-forsaken land, some under voluntary retirement, so they could make this unclaimed land a part of India.” Bhumi who is now working in Mumbai talks of the hardship they face for every little official work to be done. “We are unable to apply for passports, jobs, or even get any support for education. I myself had to leave the village and stay far away right after completing after my Class Nine in the village. Like me, many youngsters leave the place because there is no security here, and only humiliation and about everything – home, jobs, education, and sometimes even life.”

That settlement of Gorkhas along this international region guaranteed security against external threats for India. For many years, they worked hard under extreme conditions to begin a new life, hoping that the government will stand by its promise to provide them settlements, at par with the rest of Indians. Despite having been recognized as citizens and accorded voting rights, the Gorkhas of Vijaynagar are still forced to prove their identity, time and again. “We are citizens of Vijaynagar, India, but can you imagine a citizen with folded hands being forced to produce an identity card, voter IDs, or ration cards at every police check post. These days, they don’t even care for voter IDs and ration cards and they seemed to have made up their mind to label us outsiders. It is humiliating and astonishing,” says a senior Gorkha leader on anonymity, fearing vendetta.

Highlighting the historical background of Gorkha settlement at Vijaynagar, the AWSA website states “Some of the Jawans whose service tenure was not completed for a pension benefit, too were sent on the tiff of assurances. They were given to understand that their remaining period would be suffixed from their stay in the valley, thereby taken into full consideration for a pension. However, they largely remained deceived and forced to struggle in the valley without a pension. It is worth mentioning that no prudent man chooses to sacrifice his existing avocation, a prospect in service and pension for the sake of 11 acres of land (as provided to settlers) that too putting life at stake in the extremely inaccessible remote border. This speaks volume about how the settlers were allured and entrapped for the reason of national security of colonizing the area and justifying India’s claim over it.”

There is no doubt that the Gorkhas settled in Vijaynagar were sent, sometimes forcefully, to the region by the government to safeguard India’s interest in the wake of the Chinese invasion of 1962. However, today, with a flourishing economy and a better military system, the government has perhaps started to feel that the citizens of Vijaynagar are disposable. In the political maze that is being woven around this international border area, the Gorkha settlers stand to lose the most. With the settlement lease coming to an end in 2020, the onus is upon the government to show how much it honors the sacrifices of its army and stands true to its commitment.

Or perhaps, the obligation of the government for the sacrifice made for the nation is limited to building War memorials, statues, naming streets, and high-rise buildings. Swayed by the passionate calls of their political masters, perhaps the people themselves have chosen to live in manufactured lies and ignore genuine sacrifices made by their forefathers to build a better society for them to live.

Gorkhas of Vijaynagar deserve our nation’s gratitude, support and solidarity. We hope the administration will do what is right, instead of succumbing to political pressures.