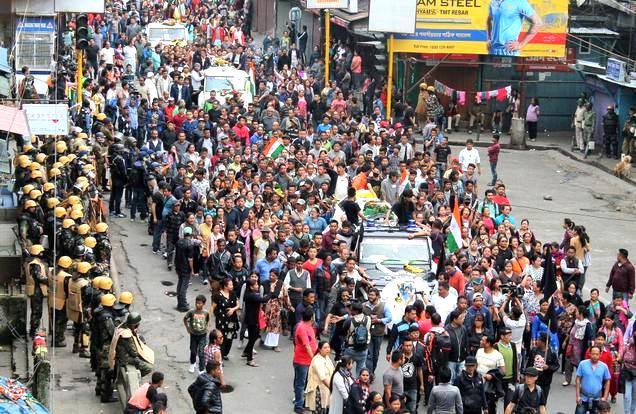 “Very good. Take courage. Don’t become just emotional. Be practical and stay on ground. Emotional decision will not lead you anywhere” – this is a sermon (‘comment’ is the word) made by one of the prominent figure ( at least they claim to be), who had once headed one of the most prominent parisangh of Bhartiya Gorkha.

This sermon was posted as a comment in a Facebook post by a page which has been waking-up-people-of-Darjeeling to believe in their propaganda. The news post was posted with the headline as ““Government employees seems to have responded well to Mamata Banerjee’s “one month advance salary” scheme””. To simplify, sermon was not to be ‘emotional fools’ and to stop supporting the ongoing strike in favour of the Gorkhaland demand.

But this is not a one off such incidence. I have seen highly versed English writing folks preaching valuable sermons on social medias with similar intonation – “Don’t be emotional fools”, “what kind of foolish society are we living in?”

It’s past 101 days of ongoing strike in Gorkhaland region and we see no ending of this, and with those sermons falling into my eyes and ears compelled me to ponder over some thoughts.

Are we really emotional fools?? This has been striking me since the past 3 days, and finally the epiphany hit me today – Yes, we are EMOTIONAL FOOLS.

What kind of foolish society are we to oppose government’s policy to teach us a new language? Wasn’t the Honorable Govt of Bengal simply trying to help us to learn Bengali language? In fact, we already have ration cards in Bengali, sign boards and banners in Bengali, Hospital bills in Bengali, Babus and Sahabs shouting in Bengali. Way the Bengal government was/is going, very soon we will have no use of our Nepali language. So why not learn Bengali? We should not have acted EMOTIONAL FOOLS to oppose it. What is wrong in accepting that IMPOSTION? At the most, we will lose our language and then our identity, which is already in the midst of oblivion anyway.

SEE ALSO:  Dear Sikkim – We Are Indebted To You
Powered by Inline Related Posts

Just look at our neighbours – the Rajbongsis, the Santhals, the Oroans, the Murmu, the Toto, the Mech. Like all of them, had we accepted Bengali language imposition, our problem of identity crisis would also have been solved a few decades ago… through identity replacement. We will all have become Bengali. But no, we are “stupid society” of emotional fools who keep protesting against such good intentions of the government, in vain attempt at retaining our eroding identity.

And look at THE EDUCATION… the most important tool of survival for our coming generations. What kind of EMOTIONAL FOOLS we are to support strike and shut down schools. Why are we playing with their future?

THE FUTURE – where they will complete their high schools or higher secondary and move out of the region in search of jobs, because that is all what their Rs 132 per day earning wala kaman ko Coolie parents can afford. The future – where a illiterate tea labour mother ask her kids, if they have more to study with every board exams clearance. The future – where you start asking “bharti try gareko chainas?” as soon as they reach grade 8 and, if you made it to the army, good, if not , carpentry, mason, labouring jobs all available there. The future – where you invest all hard earnings in their bachelor degrees and end up sending them to Gulf to work as security guards and salesman. The future – where after investing all your money you ended up investing more to buy a maruti van to make your bachelor / masters degree holder son a taxi driver. The future – where (if their parents are well earning then) you send your kids to Bangalore, invest your hard earnings, make her a computer engineer, bring her back home and invest more to help her in opening a game station. The future – where you can expect your kid to get government job only because you are doing one . The future – that will barely be lived by 2% as envisioned by the great intellects.

We are such emotional fools to hope and dream to change such a bright future.

Look how people are suffering. The poor tea garden workers. What kind of the EMOTIONAL FOOLS we are to support strike and make them suffer.

Our society, our community if full of these kinds of EMOTIONAL FOOLS.

Just go around and see how many emotional fools we have in our society who dream about identity, own home.

The emotional fools who have a DREAM, a HOPE, for which they are ready to FIGHT, ready to SUFFER, ready to ACHIEVE.