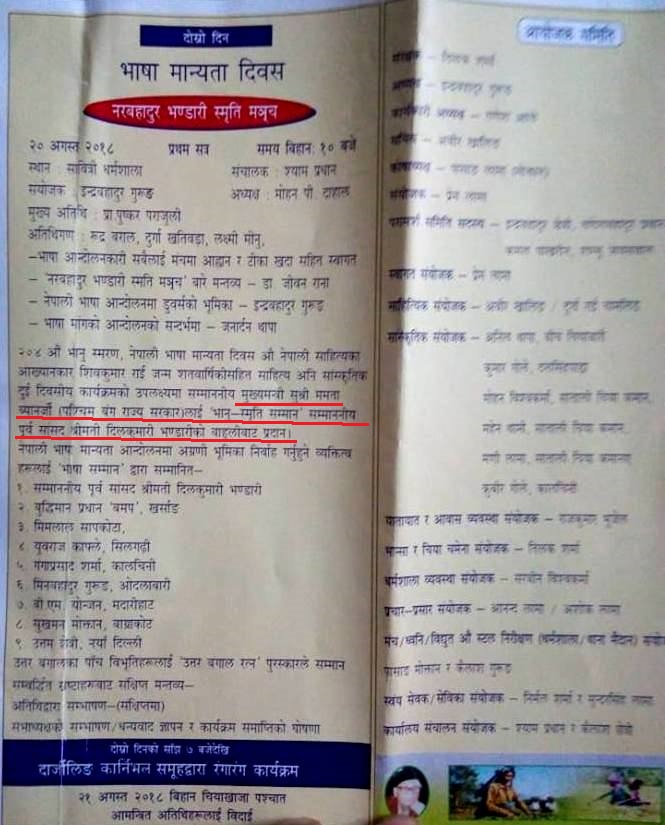 Program brochure highlights those who are to be felicitated with Mamata

A newly formed body, Kalchini Nagarik Samaj has embarked on a noble pursuit, to honour and celebrate one of the most fervent champions of Nepali language and literature, the Honourable Ms.Mamata Banerjee, Chief Minister of West Bengal.
As we are all aware, Ms.Mamata Banerjee has singlehandedly undertaken a crusade to protect, conserve and promote the use of Nepali language not only in the hills but across West Bengal and possibly India and the world and the universe.
Her love for the Nepali language, culture and traditions are made apparent in that she has actively promoted the formation of 15 different caste-based development boards so that all the sub-dialects of the Nepali languages are protected. So what if most of the sign-boards and government forms in the hills are printed in Bengali, her government has compensated for it by requiring people to write applications in their native dialects – Newari, Limbu etc – while applying for OBC, SC, ST certificates – this way more of our people are now connecting to their long-forgotten roots.
Last year her administration had filed FIRs against academics and litterateur for speaking out against the imposition of Bengali, but this year she awarded one of those Dr. Jiwan Namdung with Giri Purashkar and a cheque of Rs 1 Lakh. Who else does that? Thanks to her absolute kindness and grace that only 13 Gorkhas were laid to eternal rest last year as they protested against the imposition of Bengali language in schools. Had it been some other politician perhaps the death count could have gone up to 130 or even 13000 – who knows, but due credit must be given to Mamata Banerjee’s love for the Nepali language and her untiring attempts at conserving the same, that only 13 were killed. If nothing else, she rightfully deserves an award for those deaths alone.
The program brochure presents names of those who are associated with the organizing of this event, and also those who they seek to honour along with Mamata Banerjee. All are most deserving of such an honour, alongside her.
So here are congratulations to those being honoured and especially the organizers for finally appreciating the hard work put in by these very hard working individuals towards the Nepali language and upliftment of the Gorkha community as a whole. Along with mamata, all of them are deserving of our collective accolades and gratitude.
…….
Please Note: Following the publication of this incredible news by Khabar Magazine, Ms Dil Kumari Bhandari has shared her “deep sense of betrayal and shock.”

Be the first to comment on "MOST DESERVING: Mamata to be Felicitated With “Bhanu Smriti Samman”"