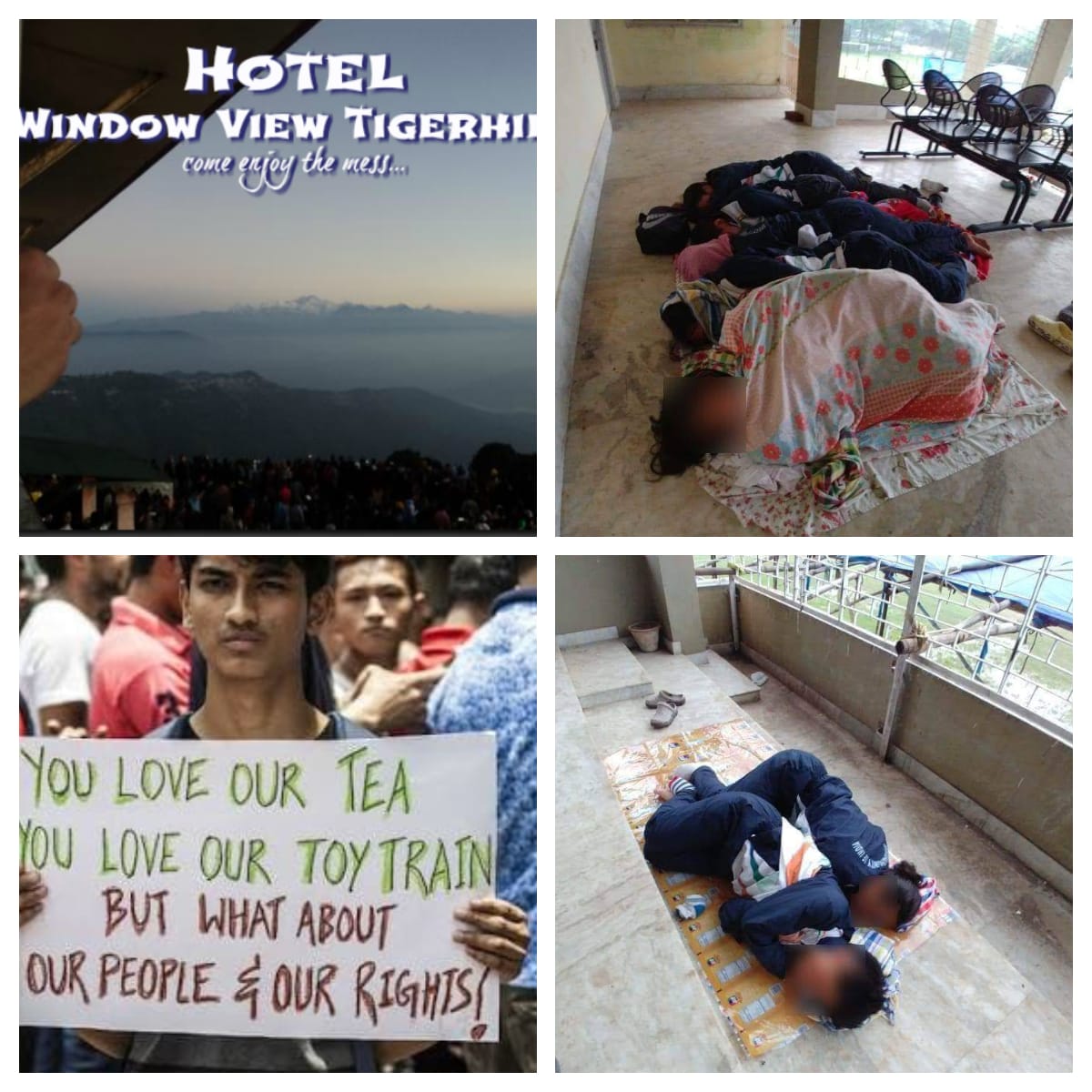 Silence of the Lambs

One ‘interesting’ thing about my friends from Darjeeling is the way they can come up with an excuse for everything. Every discussion about ‘back home’ seems to boil down to one person accusing the other of all the wrong that is happening there. The best excuse is always left for the last when all argument loses its rationale – “hundeina hau bhai hundeina, jaba samma aafnu rajya huundeina, kei hundeina haamro.” The discussion ends there.

But what I am discussing is not the big politics of the land, but the real issues that people suffer every day. I am only talking about the hospital issues, rural education, and environmental impact of unplanned development. These are everyday issues that affect everyone living in the Darjeeling hills and its people and have nothing to do with the politics of any individual or party. Today, most people fear to speak because the moment you open your mouth or are seen with certain people, there is a rival camp that passes a judgement on your political affiliation. This must stop and it is high time that we stop seeing every issue through the lens of politics, parties, and leaders.

Both, the leaders and the public must learn to introspect and separate socio-economic issues from the larger political interest because some situations are urgent. Leaders must stop being such narcissists to think that every protest and issue being raised is against them and their politics. The public also must realize that not everything is political and issues relating to education, hospitals, or environment protection are above any political affiliations and needs urgent intervention.

The pictures of the painful treatment of St. Teresa school girls’ football team during their Subroto Cup district matches held in Bankura. I am not much concerned about the allegation of biased refereeing, but the pictures of the girls sleeping on the floor covered under a thin bedsheet were gut-wrenching. Following an outrage by TheDC and by a few folks on Twitter and social media, a few other national news portals like The Quint and The Logical Indian covered the news. Let me not even get into the gender sensitivities of the issue and what could have gone wrong, but leave it for the intelligent readers to understand the matter.

While the lackadaisical attitude of the tournament organizers is highly condemnable, what worries me more is the silence of the administrators, councils, boards, and other powerful bodies of Darjeeling Hills. In an ideal world, there would be protest letters submitted to the organizers seeking clarity on the matter. But, the silence of the Hills administration is only empowering the perpetrators to continue their mistreatment of people from the Hills. In all such cases of discrimination, there is NO one to speak for the children and people of the Hills, not even a responsible citizens forum. A bunch of people shouting on social media might get the attention of national media, but unless the people, administration, and leaders own up the issue, there will be no change in the attitude of the ‘others’.

Tea Garden workers seeking ‘Minimum Wage’ attempted to march to the Uttarkanya to put forward their grievances, but were stopped midway. The issue of ‘Minimum Wage’ is not new and the issue has always been exploited by different leaders and parties during every election. However, the situation remains the same as the workers still fighting for the dignity of their labor.

The latest protest is significant in the view that Stock Exchange Board of India (SEBI) filed a case against KD Singh, the businessman-turned-politician against his alleged plan to flee India. As per the court filings, KD Singh was accused of transferring 100 million to the US, raising speculations that he was attempting to flee the country and even had started the process of purchasing Citizenship of some European country. It may be mentioned here that KD Singh’s group Alchemist owns three tea-gardens in Darjeeling Hills – Dhotrey, Peshok and Milling-Toongsong. The workers in these gardens have not been paid since 2015 and there have been reports of widespread poverty and starvation in these gardens.

In all honesty, can any of us be willing to work for a mere Rs 150 per day for an 8-hour back-breaking labor? If you think no, then we must be concerned about the issues because these workers are from Darjeeling.

And lastly, but certainly not the least important matter was the news that the Government of Bengals plans of constructing new resorts and tourism spots. A report says about 10 different tourist hubs across Darjeeling Hills including Tiger Hills and the holy Sinchel dham area. The bigger question here is does Darjeeling need more constructions, or can it even hold any more ecological transgressions? Isn’t it more sensible that existing infrastructure be managed more efficiently rather than burdening the Hills with new constructions?

Tourism in Darjeeling is famous for its natural beauty, and not for the constructions and resorts. To think that only a brick-and-mortar structure is the sign of development is almost foolish at this age. When the customers and travellers are heading towards Eco-tourism, Rural homestays and more responsible tourism, what good would build 10 cottages do in attracting tourists. Any sensible traveller will avoid a concrete jungle, and we will end up having only the chaotic and irresponsible tourists in our place. The new generation of tourists is seeking for the most authentic and local experience of their travels. It is not about staying in the best hotels.

Be the first to comment on "SILENCE OF THE LAMBS: The Deafening Silence of Hill Citizens"