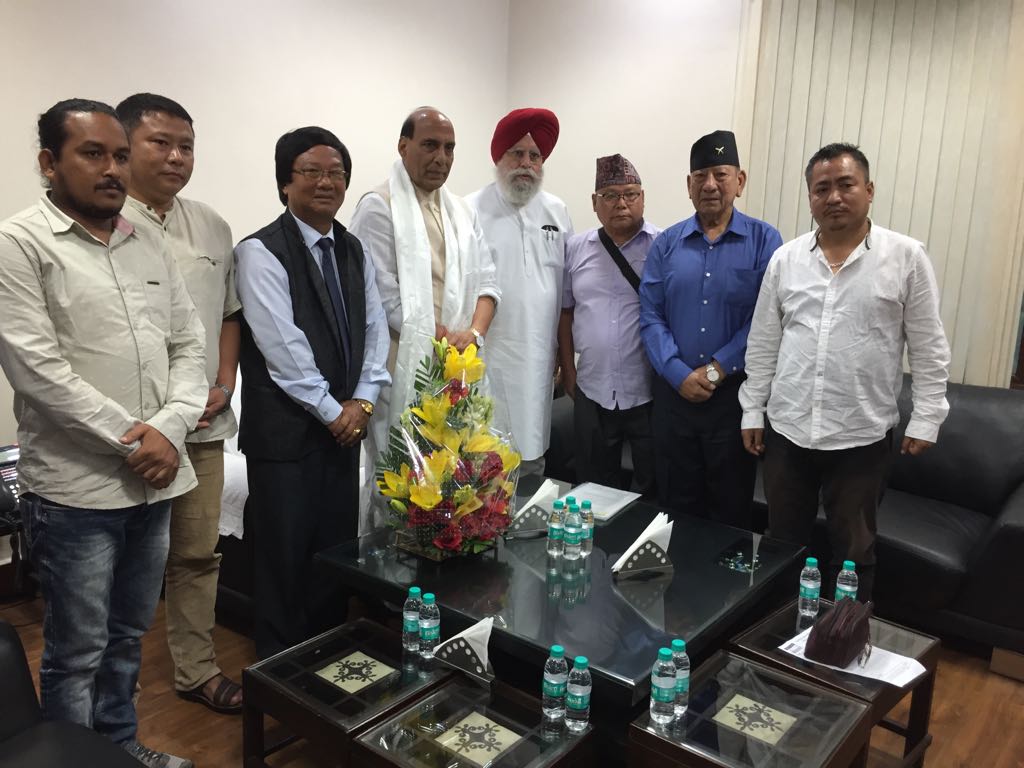 Keeping up with how they have dealt with all issues concerning Darjeeling, the Central Ministers once again asked for a new date to get the balls rolling on – ST demand for remaining Gorkha communities, and Tripartite talks that had been promised in September of 2017.
Yesterday a delegation of GJM leaders from Bimal Gurung faction, led by Darjeeling MP SS Ahluwalia met with Union Minister for Tribal Affairs Jual Oram to remind him of the Gorkha ST issue which has been promised since 2016, yet nothing has been done. Mr. Oram like always promised action in another six weeks.
The same 6 member delegation also called on Union Home Minister Shri Rajnath Singh in New Delhi on Tuesday.
The delegation apprised him about the long pending demands of 11 Gorkha communities living in West Bengal, Sikkim and other northeastern states for granting of the Scheduled Tribe status.
Shri Ahluwalia also requested the Home Minister to immediately convene an official level meeting, as promised last year, to consider the pending issues and address the grievances of people in Darjeeling and neighbouring regions.
Shri Ahluwalia recalled that the agitating members of the GJM had withdrawn their 104 day long agitation on 26th September,2017, following an appeal from the hon’ble Home Minister.
Shri Ahluwalia informed the hon’ble Home Minister that there was an urgent need to look into the long pending demands of the local people, who faced acute hardship during the last year’s agitation.
The Home Minister ONCE AGAIN ASSURED the delegation that a meeting shall be convened soon. It has been a year since he promised this meeting.
Reacting to the development, Binay Tamang – the current BoA Chairman for GTA issued a press release, calling those who had gone as attended the meeting as being “discarded leaders of Gorkha Jan Mukti Morha” [sic]

The press release produced in its entirety below:

“In the leadership of M.P, S.S Ahluwalia, the former, discarded leaders of Gorkha Jan Mukti Morha have been trying to raise the demand of tribal status of 11 tribal communities residing in the hills.Appeasing the strike that lasted for 105 days we have been trying to stabilize the political scenario and are trying to find solutions to most of the issues related to the hills. Similarly, the issue of ‘Tribal Status’ has progressed rapidly after the meetings of the Board of Administration.

However, at our initiative, the Chief Minister Mamta Banerjee had also written to the Tribal Minster, Jual Oram on 14th of February 2018 and in the initiative of GTA all 11 tribal communities have met the concerned ministers and have submitted memorandum to various other ministers.

The Chief Minister of Sikkim too has been supporting this issue as we have maintained a cordial relationship with him, and in regard to this, our demand and issue has progressed positively.

Now, this progress is letting Bimal Gurung, and other rejected leaders to gain sympathy from the people of the hills. The former leaders did not work on the ground when they had time but now they have been trying to use this progress as their vote-stunt for the election that is going to be held next year.

The memorandum alone won’t solve all problems, if it could, why didn’t the issue of central university, tribal issues, and statehood of Gorkhaland get solved?

However, with new thoughts and new vision, many positive works has been going on to which the public will be able to enjoy the benefits prior to the Lok Sabha election, next year.

Railways to Report to UNESCO Over Darjeeling Heritage Railway Losses