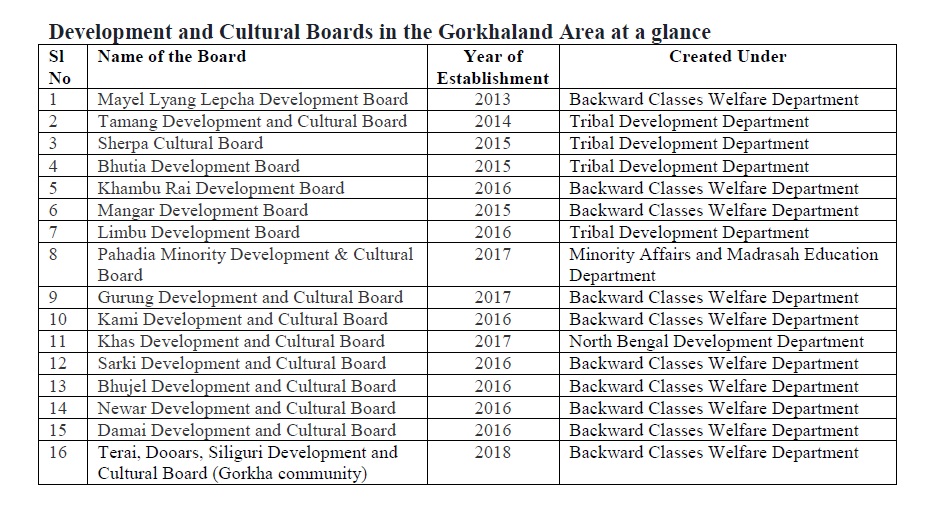 "Boards Boards Everywhere - Not a development to be seen"

Mamata Banerjee, somehow, has been able to evolve a relatively unique, efficient and effective tool to progressively sideline more than a century old political aspirations of the Gorkhas for a separate state of their own through the establishment of a series of Boards commonly called ‘Development and Cultural Board’ designed on ethnic and communal lines.

The Concept of Development Board and Gorkha Temptation

From amongst the larger Gorkha community, Limbu and Tamang were the first groups to aspire for a development board of their own. Gorkhas, particularly younger lots, saw money flowing through these boards and could not resist their temptation.  Soon after, almost all sub-Gorkha groups started to make noise, like seasonal insects, for the ‘boards’ of their own, forgetting and more pertinently disregarding the larger collective Gorkha aspiration of separate state.

Perfect Recipe to dislocate Gorkha Unity and their Collective Voice

Mamata Banerjee immediately understood and internalized that the very idea and concept of ‘Board’ was the perfect recipe to tackle the dejected Gorkhas and a critical card of the moment to dislocate and dismantle the bigger political aspiration of separate Gorkhaland state. Consequently, she took full advantage of the situation.

Eventually, by the end of 2017, 15 odd ‘Development and Cultural Boards’ were formed for the Lepcha, Bhutia and Gorkha Communities of the proposed Gorkhaland region. Not surprisingly, Government of West Bengal yet again notified another development board called ‘The West Bengal Terai, Dooars, Siliguri Development and Cultural Board (Gorkha community)’ on August 13, 2018 making a total of 16 development boards. While the first 15 boards have been formed on communal line, the last one is based on geography. “Boards Boards Everywhere – Not a development to be seen”

Lastly, but not the least, West Bengal’s project of ‘Development and Cultural Board’ in Darjeeling and Duars region is nothing but a populist approach to appease people on communal line. It will eventually fragment and divide the Gorkha society in the long run and will not address the fundamental issues for which Gorkhas have been collectively fighting for more than 110 years.

*Dr. Vimal Khawas is the Head of the Department, Peace and Conflict Studies, Sikkim Central University.

1 Comment on "Mamata, Development Boards, Darjeeling-Dooars and the Gorkhas: Apprehensions and Implications"