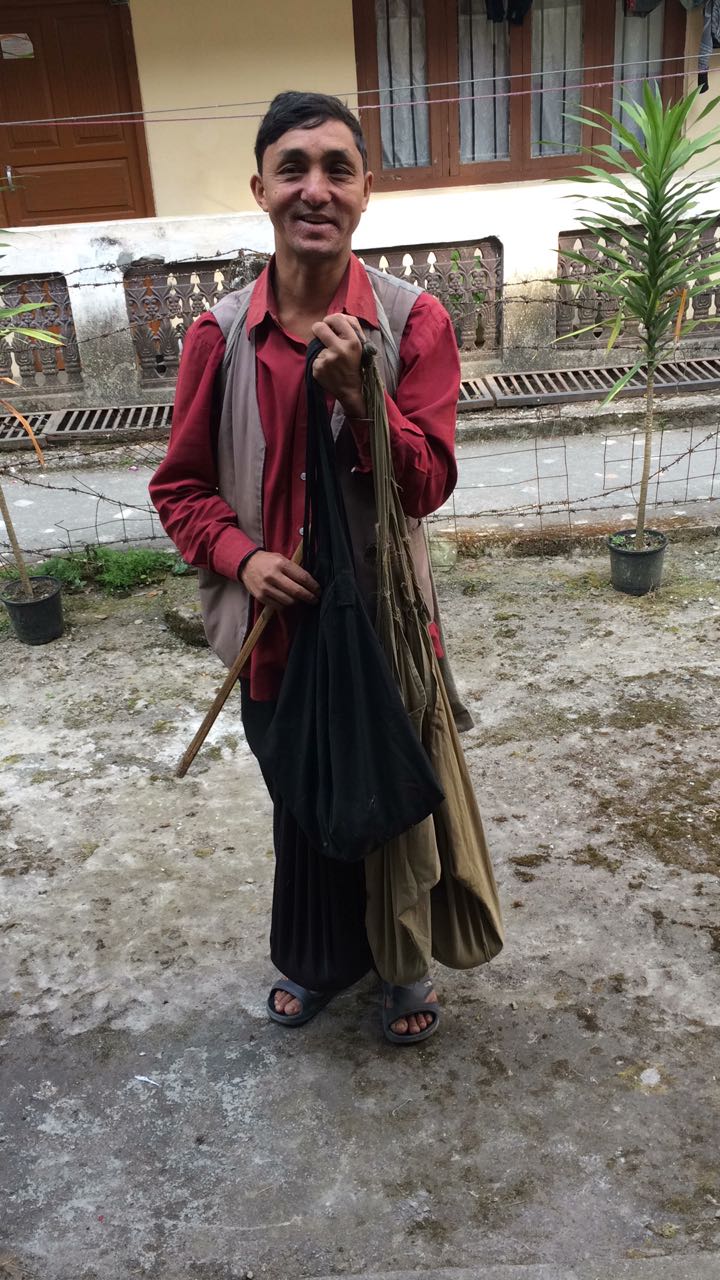 I, all of a sudden, awoke from my tired sleep on one of the autumn midnights. After completing a daylong field survey in a nearby tea garden, to enjoy deep lazy sleep was all I could be entitled with. However, an uncanny sound followed by high-pitched noisy bark of uncountable dogs in the vicinity forced me to come out of my utopian berth. Few seconds of careful listening and I made it. It was a Jogi performing his usual customary chore. That is that; it is not new to me. I have been hearing this uncanny sound followed by numerous indecipherable mantras during the midnights of a particular day of particular month since my childhood. I, however, never thought of exploring as to why Jogiperforms such a difficult job during the dark scary moonless nights, the meaning and significance of such performance etc.

At about 8 am in the morning before I was free of my morning chores, a voice Jai Goraknath greeted me. He was the same man who produced series of uncanny sounds in the midnight. He had come to collect the fruit of his wakeful service. I secretly made up my mind to explore the significance of his midnight venture and few other associated details. Our conversation enlightened me with some interesting ethno-cultural information of which I was debarred from, all these years.

Jogi-s or what people also locally address them, as Pheriwala-s across Darjeeling-Sikkim Hills and Nepal is one of the ethnic groups belonging to a larger Nepali/Nepalese community. They believe themselves to be the loyal disciples of Lord Shiva or what they also call Goraknath. They have a total of 64 bhairungs (sub-tribe) out of which only 12 bhairungs are entitled to be pheriwalas. Meaning thereby, only 12 sub-tribe of Jogi are culturally given to practice this customary duty. Therefore, all Pheriwalas are Jogis but not all Jogis are Pheriwalas.

It was Lord Shiva who sent them to this world, as Goraknath knew the world is featured with innumerable evil spirits. As the loyal disciples of Goraknath it is their duty to protect human beings from the evil spirits characterising the world. In this connection they set out for their rounds in the mid-night as it is believed that evil spirits are active during the period. They visit every household in a village or a particular region and blow Sankha Dhoni with the help of a horn of an animal locally called brat (an animal belonging to deer family). In the process they produce a series of uncanny sounds supported by spiritual mantras often hard to decipher by an ordinary soul. One Pheriwala visits one pre-demarcated village/region. There is no overlap in the performance i.e. no two pheriwalas perform in the same village in a same night. There are, however, cases when two pheriwalas perform collectively. In that, one of them would be a junior or a disciple who would be learning the lessons of pheri phuknu (blow) and the associated mantras from his senior or master.

Pheriwalas usually perform their age-old customary duty during chayit roughly corresponding the months of mid March – mid April and Kartik i.e. mid October- mid November. They believe evil spirits are most active during these two periods and as the ardent disciples of Goraknath they are bound to protect the human beings from their evil objective of negatively influencing the everyday human life.

They collect alms or what they also call it daan the very next morning from the individual households of the village/region where they perform. They do so for the nau grah santi (peace to the nine planets of the solar system) of the members of the households. They believe, they have the power to carry along with them all the planetary problems of human being inflicted upon by different locations of nine planets revolving around the solar system. They offer sacrifice to their Sankha Dhoni to keep their instrument active and effective for the cause. The sacrifice is usually offered during the Nepali/Nepalese calendar of asthami or noami.

Superstitious it may sound pheri phuknu is one of the important ethno-religio-spiritual attributes in force across both rural and urban spaces since time immemorial. Rustic hill folks often wonder as to why Pheriwala did not visit their houses if, by chance, a particular village or a region is left out during the period. It is strongly imbibed within the culture of Nepali speaking households across Darjeeling, Sikkim, and Nepal.

Further, Jogis also play a role of traditional ethno-spiritual faith healers. There are numerous instances when the people to heal their ailments have called them. Examples abound across the hills of Darjeeling and Sikkim where Jogis have cured paralysis, epilepsy and other forms of diseases.

Nevertheless, the present young generation Jogis and those that are yet to come may not be quite interested to carry forward this odd profession. Jogis themselves feel that they have been gradually deviating from their historico-cultural attribute over the period of time. Education and other associated postmodern forces have been playing important role in this connection. Truly, as the whole of human species is entangled in the process of development, Jogis/Pheriwalas cannot be an exception. Pheri Phuknu, apart from being a ritual, custom and tradition of Pheriwalas, is one of the prominent ethno-religious assets of the larger Nepali/Nepalese community. We must not lose this asset as we proceed ahead in the spectrum of development dynamics.