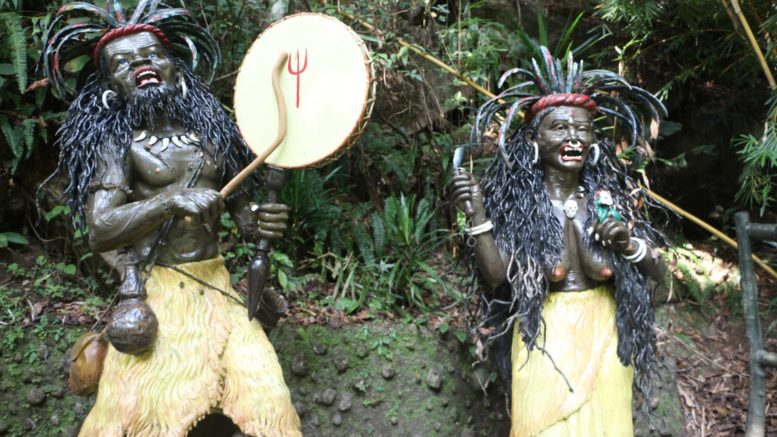 
What thoughts sent chills down the spine when you were a growing up in the mountains? Was it this unknown person blowing his ‘feri’(horn) in a certain pattern?, was it the hooting of laat-kosera(owl), or was it the sight of flying lights?

Almost everybody growing up would agree to one fact: It scared the shit out of us whenever one, suddenly! Got up in the middle of the night only to hear the “Jogi” blowing his horn. The humming would continue and the horn blow and suddenly stop! Only to eerily find the chanting and humming just next to your bed with rhythmic “puu-puuu-puddru-puu” and the incomprehensible chants. I imagine your grandfather telling you that the “Jogi” played the sound from something called “kangling” which was brought from the ‘masaan-ghat’ and was made from the bones of a dead human!  With legs tightly folded against the chest one would borrow deep inside the ‘sirak’(quilt) and in the worst-case scenario would cuddle up next to “aama”. Didn’t you experience it?

The other phenomenon that made one gasp for breath with fear was the sound of the hooting “laat-kosera” the fear was partial because it hooted right in the middle of the night and partially because the mother would tell us there were two kinds of an owl, a witch owl and a good owl. And to make matters worse mother went outside leaving us alone to placate the godly owl by offering prayers? The fearful heart would always ask when the mother will come inside. And what if it was a bad owl?

SEE ALSO:  Kanchendzonga is like a Battle Gear and Armour for Sikkim
Powered by Inline Related Posts

Mountains are full of stories of the supernatural; stories about the unknown always began in the “angaan” (courtyard); where families assembled around the fire, lit by joining three trunks of tree stumps. Curious ears would concentrate on what the elders had to say. In the dark cold evening, the elderly spoke of “Ban-Jhakri” (Forest Dwelling Shaman) and how in a nearby village a child was kidnapped by him and taught the arts of the ‘dark’. The child returned only after becoming a proper “Jhakri” (witch doctor) himself and he could cure anybody and had the powers to throw “Baan” at anybody who would ridicule him.

Few feared the “Ban-Jhakri”, but the mention of his female counterpart “Ban-Jhakri-Ni” made everyone shiver with fear. ‘If she ever catches a child she will either eat him/her up or make a sacrifice’ the elderly would say. Although, they had the formula to avoid her too and would teach the children.  “Ban-Jhakri-Ni” ley khede bhanae, ukaloo na bhagnu, oraloo bhagnu” (Never run uphill always dash downhill). An innocent soul would ask why? After a slight hesitation came the crude answer “Ban-Jhakri-ni ko Dudh lamoo-lamoo huncha ukaloo khed-da ghati ma beri halcha, tara oraloo khed-da tyoo bhari bhayera affai ladcha” (her breasts are so huge that made it impossible for her to chase children downhill as it would make her tumbledown chasing). What logic the innocent soul thought and whenever one saw a prospective culprit, everybody would run downhill. Such was the innocence of childhood, huge breasts sounded logical.

There were lesser houses and commercial constructions when we were growing up, one could see mountains, valleys, “kholcha” and “jhoras” surrounded by trees and bamboo grooves. These places assumed significance for another fearful phenomenon, “Herr ta tya aitya-barrey bhir ma” Rakey Bhoot! (Look there goes the Rakey ghost) Gathering courage children would look at the sight: specks of tiny dotted glowing ghostly flying lights, bluish-golden, sometimes orange, shape-shifting and moving slowly uphill it would move, fear gripped when elders said it’s moving towards us! To hell with chemistry classes and methane gases, everybody dashed towards mother for the fear of getting eaten up.

Whenever one encountered a bunch of fire-flies while crossing a rivulet in the evening it scared the hell out of us, growing up, it was the “Rakey-Bhoot” coming to eat us up not a group of mating fireflies.

Throwing the scientific reasoning in the dustbin I would love to once more watch the spectacular phenomenon of a moving “Rakey-Bhoot” in this lifetime itself. My child and the current generation will never experience such a phenomenon in this concretized world and so will the oral and folk history die. Although most of the incidents are superstitious in nature they are a part of our dying rich oral folk-lore which needs documentation.

Kanchendzonga is like a Battle Gear and Armour for Sikkim