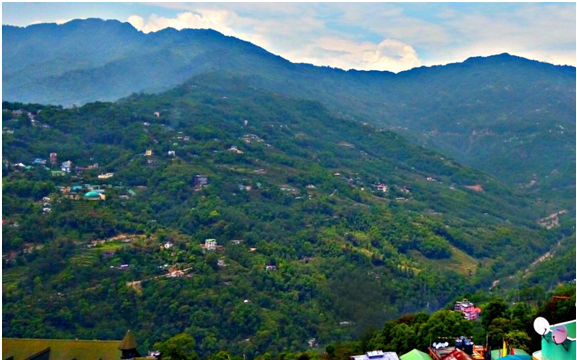 This article does not depict any literature review neither it has any scientific data analysis. It has but only the raw observation of a 50 years old respondent whom I was interviewing in Gangtok, the capital city of Sikkim to explore some of the traditional knowledge system in Disaster Risk Reduction. As soon as I began my questions regarding the traditional and modern farming methods and their advantages.

He stood up and showed me the other side of the hilly slope from his window and began to say. “Look at that hill slope and try to observe the land use system made by our elders. May be once that area would have been landslide prone zone but now it looks quite stable. Now look at the old traditional houses in different parts of that hilly slope. You will see presence of small forest, in between the forest you will see agricultural field and a small non vehicular roads connecting all the neighbours. Are you seeing how intelligently our elders have managed the mountain land if not then they would have cut down all the trees for agricultural propose. If you observe carefully then you will see that the agricultural field was always located in between the small patches of forest area and the bamboo plantation. Now just see below that hilly slope especially along the river side. You will see the presence of trees on both sides of the river banks. This is how they made the surrounding a productive zone as well as a resource recycling zone which ultimately made the land a self sufficient resource generation

Now if you observe in certain parts of that hilly slope you will see a little different land use pattern today. Some huge concrete buildings in the middle of the agricultural field have come up, one amusement park is also there and in between the production land vehicular roads construction can also be seen. We all know that in between the forest area there will always be a recharge zone for springs and I hope modern science knows better than me but still they have and are constructing roads in between the forest area.

Before modern technology arrived we used to have a different land use pattern. We usee to grow traditional varieties of different crops in our agricultural field and we also used to get other essential food items from the forest area itself. Springs were always located near or above our agricultural field and upper catchment of spring area was always surrounded by forest as a recharge zone. All the immediate requirement use to come from our traditional farming system and all the necessary items required for agriculture production was also use to come from our surrounding area. Therefore resource recycling use to happen within the area without any external inputs. Paddy, Kodo (Millet), Fapar (Buck wheat) and even Bhan Tarul (wild roots) everything was there for consumption. Food security was there and cashless system use to function during those days. For example we use to have “Parayli” and “Parma” system which means shared labour. When I helped you then you too would help me and this is how we use to do payment during early days. In fact we didn’t required any cash for doing agricultural production nor in building houses or nor in any other work. Local skilled labour was abundant and use to come from the neighbouring side.

Our elders used to keep all the traditional varieties of seeds and this had actually saved the whole system during those days. Therefore production system and land use system both were kept in safe hand. Now system has been altered. Production land has been bifurcated. Micro environment within the land system and the agro ecosystem within the larger land system have been broken down. Now we have abandoned all those kind of traditional agriculture system. People needs govt jobs today and literate employed people are busy in transforming village with the modern concrete structure. In fact the question “Who Wants to be a Farmer” is arising within the educated and younger generation folk. Today everyone needs vehicular roads till their door step and this is considered as development. Trade able product based approach has been born. So now we are in cash based agricultural system. Today we need everything more so that we can sell it in the market. Now we prefer to grow such crops which would fetch large cash and this has led to the introduction of external inputs in our land. During our elders time we never had external inputs inside our land. Whatever we had inside the land was used and recycled. But now you can see it clearly how modern technology is slowing transforming our aged old cash less agricultural system into cash based tradable economic system.

Today due to cash based approach we grow seeds given by external organization. Due to that we have lost traditional seeds and now we have become fully dependable in new modern seeds. Due to that local farmer still are not been able to predict their agricultural production because they don’t have vast knowledge about modern external seeds. What will happen in future if all the farmers become dependable in external seeds? What if seeds are not distributed later to the farmers? The distribution of modern seeds and functioning of cash based system have made the whole indigenous network system collapse. We are now in run for money. What major mistake we are doing today is that we are imposing the modern agriculture system inside the traditional agriculture system. Today we want everything inside that land so now sustainable productive land has been reduced and at the same time we are also not been able to understand the modern agricultural system correctly. Therefore surely we are in the rapid transforming stage of unpredictable future.”

(About the Author: Author is an ICSSR Doctoral Fellow, Department of Geography, Sikkim University and can be reached at raipribat86@gmail.com).