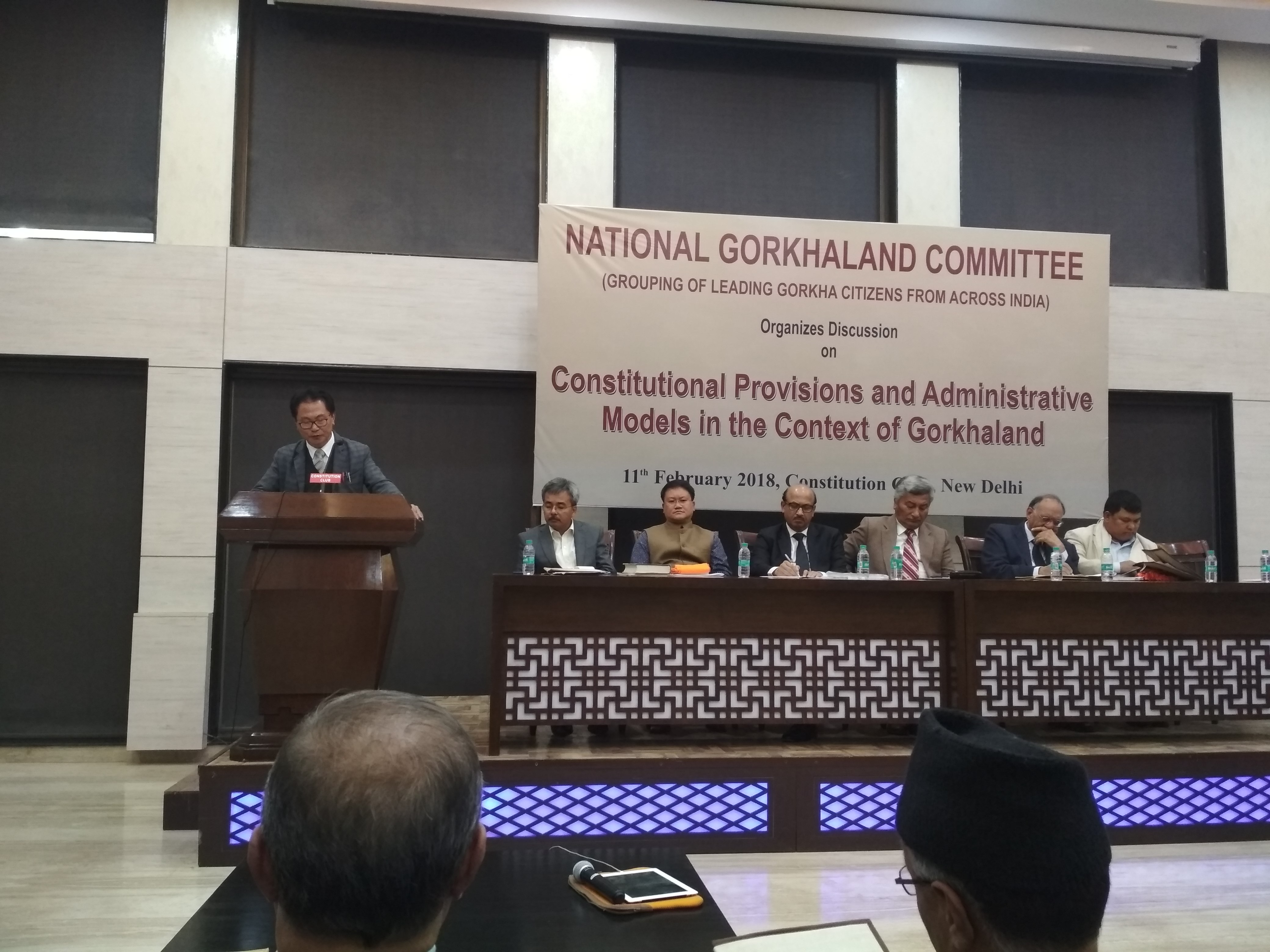 A few weeks ago, there was much hue and cry about a ‘discussion on constitutional provisions in the context of Gorkhaland’ organized by National Gorkhaland Committee (NGC) at the Constitution Club Hall, New Delhi. Since most of my knowledge about Sixth Schedule was based on self-research and hearsay, I was curious to attend and know more about it from the legal experts invited as resources for the discussion.

The gathering was picture perfect with representations of most Darjeeling-based political parties, senior Supreme Court lawyers, Shri Vijay Hansaria and Shri A. Gupta. In fact, Mr. Vijay Hansaria is a constitutional expert and advisor on District Councils having worked extensively in the Administrative and legislative Councils across North-East region. Also present were, Shri Dilip Ninusa, Chairman of Dima Halam Daogah (DHD) and Shri Nirmal, member of Dima Hasa Council who shared a first-hand experience and challenges in the implementation the 6th schedule act. There were ‘more eminent personalities’ and few lesser mortals including yours humbly trying to grasp the discussion.

Unfortunately, a major dampener in the discussion was the unavailability of ground data from Darjeeling. As it was discovered during the discussion, there is a sea of differences between the socio-political conditions in the North-east and Darjeeling, including land-holding rights, population composition, tribal laws and kinship, among many other things.  The organizers too repeatedly acknowledged the lack of data required for the discussion and were quick to assure of more such discussions with proper data, which is yet to materialize.

The two-hour session was quite informative, but the resource person could not take questions effectively, simply because they were unaware of the social set-up in Darjeeling. The leaders of the Sixth Schedule councils pointed out that while the Act helps to safeguard their tribal identity and rights, the budget and funding provided to the councils are inadequate to meet the expenses as required. As the funds for Sixth Schedule are outside the annual financial plans and non-budgeted, the councils are at the mercy of their parent states for the funds. The information provided by the invited speakers was indeed enlightening and the session was very promising until the floor was open to public questions.

As a layman, it was challenging to understand the different arguments. However, at a superficial level, there were a few prominent questions that were left unanswered. I am summarizing the discussions as per my understanding and I stand corrected for anything I have misunderstood.

First, the provisions of Sixth Schedule were created solely for the purpose of the tribal districts of Meghalaya and Mizoram Districts of erstwhile Assam. The provision has never been tried outside the North-east region and remains in effect only in certain areas of Assam, Mizoram, and Manipur.

Second, the composition of the population is different between North-east and Darjeeling regions. The society is homogeneous without complex structures, and almost everyone with mongoloid appearance belongs to one or the other scheduled tribe. The society and population composition of Darjeeling district includes both scheduled tribes and non-tribal people, with the non-tribal in a huge majority.

Third, in the context of the North-east, land and territory is important for the definition of tribal identity. The people completely own the land under tribal laws, with local Kings as custodians of their ancestral properties. In Darjeeling, the land-holding pattern is completely different, with most of the land owned by individuals and tea gardens. Historically, the people have had very little say in their land and how resources from the land are managed.

The most important takeaway for me from the session was that while Sixth schedule, with all its flexibility and provisions to add and modify the act, is perhaps the best tool to safeguard identity, culture, and linguistic heritage of the scheduled tribes. In the absence of a state for every tribe, which looks impossible in near, the Sixth Schedule recognized guarantees legislative, economic, and judicial (for tribal law practising communities) authority for the protection and advancement of the communities. However, to pick the Sixth schedule as a template from the North-east region and implementing the same in Darjeeling could in fact invite more new worries rather than solving the issue. It can easily fuel ethnic nationalism, fight for reservations, and caste politics which is simply not in the interest of Gorkhaland.

In conclusion, the constitutional experts who were invited were also unaware of many things – the population demographics, land-holding patterns. They clearly stated that they will need more data and understanding of the ground realities to suggest or recommend anything. The sixth schedule, as it is in Northeast, cannot be applied to Darjeeling. Yes, if the proposed 14 tribes of Gorkhas are considered under tribals, there could be more positive outcomes to such discussions.

On the question of granting Union Territory, the expert panel had nothing much to add because the case of UT has not been on the discussion table as yet. The question here is not about having options to choose from, but a strategy to clearly define and work towards what the people want. There are no steps to a statehood movement which states ‘take this first, and then we will give you something else follow later’.

The bigger concern is why should people settle for something that is not their aspiration in the first place. In a democracy, it is upon the people to decide and pursue what they want from their Governments, and not the other way around.

Bimal Gurung Slides: From leader of Gorkhas to TMC Mouthpiece