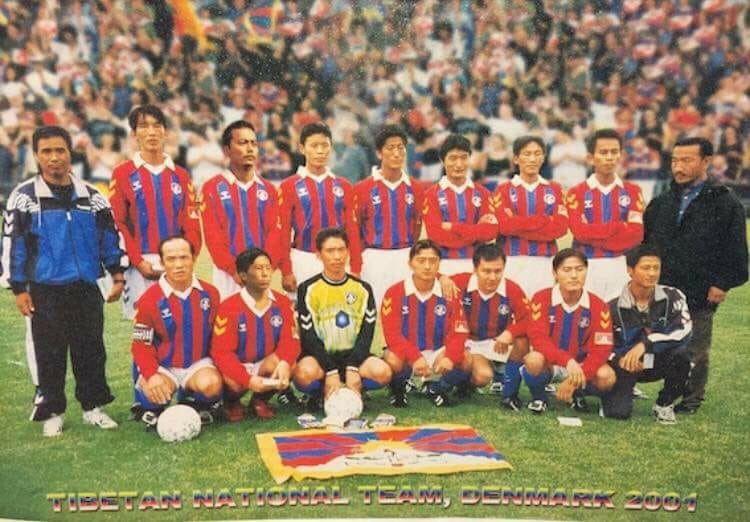 It was in the summer of 1986 when I was just about twelve years old that I watched my first World Cup. It was at a neighbour’s house uphill, who owned one of the few colour TVs back then. Those beautiful sets that had to slide wooden door to keep it encased. A rarity and an opulence only handful of people owned in the village I grew up in called Bhutia Busty, mushroomed up on a face of a hill that plateaued on Chowrasta, a retreat-able gathering place, where six roads meet and where the sun-scorched, stressed denizens of the Indian plains, come to soak in the pleasant Darjeeling cool sun with its fresh pine breeze. It’s also a time in 1986 less than thirty years since Tibet lost its independence that many Tibetan refugees hoped to retrace their footsteps back to their homeland.

Since all the World Cup fixture matches were played on the Western Hemisphere and due to time differences thereof, matches were telecast around the middle of the night on Indian national television broadcast way before satellite dishes came. We would wake up all night with bloodshot zombie eyes to witness the game live and at the same time, pray like the desert would for the rain, to keep the electricity from blacking out. Load-shedding was a common problem and character trait of a Third World utility problem we endured.

Darjeeling town like most football craze cities that you would normally relate to, the fanaticism and obsession that you get to see from the slums of Calcutta to the beaches of Rio, would be in full celebration mode month before the kick off and every corner of the street would be draped in fluttering Argentinian, Brazilian or the German flag, the local favorites. Every locality small football clubs would raise donations to pay for the banners and festivities. Lotteries would roll for the highest scorer of the tournament and winner of the World Cup and so forth. Everyone was captivated for a month on this football fest.

On one occasion, I have seen a huge cardboard cut size mannequin of Maradona on a syndicate, with candles and burning incense, white scarfs and flower garlands, to wish him and the Argentina team well on the finals and they would eventually end up winning the World Cup.

I would walk up the hill accompanied by my younger brother and my childhood friend into the wee hours of midnight to the whistle of crickets, screaming foxes and barking of the stray dogs into the flickering streetlamp with its bulb abraded and yellowed by the elements, protesting tirelessly to be replaced by the corrupt municipality, ambling on unpaved road and narrow alleys flashing the long Indian torchlights to knock a welcoming neighbors door with the color tv packed to the walls. Many brought their own stools to sit on and pillow to lean on too. It’s a time before the smartphones and the room would be lively with exchanges of jokes, social interactions and laughter.

There were times when we missed our favourite matches we were dying to watch despite entrusting our parents in vain to wake us up. We would all fall asleep, only to wake up to the cry of the rooster, at a time when alarm clocks built into our phones these days were things of the future one could faintly imagine.

There were other times when we would be awake just until the match started and only found ourselves snoring to glory, due to the toll on our bodies of a previous day football game, mania unleashed on the fields because of the World Cup fever. We would role play avatars of one’s own favourite players and I was already living and breathing Diego Armando Maradona. I handmade my own Argentina jersey and wrote with a black marker as big as I could the number 10 on the back.

Since I have been living in the States now for almost two decades, the word football could have a different connotation and meaning. Just like bats are flat for cricket and rounded for baseball, football here is for giant big players, made even bigger by those shoulder pads and who wear steel helmets and run with the ball in hand as many yards as they could before they get crushed by a three hundred pound defence linebacker.

But since I am here catering to my people, I would love to use the word football for what it actually means, since I loathed to call this beautiful game soccer. And talking about championships, the real world champions unlike the self declared world champions of NBA, NHL and the MLB, are the ones who are the winners of the FIFA World Cup, held every four years, where over hundred nations compete through a brutal competitive continental qualification games and many nations fail to qualify during those qualification rounds that are played two years in the making. They are the real world champions and not some winner of some world champions where only states that make up a nation play.

Football is imprinted into our DNA just like Buddhism is. Even our monks find some respite from their hard spiritual quest and the tiresome memorization of ancient scripts to the mundane special joy of this game. They can’t wait to pull their robes and tie them around their waist to kick that ball into the corner of their imaginary nets or run outside the monastery to catch a glimpse of the score of the games shown on tv. An even corporate behemoth like Pepsi has tapped into this secret obsession embedded in the monks and has been able to monetize them through their advertisements.

For historical context, football was brought to Tibet in the early part of the twentieth century by the British Raj. Long story short, Tibetans on the sidelines watching the British and the East Indian Company Indian soldiers by the garrison quickly fell in love with the game. A known first Tibetan football club known as the Lhasa United was formed around 1936 and along arose many regional teams too. Lhasa United also played against the British mission. It’s also said the Kham football team also played against Chinese provincial teams and that they had a small stadium that was later destroyed when Mao came into power along with hundreds of monasteries.

The obsession for football also spiralled into the diaspora world, where GCM tournament, a prestigious one that is played every year between many Tibetans teams from all over. There is also official Team Tibet that has played many international games barring FIFA sponsored ones.

I would believe if Tibet was an independent country, we would definitely have a strong team that would easily compete with the Asian giants like that of Japan and South Korea. Our feudal days like that of the rest of the world, albeit hundred years later would evolve with the fast-changing world around and eventually pave way for public engagement and democracy, had the hungry Red Dragon not swallowed us, when the rest of world was busy freeing the chains of colonial yoke and minting new flags and composing new national anthems.

With their tough physique and legs for football, the fire in the belly and the passion for the game, the Tibetan football world would emerge victorious on many fronts. Even though with a tiny disenfranchised population, Tibetans inside and outside and some who trace their ancestry to Tibet have excelled in many sporting fields, from mountain climbing to football, from marathon to kickboxing and many if not few made a name for themselves sadly playing under a different country’s flag and I don’t blame them but the tryst of destiny they were caught in.

Every time during the World Cup, when the players come out of the dugout with tiny hands escorting them and that familiar FIFA symphony played in the background and when the national anthems are played, I am sore at heart and left imagining how much of an adrenaline rush would that be if Tibet would actually play the World Cup and our national anthem would be orchestrated with the dignified grace and our triumphant players would walk gracefully. And, when that camera starts moving from one player’s face to the next with their hands in their chest, the emotions run so high that only passionate citizens of a stolen country could only imagine.

Our boys from Team Tibet will soon be in London to play the Conifa tournament, a mini World Cup of a sort and I want to take this opportunity to wish them all the luck and I want them to roar like the snow lion, bark like the Tibetan mastiff, play defense like the Yak and run like the Tibetan antelope. I also want to for the fun of the game predict that this World Cup 2018 will be won by France. But since the first kiss is the deepest, my support for Argentina and Messi will always remain.

Be the first to comment on "Dreaming World Cup for Tibet"