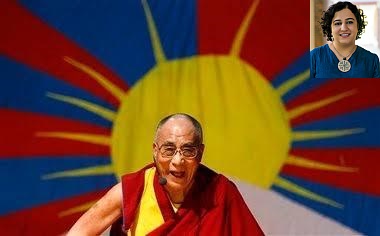 His Holiness The Dalai Lama


17 March 2019 marked the 60th anniversary of His Holiness the Fourteenth Dalai Lama’s flight from Lhasa into India. The specific conditions of his escape notwithstanding, he was treading a path that many Tibetans had traversed before him. Among these were traders and aristocrats, laity and monastics, and his predecessor, the Thirteenth Dalai Lama.

To safeguard British trade interests in Tibet and because of its strategic importance in the context of the Great Game and the two World Wars, the British Indian Government maintained a Mission in Lhasa, and trade agencies in Yatung, Gyantse, and Gartok. The latter rendered assistance to Indian traders in Tibet, and also provided valuable intelligence.

The Political Officer stationed in Gangtok kept a close watch on developments in the Himalayan states of Bhutan, Sikkim, and Tibet. In 1910, when the Manchu general Zhao’s army crushed Tibetan resistance in Lhasa, the Thirteenth Dalai Lama was informed he might be taken a prisoner, and fled from Lhasa to India. The then Political Officer Charles Bell was appointed to look after him. He stayed at the Bhutan House in Kalimpong for three months, the base of the Dorji family, which held the hereditary position of Prime Minister of Bhutan.

Aristocratic families in Bhutan, Sikkim, and Tibet were closely tied in networks of monastic patronage, intermarriage, and trade. Facilitated by the Political Officer, children from these families often studied in English schools and colleges in the colonial capitals of Simla and Calcutta, as well as cosmopolitan centres like Kalimpong and Darjeeling near Sikkim, and also at universities in England.

SEE ALSO:  Yet, Here is a Good News!!
Powered by Inline Related Posts

Tibetans could enter British India without a passport, visa, or any entry permit; the same was true for Indians travelling into Tibet. The British Indian government used this concession as a bargaining tool in trade and political negotiations. The last British Political Officer in Sikkim, A.J. Hopkinson, had ruefully observed:

“Tibetans get passport-free entry into India, which is more than the Chinese or French, or I myself get” (8 May 1947).

The colonial state tolerated a degree of ambiguity about its borders. It was not uncommon for people living in the border areas to have multiple and overlapping political allegiances. Nomadic populations in Tibet, as well as traders and monastic, for example, were often mobile. Even while attempting to establish clear borders, such as the McMahon Line in 1914, the British Indian state had to contend with what David Gellner has described as “layers of uncertainty… because of policy disagreements,… [and] political volatilities in regions.”

In the first decade after Independence— as the Union of India was still consolidating its territory and defining its borders—  this cartographic uncertainty gave rise to profound territorial anxiety, which was stoked by Chinese military advances into Tibet, and along the border with India. When the Government was questioned about its preparedness against Chinese military presence on India’s borders, the Deputy Minister of External Affairs, B.V. Keskar admitted the hitherto unfinished task of border-making and administration to the Lok Sabha on 14 February 1951: “The fact is certain that certain Chinese soldiers did penetrate into our territory. But it is not certain whether they were aware of the fact that it was our territory.”

‘They Simply Come and Go, and Do Not Report to Us’

Confronted by the magnitude of political disturbances in Tibet, the Indian Government had to reconsider its open policy for Tibetans. It required Tibetans to obtain permits for entry and stay in India, and those who were already here were required to register themselves as foreigners. In April 1951, four months after the new regulation had come into effect, over three-fourths of already resident (1433 out of 1939) and recently-arrived Tibetans (2650 out of 2835) were concentrated in the state of West Bengal, which bordered the kingdoms of Nepal, Sikkim, and Bhutan.

Despite the change in regulation, entry permits were relatively easy to acquire at the time and the Government did not take any particular steps to discourage the increasing numbers of Tibetans coming to India in the wake of political changes in Tibet.

A day before the Dalai Lama reached India on 31 March 1959, Nehru pointed out that it was common for Buddhist monks from Ladakh to travel to Lhasa for religious instruction. Four head abbots from Leh in Lhasa, and anywhere between 30-100 monks were thought to be in Tibet. Nehru was unable to provide specific figures to the Lok Sabha because they were not required to register: “they simply come and go, and do not report to us.”

All this would soon change. Archival records of Tibetans coming into India after 1959 reveal the Indian state’s growing anxiety about the rise of Communism in the region, as well as its concern about protecting the long eastern border with China. This sensitivity to historical interconnectedness and the porosity of borders would make way for a gradual tightening—  of borders, and of relations.

Writes: Swati Chawla, She is a historian of modern South Asia and a fellow at the American Institute of Indian Studies. She tweets @ChawlaSwati

This article as originally published in The Quint.

1 Comment on "On Historic Trails: India and Tibet Have Always Shared a Special Bond"