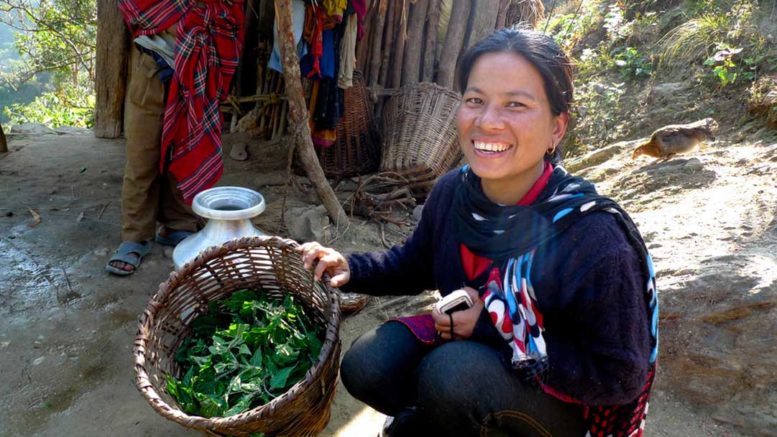 
People around the world create fences, walls, and boundaries, not so long ago in our villages of Darjeeling and Kalimpong we did it too, although naturally!

Naah! Those days we didn’t create a fence of concrete, metal, or some exotic plants, but simply a natural divider, no thief apart from the “Jhushuley”(larva/caterpillar) could even dare to cross or even touch. In every field, “Bari ko Simana” the protector of our prized crops, the mighty “Sishnu“(Nettle) stood guard. Even the most notoriously famous “Suntala Chor” of the village couldn’t muster enough courage to battle it out.

The bravest of the brave, armed with a chimta, doko, namloo and gloves made out of gunny bags, Maam and Meme came out and carefully plucked the “Sishnu” like a seasoned Gardner, as if, pruning their favourite exotic plant. Actually, all these acts were done to feed the livestock people had in the village, boil it along with flour and Loo! your Khashi would be the strongest one, ready for Dashain and your Sungur would have the best bosoo around its neck, fetching a good price in the market, supplementing the meagre income one had.

If I recollect correctly, there used to be times when two deadly weapons, Sishnu and a small khukuri, would be placed carefully in the humble “kokroo”(baby cradle/cot made out of bamboo) of the newly born, that cried inconsolably. The Sishnu was thought to be so powerful and potent that even the most jandas of bokshi (a powerful witch) and the most demonic of bhoot (ghost) would never dare to touch the child.

SEE ALSO:  Will the "Good News" ever come?
Powered by Inline Related Posts

Sadly with modernization, plastic crèches/cots have replaced the simple organic Kokroo and with it so has the practice of placing the two deadly weapons forgotten.

In the Hindu-Buddhist, shamanistic ritual system, roughly consisting of Jhakri, Dhamis, “Mata Utreko” and many others, Sishnu was the ultimate weapon to defeat the evil spirit.

Both the possessed and the Shaman would chant and shake vigorously, on the rhythmic beats of the dhyangro (drum) and bells, while the room filled with the unbreathable smoke coming out of the burning juniper. Achheta (rice grains)would be blessed by the shaman and thrown at the possessed.

“Apuuii”!! still the evil spirit didn’t leave the innocent, “tesko bajey ko ta” “lu khaa” out came the ultimate weapon: “Sishnu-Pani ko chutai”. With the treatment of the Nettle-Water combo, the evil spirit would take the route of “taap-singh”(run away) and never bother the innocent natives.

Sishnu was the Brahmos Missile, and more powerful than the Iron Dome of Israel that could combat and control spirits, ghosts, and witches.

I don’t mean to keep up the superstitious customs, nor am I demeaning the shamanistic cultures (anthropological) but just want the readers to travel back in time when life was more simpler and pure like the Kokroo and hill folks merrier!

Ahh! Let’s change the topic, it’s getting too complicated, let’s walk down memory lane now. Going to swim in the khola (rivulet) would be the best pastime during our childhood and plucking ripe oranges, guavas, aruchas or any seasonal fruit from the orchards of others would be the accompanying ritual. Now doing this meant trouble as sooner or later one would definitely encounter a brush with the sishnu and screams of pain “aatha polyoo” would be heard loud and clear. The only thing that would undermine/heal the pain and the “damra” of the sishnu “poling” would be the ultimate winter medicine: Signan(snot)flowing naturally due to the sting. If the one who got stung, didn’t have the required dose of the Signan there would be a perennial Signaney friend in the group whose waterfall never stopped cascading from his red nostrils, his medication would come in handy for everyone. Such were the times folks!

Old-timers would say the flower of the Sishnu “sishno Ko daal” was very helpful in controlling high BP and studies on the common Himalayan nettle prove them to be true, also, from a nutritional standpoint that Sishnu has more calcium than a glass of milk, they say!

Sishnu and the culture of our hills and its people are so much intertwined, we too are similar to the Sishnu as a community, sturdy and brave protecting our country from invading enemies we sting when it’s needed. We people of the hills are too emotional and the modern-day countless jhusuley’s attack us every season, eating our leaves, yet we as a community are sturdy as the nettle, remain here.

By the way, if the politicians are fooling us now and again show them the part from this article where the evil spirit runs away at the sight of the sishnu-pani Ko chutai! Especially those who might fool us again in the name of Tripartite Talks!! Hopefully, they won’t hai!!

Prudent Voters Can See the Change in the Horizon

Be the first to comment on "Memories, Sishnu Culture, and Politics of the Hills"