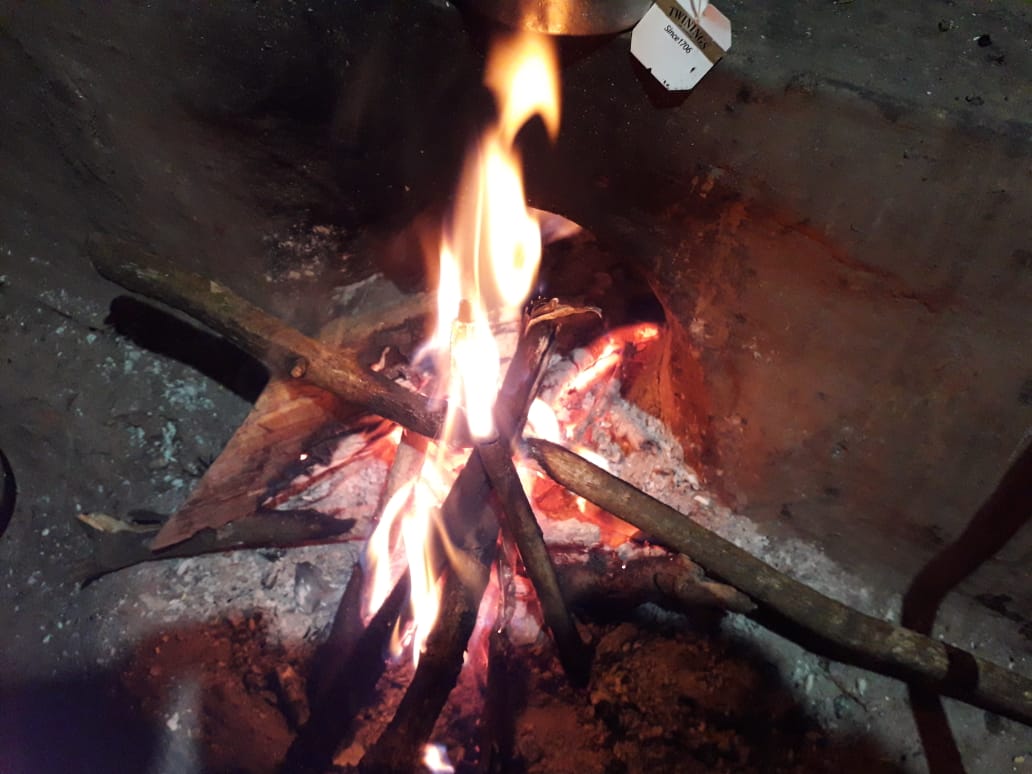 Pic by Dipzo Gorkha: Dhiren enjoying the warmth of his hearth

Dhiren is deep inside his bed, cursing the cold weather of Darjeeling. You should already be knowing Dhiren, our “chuksa” guy with the red Sumo Gold and a mixed expression, sometimes jolly, sometimes angry and most of the times lost in his own little world. These days Dhiren doesn’t go to “Badi ko dokan” due to the bone shaking cold, instead he has brought a full-stock of Teen Pani at home itself, that solves the major issue of having to go outside in this biting cold.

So there on the table stands his holy mug with the holiest elixir, hot – the way he loves during winters. A plate of usineyko isskus, neatly peeled and sliced, with dalley ko acchar by its side, all neatly placed beside the mug. Dhiren’s concentration was however deeply set on his phone screen. By the way, Dhiren now has a smartphone and he is also well acquainted to the world of social media. He no longer buys newspapers, and depends completely on the 5.5 inch of his newly introduced world.

The device proves a better deal for Dhiren when mixed with his Teen Paani, as he is better able to express his likes, dislikes, opinions and frustration in form of comments. He goes by the name “Syakri Kancha” on Facebook, and he is on, he has made his way into the intellectual world of with lots of effort, including writing pages long rants, getting abused and scolded, avoiding conversations because of his weak understanding of English, and even flirting immensely with a fake account. But during the course, he has drawn a lot of knowledge, follows all the leaders and intellectuals and follows every other news portal with the word Darjeeling, Gorkhaland, Gorkha or Hills in its name.

But today, Facebook is about something else, it is about snow in Darjeeling after almost a decade. To put up in better words, Dhiren hadn’t even completely learnt driving when it had last snowed.

Dhiren’s timeline is flooding with pictures and videos of snowfall. But unlike other usual youths of the town, Dhiren isn’t excited. The most he is willing to do is to open his window and take a quick peek. He decides to extend his engagement with the event by casually hitting up a gesture of amusement to the Bada who lives in tallo ghar standing by his door – “Balla hui paryo hai Bada”, he says, and he instantly regrets. Bada starts up with his usual – “Yo ta kei haina, hamro time ma ta….” and before regretting any further, Dhiren slowly shuts down his window.
He better decides to stick with his Teen Pani enjoying snowfall digitally on Facebook, though he knows that others would give up everything to just stand under the snow.

By others, he means the people outside…. that guy strolling at Salbari, that girl slogging hard in her office at Bangalore, the student eating Maggie in his hostel, that person earning his and his family’s life far away, everyone belonging to the hills except for him.

It’s his brother-in-law, his all weather partner and a close confidant. Dhiren doesn’t mind losing few mugs of his all precious for him. In fact, he often taunts his wife saying that her brother was the only good thing he could get from their marriage, except of course their child. A hot mug is instantly poured.

Dhaney, the brother-in-law, takes a bit of the isskus dipping it generously dipping it into the dalley ko acchar and says, “Koslai cha haw vena yo pali anta? Moh ta Doctor nai thik lagdaicha.” Dhiren’s expression changes in half a sec, as if someone had squeezed a dozen of lemons in his mouth in one go. Dhiren had no grey thoughts on this issue. He would say he would rather migrate to Bangladesh than to waste his vote on such “Doctors”.

Dhaney quickly reminded him that something could still come up at the winter session of the parliament, to which Dhiren responded saying, “4 barsa MP rakhera chai vote awney bela ma lollipop diyera huncha kaile?”

Dhaney understands what Dhiren wanted to say. He didn’t engage any further with the topic and pours some more Raksi for both.

“Narayan Gopal ko sundim na haw vena yeso” – he says, and thus they continued with the night, enjoying the warmth of their hearth. Pic by, Dizpo Gorkha: Dhiren enjoying the warmth of his hearth