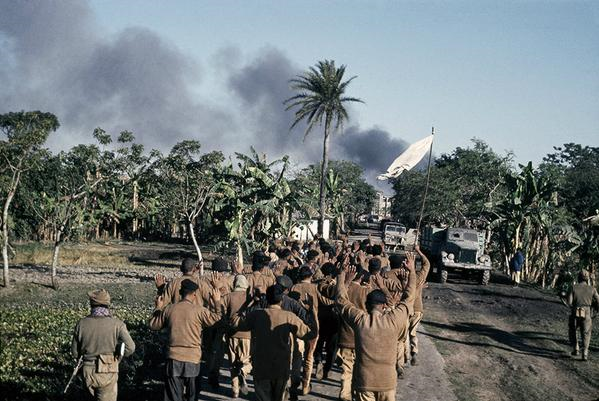 
To those who don’t know about it Vijay Diwas is when 93000 Pakistani army surrendered to 5000 Indian soldiers on Dec 16 1971, we are celebrating the glorious role played by Gorkhas soldiers.

Among the various paltans that participated in the war for Bangladesh liberation, the Gorkhas have stood out through their unparalleled bravery, sheer grit and determination, and won the platitude of laurels in not just India, but across the world.

Highlighting three major battles that the Gorkhas fought and won….

Among the Gorkhas, the Fighting Fifth 5/11 GR won for themselves the Battle honour “BOGRA” for itself. In fact the battle honour Bogra and theater honour East Pakistan was bestowed to the 5th only.

In the Indo – Pakistani war of 1971 the 5th battalion was instrumental in liberating Bangladesh, In the operations of East Pakistan, the 5th had secured the Bogra town for 20 mountain division, in one of the most daring operations Lt Teja Bedi and his Gorkha troops had single-handedly captured the headquarters along with the Commanding Officer and RMO of the prestigious Baloch Regiment of East Pakistan.

The regimental flag of 52 Baloch Regiment is still HUNG UPSIDE DOWN in the officer’s mess of the 5th and is one of their prized possession.

Vijay Diwas and 4/5 Gorkha Rifles: The Battle Fought With Only Khukuris

One great initial battle of the war fought at Atgram to break the outer crust of Pakistani defences in the East opposite Sylhet sector needs revisiting. The battalion tasked was 4/5 Gorkha Rifles (Frontier Force) which went on to capture Gazipur and eventually single-handedly took the surrender of the Sylhet garrison.

Not before and not since has any battalion launched a full scale assault employing just the Khukuri and guile alone. After getting their orders, by 5am the fierce Khukuri assault had silenced Pakistani Maj Alvi’s Bravo Company. In the mopping up, nearly 45 bodies were found scattered around the main position.

The 4/5 Gorkhas were not to be left behind and were the 1st Indian troops to mount a Heliborne operations.

On a conservative estimate, the Heliborne Operation of Sylhet Gorkhas [4/5 Gorkha Rifles (Frontier Force)] made it possible for Indian Army and Mukhti Bahini to reach Dhaka much earlier than planned; at least by 8 days.

On the 16th, when the surrender ceremony was going on at Dhaka, Sylhet Gorkhas were celebrating with a toast, in honour of three fold success of the Battalion:

But the fourth larger toast, unknown to them at that time, was reserved for surrender at Dhaka, which was thought unattainable.

SEE ALSO:  Why A Separate State Of Gorkhaland?
Powered by Inline Related Posts

For ‘Early Dhaka Surrender’ was made possible by Sylhet Gorkhas tying down the Pakistani Meghna River Brigade (313), in addition to 202 Pak Infantry Brigade at Sylhet from the 7th to the 15th.

However, the degree of valour and contribution to the early creation of free Bangladesh, credit also goes to the men of the Sylhet Gorkhas, but not without a price. The cost of glory over the 27 days (20th November to 16th December) was not meager.

Sylhet is the Battle Honour of The Sylhet Gorkhas and East Pakistan as Theatre Honour and nobody can deny that Heliborne Operations by Sylhet Gorkhas lead to early surrender at Dhaka in December 1971.

While others may forget – WE REMEMBER!!

Martyrs’ Families to Receive Compensation Only After Martyrs’ Sacrifice Honoured