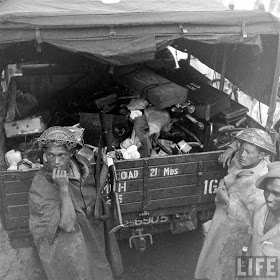 As the nation celebrates 143rd Birth Anniversary of Sardar Vallabhbhai Patel, we extend our gratitude to him and the brave Gorkha soldiers who shaped the contours of India post-Independence with their blood and toil.

Had it not been for the iron will of Sardar Patel and the iron fist of brave Gorkha soldiers, perhaps the contours of our nation would be very different today.

Among the difficult tasks handed out to Sardar Patel was the integration of over 500 princely states into the Union of India. Hyderabad held out and refused to join the union. Here is how Sardar Patel and the Gorkhas took care of that problem.

Operation Polo, the code name of the Hyderabad Police Action was a military operation in September 1948 in which the Indian Armed Forces invaded the State of Hyderabad and overthrew its Nizam, annexing the state into the Indian Union.

The conflict began after Nizam Osman Ali Khan, Asif Jah VII decided not to join the princely State of Hyderabad to either India or Pakistan after the partition of India. The Nizam’s defiance was backed by Qasim Razvi’s armed militias, known as Razakars and had the moral support of Pakistan.

After a stalemate in negotiations between the Nizam and India, and wary of a hostile independent state in the centre of India, Deputy Prime Minister Sardar Patel decided to annex the state of Hyderabad. He sent the Indian Army and the Hyderabad State Forces were defeated within five days. The operation was called “Operation Polo” because at that time, Hyderabad state had some 17 polo grounds, the largest number in India.

The first battle was fought at Naldurg Fort on the Solapur Secundarabad Highway between a defending force of the 1st Hyderabad Infantry and the attacking force of the 7th Brigade. 2/1 Gorkha Rifles, 1 Mewar Infantry, and ancillary units attacked the town of Tuljapur, about 34 km north-west of Naldurg. They reached Tuljapur at dawn, where they encountered resistance from a unit of the 1st Hyderabad Infantry and about 200 Razakars who fought for two hours before surrendering.

Further advance towards the town of Lohara was stalled as the river had swollen. There were further incidents in Hospet – where the 1st Mysore assaulted and secured a sugar factory from units of Razakars and Pathans – and at Tungabhadra – where the 5/5 Gorkha attacked and secured a vital bridge from the Hyderabadi army.

The positions were assaulted by the 2/5 Gorkha – veterans of the Burma Campaign – and was neutralised with the Hyderabadis taking severe casualties. At the same time, the 3/11 Gorkha Rifles and a squadron of 8th Cavalry attacked Osmanabad and took the town after heavy street combat with the Razakars who determinedly resisted the Indians.A force under the command of Maj. Gen. D.S. Brar was tasked with capturing the city of Aurangabad.

Leaving a company of 3/11 Gorkhas to occupy the town of Jalna, the remainder of the force moved to Latur, and later to Mominabad where they faced action against the 3 Golconda Lancers who gave token resistance before surrendering. At the town of Surriapet, air strikes cleared most of the Hyderabadi defences, although some Razakar units still gave resistance to the 2/5 Gorkhas who occupied the town.

The retreating Hyderabadi forces destroyed the bridge at Musi to delay the Indians but failed to offer covering fire, allowing the bridge to be quickly repaired. Another incident occurred at Narkatpalli where a Razakar unit was decimated by the Indians.

The task force under Lt. Col. Ram Singh moved towards Zahirabad at dawn, but was slowed down by a minefield, which had to be cleared. On reaching the junction of the Bidar road with the Solapur-Hyderabad City Highway, the forces encountered gunfire from ambush positions.

However, leaving some of the units to handle the ambush, the bulk of the force moved on to reach 15 kilometres beyond Zahirabad by nightfall in spite of sporadic resistance along the way.

In the early hours of 17 September, the Indian army entered Bidar. Meanwhile, forces led by the 1st Armoured regiment were at the town of Chityal about 60 km from the capital city, while another column took over the town of Hingoli. By the morning of the 5th day of hostilities, it had become clear that the Hyderabad army and the Razakars had been routed on all fronts and with extremely heavy casualties. At 5PM of 17 September Nizam announced ceasefire thus ending the armed action.

Today we pay tribute to Sardar Vallabhbhai Patel and the Gorkha Bravehearts who helped shape India at such a crucial time.